MPs back a motion asking German government to closely monitor and counter the so-called nationalist Grey Wolves group, following France which recently banned the movement Turkey has repeatedly said does not exist.

German lawmakers have called on the government to consider banning Turkish associations linked with the so-called Grey Wolves movement, shortly after France outlawed the group.

MPs in the lower house accused the group on Wednesday of harbouring a “nationalist and racist ideology”.

The German Bundestag backed a motion asking the government to examine a ban on it.

MPs voted with a clear majority for a motion drawn up by the Green and Left parties, and backed by ruling parties, to urge the government to “closely monitor the activities of the movement in Germany and resolutely counteract them with the means of our constitutional state”.

Turkey has denied the existence of the group, saying “there is no such movement called Grey Wolves”. Making decisions on the presumed existence of such a movement based on some individuals and their actions reflects a backward approach, a statement from the Turkish foreign ministry said.

At the root of these proposed bans are the German Democratic Idealist Turkish Associations Federation (ADUTDF) and European Turkish-Islamic Cultural Associations Union (ATIB) which could be targeted if the ban and related measures pass.

The motions initially submitted for parliamentary discussion urged several extreme measures to ban the Turkish “Ulkucu” or the Idealists group and any institution which could have links to them. The "Ulkucu" is often conflated with the Wolves.

The measures included exploring the possibility of banning any association or acting against individuals subscribing to Turkish nationalist ideologies.

They did not define any parameters to assess said ideologies with.

It also pushed for surveillance of social media for related propaganda and of nationalists in Germany and Turkey.

Some 13 percent of 21 million people with migrant backgrounds in Germany originate from Turkey.

Monitoring those associated with individuals suspected to be "Ulkucu" or Grey Wolves – often identified by a salute also used by other groups – raises concerns of unnecessary policing of German-Turks. The salute and the Wolves have been connected to Turkey’s Nationalist Movement Party (MHP).

MPs from Germany's governing CDU/CSU parties, Social Democratic Party, The Greens and the Free Democratic Party all back the stringent measures, and want the government, Europe and international partners to take “all necessary measures to reduce the influence of the "Ulkucu".

Germany's opposition parties have previously urged the government to follow the lead of Paris that banned the Wolves.

“We should take the right reaction from France as an opportunity to ban the Grey Wolves as the largest right-wing extremist movement in Germany,” said Christoph de Vries, a lawmaker from Christian Democratic Union, Chancellor Angela Merkel’s party ahead of the vote.

France said it had disbanded the Grey Wolves on November 4, two days after announcing a ban against the Turkish nationalist group.

Interior Minister Gerald Darmanin said in a tweet the group "incites discrimination and hatred and is implicated in violent actions".

The step follows tensions between Turkish President Recep Tayyip Erdogan and French President Emmanuel Macron on a number of geopolitical flashpoints and France's attitude towards rising anti-Islam sentiment in the country.

After the France ban, Turkey said saying the "freedom of association, expression and demonstration of the Turkish community in France should be protected in accordance with universal human rights."

Grey Wolves ban also comes against a background of sharp tension in France between its Armenian and Turkish communities over the conflict in Nagorno-Karabakh in Azerbaijan.

Turkey has strongly backed its ally Azerbaijan in the conflict over the region that is part of Azerbaijan but has been controlled by Armenian separatists since a 1990s war as the Soviet Union broke up.

The law banning the so-called Grey Wolves salute in Austria came into force in March 2019.

In December 2018, the Austrian parliament accepted the law banning symbols of "extremist organisations" in the country to block terror propaganda.

People violating the law in public areas are fined up to $4,553 or given a-month prison term under the amended law.

Violators may face $11,386 in fines or a six-week jail term if the breach of ban is repeated.

The ministry called on Austria to "correct this mistake," saying it “deeply offends bilateral relations between Turkey and Austria."

READ MORE: Turkey 'stands with' Austria over shooting in Vienna 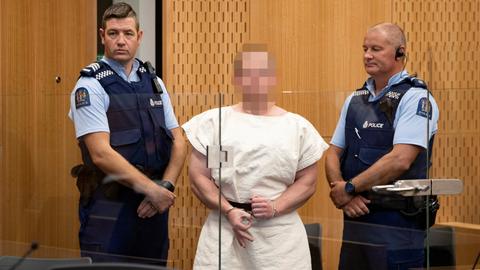