Germany's Social Democrat Foreign Minister Sigmar Gabriel says it will take his party time to iron out its differences with Chancellor Angela Merkel's conservatives to renew their coalition.

Germany's Social Democrat (SPD) Foreign Minister said on Thursday that his party would not be quick to agree to another grand coalition with Chancellor Angela Merkel's conservatives, as party leaders met with the president in a bid to end political deadlock.

Merkel is casting around for a coalition partner after her centre-right bloc shed support to the far right in a September 24 election. Her attempts to form a three-way tie-up with the pro-business Free Democrats (FDP) and the Greens failed.

The SPD, which saw its participation in a Merkel-led coalition government from 2013-17 rewarded with its worst election result in German post-war history, had been strongly opposed to another "grand coalition."

But under pressure from Germany's President Frank-Walter Steinmeier, SPD leader Martin Schulz has signalled willingness to discuss a way out of the political impasse.

SPD Foreign Minister Sigmar Gabriel told broadcaster ZDF no one should expect his party – still ruling with the conservatives in a caretaker government – to immediately agree to join another grand coalition now that talks to form a three-way "Jamaica" alliance have failed.

"We're now in a process orchestrated by the president, in which we first need to look at what the possibilities are but no one can expect it to go quickly," he said, adding that it was up to the conservatives to show what they wanted.

"The conservatives, Greens and FDP took months to get nothing off ground so I'd ask people not to put pressure on us," Gabriel said, adding that the conservatives needed to make clear what they wanted.

President Steinmeier, a former SPD lawmaker and foreign minister, hosted a meeting on Thursday that lasted just over two hours between Merkel, her Bavarian conservative ally Horst Seehofer and Schulz, as part of his efforts to facilitate the formation of a stable government.

The parties are all due to hold high-level meetings on Friday to discuss how to proceed. Sources in the SPD said all options would be discussed – ranging from a re-run of the grand coalition with the conservatives to new elections.

Merkel is set to hold a telephone conference with senior party members on Friday to discuss the meeting with Steinmeier but the conservatives do not expect the SPD to agree to official coalition talks until after its party congress next week.

The atmosphere has been soured by the decision of the conservative agriculture minister to back a European Union proposal to extend the use of a weedkiller for another five years – a measure opposed by the SPD. In reaction, SPD members have called for compensation and set various policy conditions.

He told the Frankfurter Allgemeine newspaper that the conservatives were trying to form a stable government with the SPD, if the SPD would agree. He added: "Only if this attempt fails do we need to think about other steps – not now."

FDP leader Christian Lindner, who walked out of attempts to form the "Jamaica" alliance, told newspaper Rheinische Post a grand coalition would be "more stable and more advantageous" than a Jamaica tie-up.

The business wing of Merkel's Christian Democrats called on Merkel to "seriously consider" a minority government, warning that another grand coalition would only be possible for the price of "even more unaffordable promises" in social policy. 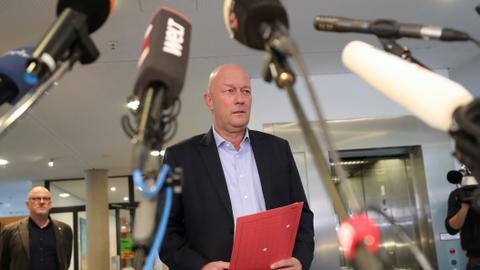