Hungary in tight spot as EU threatens to hold $7.5B funding

The EU and Hungary have been at loggerheads for months, with Brussels suspecting the government led by nationalist Orban of undercutting the rule of law and using EU money to enrich its cronies.

The European Commission's budget commissioner, Johannes Hahn told a press conference on Sunday that Budapest was expected to make "game changer" anti-corruption reforms in wake of the funding cut.

The development comes just days after European Parliament declared that Hungary was no longer a "full democracy" in a symbolic vote that infuriated Orban's government.

Despite being a EU member, Hungary has taken a neutral stance on Ukraine conflict and publicly criticised sanctions on Russia.

The money facing the axe comes from a fund, which helps member countries like Hungary upgrade infrastructure and improve economies.

Any action to suspend the funds must be approved by the EU member countries.

They have one month to decide whether to freeze Hungary's funds.

The commission is recommending that the member countries take until November 19 to allow Hungary more time to address the concerns.

Hungary has pledged to meet all of its commitments made to the commission to unlock the funding.

Gergely Gulyas, Orban's chief of staff, told reporters on Saturday that MPs would vote within days on measures designed to allay concerns about graft and a lack of transparency in public procurement.

The measures are expected to include setting up independent anti-corruption watchdogs to monitor the use of EU funds as well as steps to make the legislative process more transparent.

The conciliatory move from Budapest comes as the Hungarian economy faces increasing pressure from a weakening local currency and fast-rising inflation. Both have hit new records this year. 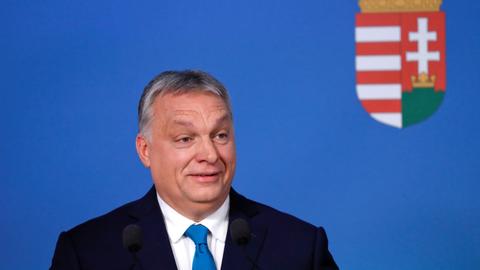