According to preliminary election results, the Hungarian prime minister has won a third consecutive term and his Fidesz party is poised to regain its supermajority in parliament.

Hungary's firebrand nationalist Prime Minister Viktor Orban appears headed for a third consecutive term as his party has taken an overwhelming lead in the country's key parliamentary election on Sunday, according to partial results.

Preliminary figures show Orban's Fidesz party has won 49.29 percent of the vote, with more than 80 percent of votes counted, the National Election Office (NVI) said, adding that turnout had reached 68.80 percent, up more than seven points on elections in 2014.

The surge in turnout was thought to likely favour the opposition Jobbik, a far-right party that has been moving towards the centre, and the centre-left Socialists.

However, results show Jobbik trailing with 19.94 of the vote, the Socialists on 12.19 percent and the environmentalist LMP party on 6.75 percent.

Jobbik's leader Gabor Vona may even fail to win the seat he contested in the northeastern town of Gyoengyoes. He says he is keeping his promise and will resign after Jobbik placed a distant second in the parliamentary election.

If borne out, Orban will likely seize on the results as vindication of his clashes with EU institutions over his hardline anti-immigration policies and rejection of the EU's refugee resettlement programme, as well as his moves to clamp down on civil society groups.

An Orban victory will also provide a fillip for other nationalist politicians and those on the far-right who look to him as an inspiration.

Fidesz may even be on track to win its coveted two-thirds "supermajority", which would grant it wide powers to press ahead with controversial measures and change the constitution.

Some of the previous measures passed using this mechanism include those that have put Orban on a collision course with Brussels.

They include what critics call the erosion of media and judicial independence, as well as its crackdown on civil society organisations linked to liberal US billionaire George Soros.

Orban accuses Soros and the organisations he funds of promoting mass Muslim and African immigration into Europe in order to undermine its Christian identity.

Orban's sometimes lurid rhetoric against immigrants resulted in February in a spat between the government and the UN's top human rights official, Zeid Ra'ad Al Hussein, who accused Orban of xenophobia and racism.

However, Orban's message struck a chord with some voters, such as pensioner Ilona Gubacsi, who said she hoped the result would mean "no migrants coming to Hungary and for things to remain as they are."

But in one student neighbourhood in the capital, where long queues saw voters waiting up to an hour to cast their votes, the mood was predominantly anti-Fidesz.

"We feel there is not enough freedom here, I know a lot of people who won't hang around if things don't change," said one voter who wished to remain anonymous.

The last few weeks of the campaign were marked by allegations of money laundering and corruption levelled at Orban's inner circle, often published in media owned by oligarch Lajos Simicska, an erstwhile Orban ally who fell out with him after Fidesz's 2014 election victory.

Orban avoided public debates with opponents or speaking to independent media, preferring instead to address supporters at carefully stage-managed events where he hammered home his anti-immigration message.

The opposition's campaign had focused on corruption and deteriorating public services, as well as the government's failure to stem a high level of emigration which has seen the country's population fall under the symbolic 10 million mark. 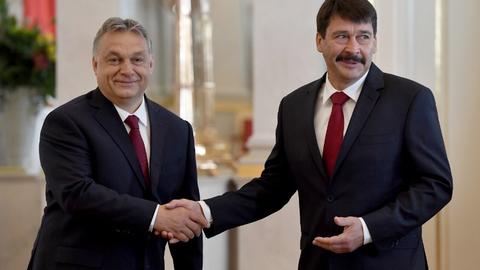