Two of the fugitives are wanted by Russia and one each from Denmark, Norway, Ukraine, Brazil, Cyprus and the United States. Six of the cases involved murders.

International police agency Interpol issued a public appeal on Monday to track down eight men wanted around the world from Russia to Brazil for murder and other crimes against women.

France-based Interpol made the appeal for fugitives to coincide with the United Nations-designated "International Day for the Elimination of Violence against Women."

The eight include two wanted by Russia and one each from Denmark, Norway, Ukraine, Brazil, Cyprus and the United States.

Six of the cases involved murders, while sexual violence, grievous bodily injury resulting in death, abduction and rape were also among the charges.

Interpol said in a statement that one in two women killed worldwide was murdered by a partner or family member, while one in three women and girls experience violence in their lifetime.

"The appeal ... is a stark reminder of how women and girls universally experience violence and abuse across the world," it said, adding that the suspects were all subject to Interpol red notices, which ask authorities worldwide to detain subjects.

Under unprecedented public pressure, France’s government pledged on Monday to seize firearms from abusive spouses and better train police as part of a broad national plan to reduce the number of women killed by their partners.

Such killings happen around the world, every day, so common that they go largely ignored, at least until now, French activists hope. France has among the highest domestic violence rates in Europe, which President Emmanuel Macron has described as “France’s shame.”

Monday’s announcement marked the end of a two-month government project to correct what Philippe called “dysfunctions” in France’s response to domestic violence.

“The first success of this effort is to break this chain of silence,” Philippe said on Monday.

At least 138 women have been killed by current or former partners this year in France, according to activists who track the deaths. Many had reported abuse to police.

The government will allocate 360 million euros ($396 million) next year toward implementing the new measures, which Philippe said he hopes will serve as “an electroshock in our society.”

Violence against women remains prevalent across the globe, and Monday's announcement was timed to coincide with the International Day for the Elimination of Violence Against Women. An NGO in Germany lit up buildings across the country in orange to mark the occasion, and South African President Cyril Ramaphosa pledged to reopen unsolved sexual assault cases.

A 2014 EU survey of 42,000 women across all 28 member states found that 26 percent of French respondents said they had been abused by a partner since age 15, either physically or sexually.

That’s below the global average of 30 percent, according to UN Women, a branch of the United Nations focused on gender equality and female empowerment. But it’s above the EU average and the sixth highest among EU countries.

French activists have waged an unusual campaign this year to pressure the government to address domestic violence.

They’ve glued posters with the names of victims over French city buildings and marched through the streets at each new death. Tens of thousands descended on Paris and other French cities over the weekend to demand stronger government action.

Among other measures announced on Monday, the government will create prevention programs in schools, codify “psychological violence” as a form of domestic violence, and open two centres in each region to house perpetrators so that victims can remain in their homes.

Philippe said on Monday that the government would create 80 new positions throughout the country for point officers to handle domestic violence complaints.

Schiappa, who spearheaded the government project, said police training is a priority.

For some family members of victims, however, the measures announced on Monday were too little, too late.

Noujoud-Asia Ghemri, whose sister was allegedly killed by her husband in April, called them “a drop in the bucket.”

Ghemri said her sister, Dalila, was shot by her husband in front of their home in Vidauban in southern France shortly after a judge ruled that he could continue to enter the house for work reasons. The husband was arrested in April and handed preliminary murder charges.

Preliminary charges under French law mean authorities have strong reason to believe a crime was committed but allow time for further investigation. The husband did not respond to online messages seeking comment.

Ghemri voiced disappointment that the measures did not include training for judges who handle restraining orders or specialised courts for domestic violence complaints such as those that exist in Spain.

“I think that they didn’t hear ... all the women and men that cried on Saturday during all the demonstrations,” Ghemri said of the government.

Feminist activist Caroline de Haas, who helped organise Saturday’s action, called the government effort “a disappointment” in a statement on Monday and said funding fell short of expectations. Activists had urged the state to dedicate at least a billion euros to the cause.

The European Parliament planned to observe a moment of silence for domestic violence victims and on Monday evening was to read aloud the 138 names of French women killed. 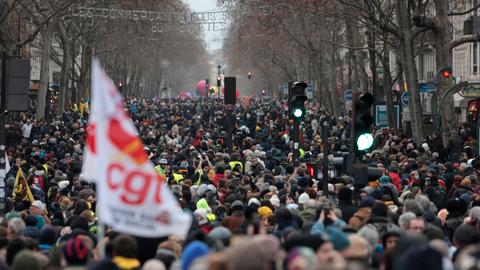