Tens of thousands massed outside government offices to protest a French proposal for solving North Macedonia's dispute with Bulgaria that is blocking the country's membership talks with the European Union.

North Macedonia’s government has said the proposal is a “solid base.” But the main opposition center-right VMRO-DPMNE party rejects the proposition, arguing it favors Bulgarian demands that dispute Macedonian history, language, identity, culture and inheritance.

“We do not need Europe if we have to be assimilated," opposition leader Hristijan Mickoski told reporters before the start of late Saturday's protest. “The answer is no to the latest French proposal.”

"If Europe is not ready to accept us civilised Macedonians where we belong, then we will wait until there are people who will understand that Macedonia and Macedonian identity is above and before all,” he added.

Bulgaria, a member of the EU, has insisted that North Macedonia formally recognise that its language has Bulgarian roots, acknowledge in its constitution a Bulgarian minority and quash “hate speech” against Bulgaria.

French President Emmanuel Macron announced earlier this week at the NATO summit in Madrid that he believed “a compromise solution” had been achieved, without giving details.

“I’m convinced we have found a compromise solution,” he said.

North Macedonia’s foreign minister, Bujar Osmani, said that “Macedonian language and identity” are protected by the French proposal and “it should be accepted as soon as possible” for the country to start the accession talks with the EU.

Bulgaria has used its power as an EU member to block North Macedonia’s membership, since all enlargement decisions require unanimous approval from the 27-nation bloc.

The dispute has also stalled Albania’s progress toward EU membership because the bloc is treating the pair as a political package. All three countries are NATO members.

The protest ended peacefully. Another one was planned for Sunday. 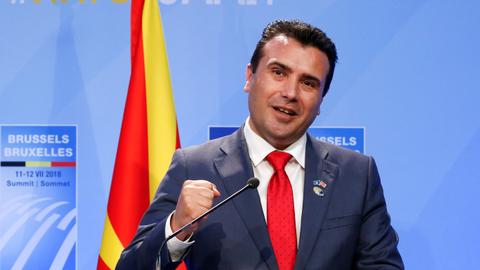