President Emmanuel Macron has said he has no fear of losing France’s presidential election, despite far-right rival Marine Le Pen narrowing the gap in opinion polls ahead of first-round vote.

Still, suspense is the watchword in Sunday’s voting to choose the top two among a dozen contenders, with a predicted low turnout that could help decide the race.

“I have the spirit of conquest rather than the spirit of defeat,” Macron, a centrist, said on Friday in an interview with RTL radio on the final day of campaigning.

But he cautiously added, “Nothing is ever a given.”

Le Pen, running in her third presidential race, has consistently placed second behind Macron in polls.

She appeared to close the gap even further according to latest polls, which have given a difference of between 1 and 6 points between the two.

If the polls mirror election results, Macron and Le Pen would repeat the 2017 scenario, squaring off in a second round April 24. Macron won by a landslide five years ago, taking 66 percent of the vote to Le Pen’s 34 percent.

This time, polls forecast the score to be much closer.

Le Pen has expended much energy to take the edge off her National Rally party in order to make it more appealing to voters.

She has softened her image even more and made purchasing power the centrepiece of her campaign, but hasn’t give up on her key themes: stopping the “migratory submersion” and “eradicating” political Islam.

“If Emmanuel Macron had enriched the country, excuse me but we wouldn’t be talking about purchasing power,” Le Pen said at her final rally on Thursday evening.

'Playing with the fears'

Macron denounced the far-right as “playing with the fears” of people, in an interview with French online media Brut on Friday evening.

“When I look at far-right views, whoever the candidate is ... there are lots of links to conspiracy theories, and for two years of pandemic, everything and its opposite was said, quite worryingly,” he said.

“And then, there are short-term proposals, sometimes not making financial sense at all or demagogic, like on purchasing power,” he added.

Macron stressed the unemployment rate decreased from about 10 percent to 7.4 percent during his term and vowed, if reelected, to reach “full employment.”

Macron chose the online media to do his last interview before Sunday’s vote in efforts to reach out to young voters, who tend to be less likely to go to the polls than the rest of the population.

Macron cited his presidential duties, notably his diplomatic efforts over the Russian onslaught against Ukraine, to justify his absence during much of the campaign, which has been criticised by other candidates.

Turnout could be the deciding factor in the the election and could harm Le Pen’s chances most because her working class support base is composed of voters who tend to stay at home on election day.

In Perpignan, Le Pen sought to rally supporters including those mulling about casting their ballot for novice far-right candidate Eric Zemmour, a former TV pundit whose bid for the presidency is based entirely on the migration issue.

He stands in fourth place in the polls, behind far-left leader Jean-Luc Mélenchon.

Le Pen also appealed to supporters to cast their ballots.

“To those who stopped voting because of anger, disgust, disillusion, fatigue, I tell them: ‘I understand you’ but here, become citizen again,” Le Pen said.

READ MORE: The 2022 elections are a monument to France’s deteriorated democracy 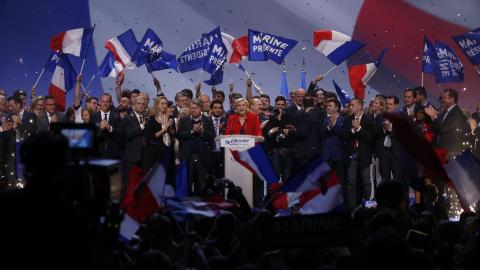