The similarities between the speeches drew online accusations of plagiarism, but aides of French far-right presidential candidate Marine Le Pen brushed off the criticism.

Although the speech caused an online sensation over plagiarism, it appeared to be an attempt by Le Pen to reach out to supporters of Francois Fillon. Fillon was knocked out in the April 23 first round of voting after coming in third with 20 percent of the vote.

Polls show Le Pen lagging behind centrist front runner Emmanuel Macron by about 20 points before next Sunday's runoff, and she needs to broaden her base to stand a chance of winning. Fillon has urged voters to back Macron.

In one part of her May 1 speech, lasting about 50 seconds, Le Pen talked about people learning French in Argentina and Poland, and on waiting lists to study at the Alliance Francaise official French schools abroad, in a word-per-word lifting of a mid-April speech by Fillon.

Le Pen added to Fillon's comment, saying this showed France is more than a military and industrial power, that France "must and can" become a big power again.

It was the second most trending topic on Twitter in France, with the hashtag #plagiat, plagiarism in French.

One Twitter user, @RidiculeTV, posted a video of both speeches.

The incident had echoes of an incident during last year's US presidential election when a writer for then-candidate Donald Trump's campaign apologised for a speech by Trump's wife Melania that drew accusations of plagiarism from a speech earlier given by former First Lady Michelle Obama.

The National Front (FN) candidate's team was unrepentant, however. Florian Philippot, an FN deputy leader, said the party "completely owned up" to the fact that the speech resembled one by Fillon.

In another excerpt about prospects of cooperation with France's neighbours, where the words were again the same as in Fillon's speech, Le Pen added that this would require France not being "a vassal" of Germany.

French newspapers and social media highlighted the similarities, but Le Pen aides brushed off the criticism.

Philippot told Radio Classique that Le Pen's speech was a "nod-and-a-wink" to Fillon's speech in order to "launch a real debate" about French identity.

Le Pen's campaign manager David Rachline also played down plagiarism accusations, painting her speech as a form of tribute to Fillon. The reference "was appreciated, including by all of Mr Fillon's supporters," Rachline told France 2 television. 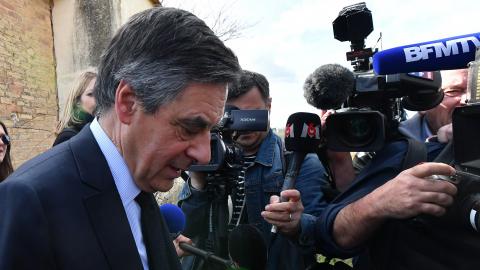