May tours Europe in bid to save Brexit deal

British Prime Minister Theresa May steps up efforts to sell her European Union divorce deal, as rebel lawmakers in her party say she has to go.

Embattled British Prime Minister Theresa May sought Angela Merkel's support on Tuesday to save her floundering Brexit deal but the European Union ruled out renegotiating the divorce treaty, after May postponed a parliamentary vote she admitted she would lose.

Less than four months until the United Kingdom is due to leave the EU on March 29, May warned British lawmakers that if they rejected her deal then the only other options were a disorderly no-deal divorce, or a reversal of Brexit that would defy the will of those who voted for it.

A day after pulling the vote in the face of hostility from lawmakers, May rushed from London for breakfast in The Hague with Dutch Prime Minister Mark Rutte and then a meeting in Berlin with Europe's most powerful leader, German Chancellor Merkel in a frantic bid to save her deal.

The message from the EU was clear: It will give "clarifications" but will not countenance reopening the treaty.

"The deal we achieved is the best possible. It's the only deal possible. There is no room whatsoever for renegotiation," European Commission head Jean-Claude Juncker said in an address to the European Parliament in Strasbourg.

In rainy Berlin, a hitch with May's car door briefly trapped her inside, delaying her red carpet handshake with Merkel.

The British parliament will vote on a deal before January 21, May's spokeswoman said. If there is no satisfactory deal by then, parliament will still be given a debate on the issue.

Vote of no confidence

May needs to be replaced, a leading Eurosceptic lawmaker in her Conservative party said on Tuesday as he urged colleagues to trigger a vote of no confidence in her leadership.

"What I would like to happen today is for Conservative members of parliament to realise that we simply cannot go staggering forward any longer like this and I'm afraid to put their letters of no confidence in," Steve Baker told BBC radio.

May on Monday postponed a parliamentary vote on her Brexit withdrawal deal after it became clear it would be defeated to seek more concessions from the European Union but Baker said her policy was doomed for failure.

"If we can't go forward with her deal ... then I'm afraid the only way to change the policy is to change the prime minister and I really think it' her duty to go," he said.

Merkel and May made no comment as they went into their meeting, and no statements or news conference were planned afterward.

Her next stop is due in Brussels later in the day to meet European Commission President Juncker.

Amid demands for a national election, ridicule and blunt warnings that her eleventh-hour bid for a changed deal was in vain, May pledged to seek EU support for changes to make it more palatable to lawmakers.

The EU said it was ready to discuss how to smooth ratification in Britain, but that neither the withdrawal agreement nor the contentious Irish backstop would be renegotiated.

Without a deal, the options for the world's fifth largest economy include a last-minute agreement, probably struck in 2019, another EU referendum or national election, or a potentially disorderly Brexit without a deal.

The ultimate outcome will shape Britain's $2.8 trillion economy, have far-reaching consequences for the unity of the United Kingdom and determine whether London can keep its place as one of the top two global financial centres.

EU President Donald Tusk, who was also to meet May in Brussels, has called a meeting of the other 27 EU leaders on Thursday to discuss the latest Brexit developments.

They and May were already due to attend a European Council summit on Thursday and Friday, which the British prime minister is expected to use to further press her case.

Irish Foreign Minister Simon Coveney said his government ruled out changes to the wording of the withdrawal agreement, but said there could be "a political declaration coming from a European Council".

"The Irish government doesn't have an issue with providing reassurance if that's helpful," he told national broadcaster RTE.

May faces strong opposition from her own Conservative MPs and parliamentary allies over a clause in the Brexit deal designed to keep open the border with Ireland.

Opposition Labour leader Jeremy Corbyn is facing calls to table a no-confidence vote in the prime minister, but is holding off for now as the party believes May is likely to win.

"The government has lost control of events and is in complete disarray," he warned on Monday.

Eurosceptic MPs in May's Conservative party also repeated calls for her to be replaced, with one warning it was time to "govern or quit". 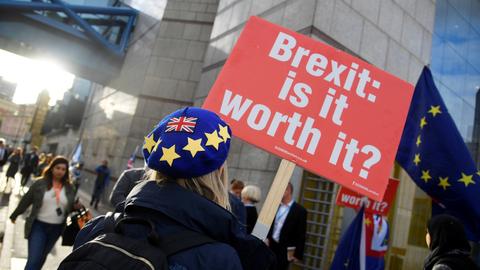