According to the latest results, the ruling Social Democrat party's favoured candidate Stevo Pendarovski got 42.85 percent of the votes while his right-wing rival Gordana Siljanovska Davkova 42.24 percent.

North Macedonia's pro-Western presidential candidate held a razor-thin majority over his rival after the first round of polls, election results showed on Monday, with low turnout spelling potential trouble for the run-off.

The third candidate, 59-year-old Belrim Reka from the ethnic Albanian minority, is now out of the running after winning around 11 percent of the votes.

The results illustrated the sharp split between pro-European and nationalist camps, as well as widespread apathy in a country where corruption and cronyism have eaten away at faith in politics.

Only 41.8 percent of the Balkan state's 1.8-million electorate cast ballots on Sunday, barely passing the 40-percent threshold that will also be required to make the final round of voting on May 5 valid.

Although the presidency is a largely ceremonial post, a failure to meet the turnout minimum would leave the divided country with an uncertain political future.

Options amid fear of crisis

Prime Minister Zoran Zaev has downplayed fears of a crisis but said there would be three options: holding a re-run, passing constitutional changes to remove the threshold, or giving parliament the power to appoint the president.

The presidential poll was the first since Zaev finalised a deal this year with Athens to add "North" to his country's name, ending a decades-long identity row between the neighbours.

The name-change enraged nationalists but cleared Skopje's path to join NATO and the EU – ambitions Greece had previously blocked over the name issue.

While both sides claimed victory after the voting, the local Independent newspaper said in an editorial that there was no clear winner, urging candidates to "start from zero" in their campaigns and "address real citizens' needs."

More than a fifth of the country is jobless while average wages are stuck at around $450 (400 euros) a month, leading huge numbers to emigrate abroad.

"I did not vote and I don't plan to (in the run-off)," said Trajce Deleski, a 45-year-old Skopje resident.

"They (politicians) blame ordinary people for low turnout but it is their fault, not ours. Parties need to change," he added.

On Sunday evening Zaev called on voters to back "progressive" Pendarovski, 56, instead of the opposition's Siljanovska, 62, who he described as "destructive."

"The world is tired of quasi nationalists and quasi patriots," he added.

"The battle is in still in front of us," she added. 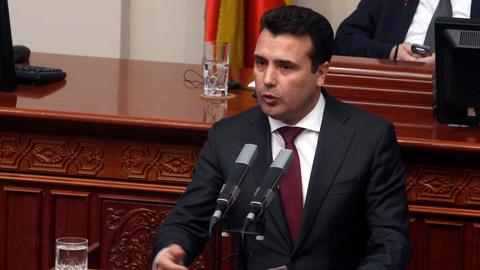