With thousands dying and thousands of hectares of forest land turning into ash, Europe struggles to break the stranglehold of climate change-induced heat waves and wildfires.

Europe is burning as heat waves send temperatures soaring, with firefighters facing an uphill struggle to put out wildfires – a direct result of a changing climate – engulfing most of the region.

France, Spain and Portugal among other European countries are seeing wildfires raging thousands of hectares of forest land as a result of extreme heat, forcing the evacuation of thousands of people to safer areas.

Arthur Wyns, policy manager at Climate and Health Alliance, says the world remains largely underprepared to deal with the health risks posed by disasters caused by climatic changes, even though they have become a “new normal”.

“There is a real public health risk in the next few days and weeks - and many people will face health complications and even die as a direct result of this climate-fueled extreme weather,” he says.

“Even though we have generally gotten better in responding to heat waves, the death toll from these events remains high. The most at-risk groups are the elderly, those with ongoing cardiovascular conditions, and those in cities.”

Wyns says temperature records are being broken across the Northern hemisphere, with wildfires and extreme heat devastating communities.

“The climate crisis has arrived,” he says.

France’s weather service is predicting new heat records for Monday (today). In the United Kingdom, too, some regions are bracing for 41C heat. Last week, Portugal saw temperatures shoot up to 47C, with Spain witnessing a high of 45C, causing over 1,000 deaths in the two countries alone.

Giovana Fleck, 25, is a resident of Amsterdam in the Netherlands. She says it’s new for her to witness such heat.

“It’s about 27C but the maximum today is supposed to go up to 32C. I can’t recall such a heatwave last year,” she says.

“This year, the heat was kind of spread out differently during the months. March, for example, was a very hot month and that’s very unusual. We didn’t have that last year,” she adds.

Fleck doesn’t have air-conditioning at her home, so to beat the heat, she and her loved ones go to cooler places, including the beaches, around the city. “Going to the park to sit under the shade, enjoying the wind is also helping a lot,” she says.

What Fleck shares from Amsterdam resonates with Marius Buet, a resident of Paris in France.

Buet, 27, who is currently in Marseille to see a friend, says, “Summers have been getting hotter every year of late and it was quite intense in Paris over the weekend.”

Like in Amsterdam, Buet says there is no culture of air-conditioning in France except perhaps for theaters and supermarkets.

“So, mostly we stay home for most of the day, closing the curtains while opening the windows in the evening to let some fresh air in,” he says, adding he feels good to be in Marseille, which is pleasant because of the air coming from the sea.

A changing climate is resulting in more heat, fires and disasters.

Fleck says it is a worrying development. “It worries me because it’s not something that we’re seeing that was natural to the country and certainly not natural to Amsterdam. It is definitely a consequence of the climate crisis and human action,” she says.

“What’s even more worrying is when I see the news and predictions of how many people are supposed to die from heat waves.”

Buet, too, shows his concerns but blames his country’s government for “not doing enough”.

“Our newly re-elected president (Emmanuel Macron) has done nothing for the climate in the last five years,” he says. “I try not to think too often that me and my friends are likely to face some serious stuff in the future.”

The signs of a climate catastrophe couldn’t be any clearer. But faced with an energy crisis in the wake of the conflict in Ukraine, Europe is hinting at a return to coal. With dwindling gas supplies, Austria, Germany, Italy and the Netherlands announced plans late June to revive their coal plants.

Such a move would hamper climate goals and pledges made by the developed countries, many of whom are already responsible for most of the world’s carbon emissions.

If the present heat and wildfires crisis is anything to go by, Fleck says the efforts should rather be diverted towards producing cleaner sources of energy for a better environment.

“I think what we can do as citizens is to put pressure on legislators to comply with climate goals and invest more in clean energy,” she says.

“We must also make sure that political parties and legislators who don’t historically believe in the climate agenda as a priority don’t use the Ukraine conflict as an excuse to evade actions on a cleaner policy.” 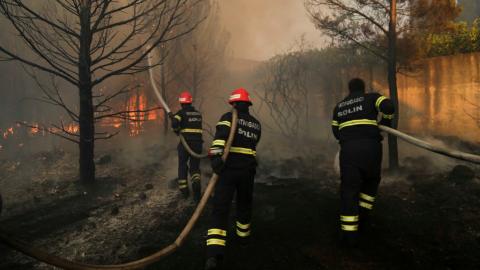