"The court is bound to conclude ... the decision to advise Her Majesty to prorogue parliament was unlawful," Supreme Court president Lady Hale ruled. Johnson disagreed with the ruling and renewed calls for new elections ahead of Brexit.

In a major blow to Prime Minister Boris Johnson, Britain's highest court ruled Tuesday that his decision to suspend Parliament for five weeks in the crucial countdown to the country's Brexit deadline was illegal.

The unanimous, strongly-worded Supreme Court judgment declared his order to suspend Parliament "void and of no effect."

The court found that Johnson acted to limit debate by lawmakers on Britain's impending departure from the European Union in violation of Parliament's constitutional role.

"The court is bound to conclude [...] that the decision to advise Her Majesty to prorogue parliament was unlawful," Supreme Court President Brenda Hale said at the ruling.

"Parliament has not been prorogued. This is the unanimous judgment of all 11 justices," Hale said.

"It is for parliament, and in particular the speaker and the lord speaker, to decide what to do next," she said.

Johnson said he disagreed with but would respect the ruling.

"I have to say that I strongly disagree with what the justices have found. I don't think that it's right but we will go ahead and of course parliament will come back," he told British broadcasters during a visit to New York.

Johnson on Tuesday renewed his call for the rival Labour Party to back new elections after the Supreme Court ruling.

"The obvious thing to do is call an election. Jeremy Corbyn is talking out the back of his neck," Johnson told reporters on a visit to New York, referring to the Labour leader.

Downing Street says Johnson will fly back from a UN General Assembly in New York overnight, earlier than planned.

That will bring him back to London by the time Parliament resumes on Wednesday at 10:30 GMT.

It's 5.45 am in New York and Parliament is still sitting, the UK Supreme Court has declared. An airplane at JFK needs to start up its engines, and speed the PM back to London. Meetings with Rouhani, and a speech to the UN General Assembly may have to be cancelled. Humiliation.

Parliament was suspended or prorogued from September 10 to October 14.

The prorogation was approved by Queen Elizabeth, Britain's politically neutral head of state, acting on the advice of the prime minister as she is required to do under the country's complex, uncodified constitution.

Johnson, who took office in July, insists the decision to suspend parliament earlier this month was a routine move allowing his new government to launch a fresh legislative programme.

But critics accused him of trying to silence MPs, most of whom oppose his threat to leave the European Union on October 31 without a divorce deal with Brussels.

The unanimous ruling was followed by calls from opposition leaders for Johnson to step down as he was "unfit to rule."

Scottish National Party lawmaker Joanna Cherry, one of the people who brought the legal case against the prime minister, said, "His position is untenable and he should have the guts for once to do the decent thing and resign."

Johnson's office has rejected calls for his resignation. 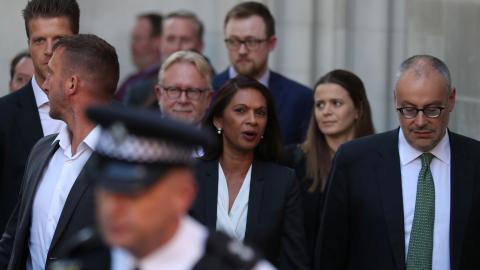