Russia had issued an Interpol red notice for Bill Browder, who was sentenced by a Moscow court for deliberate bankruptcy and tax evasion.

British businessman Bill Browder, a prominent Kremlin critic, was detained and then released by Spanish police on Wednesday, after a warrant from Russia for his arrest for tax evasion was found to be invalid, police said.

The head of investment fund Hermitage Capital Management, Browder led a campaign to expose corruption and punish Russian officials he blames for the 2009 death of Sergei Magnitsky, who he employed as a lawyer.

In the back of the Spanish police car going to the station on the Russian arrest warrant. They won’t tell me which station pic.twitter.com/Xwj27xC7Zd

A Russian court sentenced Browder to nine years in prison in absentia in December after finding him guilty of deliberate bankruptcy and tax evasion.

Browder said on his Twitter account that the Interpol General Secretary had advised Spanish police not to honour a Russian Interpol red notice – a request to locate and provisionally arrest someone pending extradition.

This is the arrest warrant pic.twitter.com/Cr1Sf4vS4a

Just to be clear, my arrest this morning in Madrid was the result of a SIXTH Russian arrest warrant using Interpol channels. It was NOT an expired warrant, but a live one. Interpol is incapable of stopping Russian abuse of their systems.

"This is the sixth time that Russia has abused Interpol in my case," he tweeted, following his release from a Madrid police station.

Browder remained in police custody for the "minimum necessary time" and was released because the warrant issued by Russian authorities was invalid, Spanish police said in a statement on Twitter.

The Kremlin did not immediately respond to a request for comment.

Ironically, the reason I’m in Madrid is to give evidence to senior Spanish anti Russian mafia prosecutor Jose Grinda about the huge amount of money from the Magnitsky case that flowed to Spain. Now that I’m released my mission carries on. Meeting with Prosector Grinda now

Browder is in Madrid to give evidence to Jose Grinda, a Spanish prosecutor who spearheads investigations into organised crime, about money from the Magnitsky case that has flowed to Spain, the British businessman said on Twitter.

Magnitsky was arrested in 2008 shortly after alleging that Russian officials were involved in large-scale tax fraud. His death nearly a year later while awaiting trial caused an international uproar.

Browder has accused Russian President Vladimir Putin of a personal vendetta over the businessman's efforts to get other countries to impose so-called Magnitsky sanctions against Russian individuals.

British Foreign Minister Boris Johnson said on Wednesday he had spoken to Browder and was glad he had been released.

"Moscow should concentrate on bringing those responsible for the murder of Magnitsky to justice," Johnson said in a tweet.

Just spoken to Bill Browder – very glad that he has now been released. Moscow should concentrate on bringing those responsible for the murder of #Magnitsky to justice 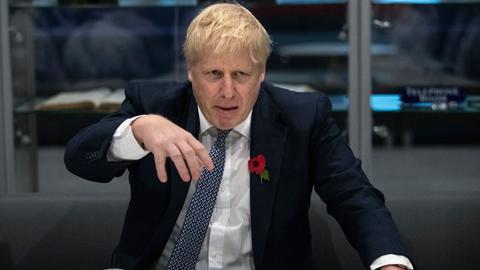