Riots in Belfast ahead of Northern Ireland's centenary anniversary

Northern Ireland came into being on May 3, 1921 as Ireland became independent from Britain and was split between pro-Ireland nationalists and pro-UK unionists, who hold the most power.

All sides know their roles in this well-versed piece of street theatre, which provides the backdrop to the 100 years of the divided British province.

Scenes of unrest returned last month to the streets of Northern Ireland, the former battleground of "The Troubles" where tempers are fraying over Brexit and other tectonic political shifts.

Over the past week, protesters from both pro-independence and pro-British groups have staged a #Belfast protest and clashed. Several police officers were injured in the clashes, and some public property, such as buses and private cars, was stolen and set on fire. #Irland pic.twitter.com/pW2Ykx8urs

At least 88 officers have been injured in clashes emanating from pro-UK loyalist enclaves, angry with a post-Brexit "protocol" they feel is casting them adrift from mainland Britain.

"All generations are angry and frustrated at what's going on," said David McNarry, of the Loyalist Communities Council (LCC).

"This damn protocol is a European invention (to) take away my Britishness," he told AFP in central Belfast, a heavy trace of emotion in his voice.

Violence has been focused at "interfaces" – where loyalist and pro-Ireland nationalist areas butt up against one another.

Towering "peace walls" separate the communities, crisscrossing the Belfast landscape, a reminder of the divisions that remain even after "The Troubles" ended in 1998.

The latest violence saw loyalist youths face off with police who were preventing their advance towards a gate in the barrier.

As forecast on @Underground_RT, Protestant protests against BREXIT border between England and Ulster resume in Northern Ireland today after a pause for the Duke of Edinburgh's funeral...#Lanark #ulster #belfast pic.twitter.com/zpi86WBCtG

In the early evening on April 19, teens covered their faces and scrambled for bricks and stones to throw.

A mother pushing a pram scooted her child out of the way as a small gang charged a police Land Rover, climbing on the bonnet, prying off a wing mirror and pulling at locked door handles.

Police on the frontline remained inside their vehicles - their windscreens and sirens covered in metal grid-work that parried the worst of the debris.

Early in the evening, a switch pressed by an unseen hand slammed shut the gates in the "peace walls", completely sealing the neighbourhoods off from each other.

A convoy of police vehicles pulled in from a side street, parking in practised formation to block the road to t he gates.

The ranks of riot police wielding batons and shields quelled the worst of the violence, for one night at least.

The unrest paled in comparison to clashes earlier in the month, when water cannon and dog units waged a running battle with gangs throwing petrol bombs and fireworks.

Loyalist and nationalist youths faced off in a night of violence that shocked the UK and left the area by the peace gates charred and pockmarked.

A teddy bear has since been hung on the gates with a hopeful handwritten dedication: "Peace for our children's future."

Against this backdrop, it is hard to imagine a "happy birthday" for Northern Ireland.

Unionists and nationalists fervently disagree about the legitimacy of the region, both contest its future, and both feel under siege.

On nationalist Bombay Street, a whole row of terraced houses built in the shadow of the peace wall have caged gardens.

Looking out of their back windows, residents see a slanting metal fence designed to stop rocks and bottles pelting their homes.

The British government has promised events around the anniversary on Monday will be sensitive to all traditions.

But when both sides live a bunkered existence, there is little prospect of a shared celebration.

"That will not happen here," said one resident on the nationalist side of the peace wall.

"(Their tradition) is the only one that matters, not ours," she said, gesturing towards her unionist counterparts who feel much the same. 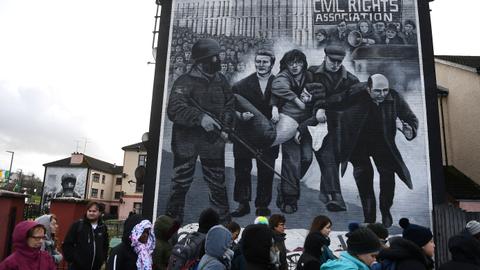 British ex-soldier to be charged in Bloody Sunday killings 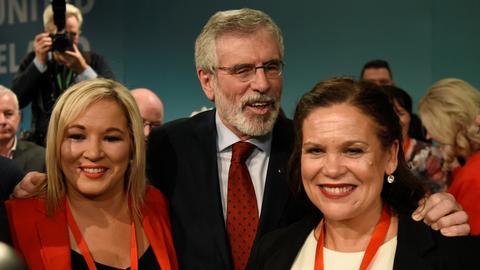