Thousands in Brussels march 'against hate and fear'

Thousands of people march 'against hate and fear' in Brussels in wake of terrorist attack in Belgium capital, which killed 32 people

Thousands of people from all-faiths gathered for a "march against hate and fear" in Belgian's capital, Brussels on Sunday to commemorate victims of several attacks in the city.

Meeting in the town's northern station before marching across the city centre to the Bourse, 6,500 people took part in the rally, which was initially postponed from March 27, due to security concerns. No incidents were reported.

Almost a month ago, two coordinated attacks in Brussels' main airport and a metro station were claimed by DAESH terrorist organisation, killing 32 and injuring more than 300 people.

Shouting slogans, such as, "DAESH go away," "Brussels is not yours" and "All against terror and hatred," marchers called for unity and peace to stay strong against terrorism.

One of the organisers for the march, Wouter Hillaert, said that the event was aimed at promoting peace and respect for different beliefs, not aimed to ignite hate in each other.

"We want a Belgium of unity. I think that's the only good answer we can have on the terror. It's not against each other, but together we will fight terrorism." he said.

Following the march, organisers, bombing victims and their relatives met with Belgian Prime Minister, Charles Michel, at his official residence. 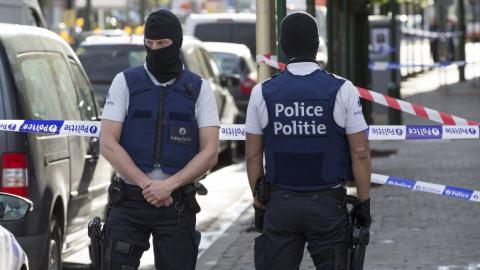