Why did thousands of Russians take to the streets?

1
Ukraine asks allies not to cause 'panic' over Russian conflict
2
US to bolster Europe's eastern flank amid Ukraine-Russia tensions
3
US, EU pledge cooperation on energy security amid Russia threat
4
Italian leaders agree to speed up presidential vote as stalemate continues
5
Will the West target Nord Stream 2 to cut German dependence on Russian gas?

Alexei Navalny, a strong critic of Putin and Medvedev, called Russians to the streets to protest alleged government corruption. Around 1,700 of them ended up being detained.

Who is Alexei Navalny?

Navalny is a prominent critic of Russian President Vladimir Putin and the government.

He plans to stand against Putin in the presidential elections of March 2018.

On Tuesday, a Russian court sentenced him to 30 days in prison on charges of repeatedly violating the law for organising illegal protests.

What were the protests about?

Russians took to the streets on Monday in the thousands to protest alleged corruption in the federal government.

The beginning of the wave of protests coincided with a public holiday, Russia Day, when Putin handed out awards and held a reception in the Kremlin.

How many people attended?

The Interior Ministry said the turnout at the Moscow protest was about 4,500. This number is significantly fewer than those estimated by Reuters reporters, who put the turnout in the low tens of thousands.

How was Navalny able to get a new generation onto the streets?

Navalny has brought youngsters — those who were born or grew up during Putin's 17 years of rule, to the streets through his embrace of social media.

The self-described nationalist democrat came to prominence through his blog, which he uses as a primary method of communicating with the public.

His Anti-Corruption Foundation posted a video on YouTube on March 2. In it, Navalny accuses Prime Minister Dmitry Medvedev of building "a corruption empire" of luxury properties, and controlling vast personal wealth through a shadowy network of foundations.

Medvedev denied the allegations, but the video has garnered almost 23 million online views to date.

A 19-year-old protester Yevgeny told AFP that they want a turnover among those in power.

"Pressure on young people has increased," he said.

Why did Russian police interfere the protests?

Navalny was earlier granted permission to hold a rally at Sakharova Avenue. But police said he later changed the location to Tverskaya Street without permission on the eve of the protests.

Tverskaya Street is located near the Kremlin.

On the other hand, Navalny said that they needed to change the location because Russian authorities had blocked their efforts to set up a stage and sound equipment.

Over 1,700 people were detained mainly in the capital Moscow and Russia's second city Saint Petersburg, while Navalny himself was picked up by police as he headed to the Moscow event.

How did the world react?

The Kremlin said police had acted correctly and slammed the "dangerous" actions of protesters.

The US condemned the arrests, a rare criticism of human rights violations and the Kremlin from Donald Trump's administration.

White House spokesman Sean Spicer called "on the government of Russia to immediately release all peaceful protesters," who had been detained in nationwide marches.

European Parliament President Antonio Tajani voiced his concern after Navalny's arrest and an EU spokesperson deplored "the detention of hundreds of peaceful protesters and the violence used by Russian authorities against them."

What are Navalny's chances of winning the elections?

The outcome of the election is still unpredictable as yet; Navalny was convicted for embezzlement, for which he received a five-year suspended sentence.

Under Russia's law, convicted people are not allowed to run for office. Navalny says the charges against him are politically motivated.

In all cases, the scale of Monday's protests suggests Navalny has maintained his campaign's momentum despite more than 1,000 people being arrested after the last such protest in March.

That is likely to embolden him to call for more protests and keep Putin, who is expected to run for re-election next year, on his toes. 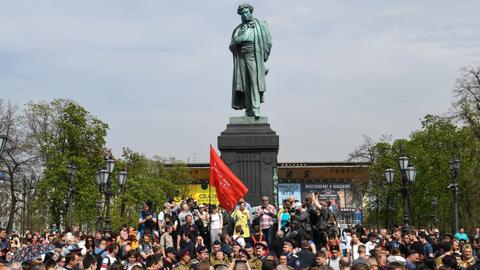 1
Ukraine asks allies not to cause 'panic' over Russian conflict
2
US to bolster Europe's eastern flank amid Ukraine-Russia tensions
3
US, EU pledge cooperation on energy security amid Russia threat
4
Italian leaders agree to speed up presidential vote as stalemate continues
5
Will the West target Nord Stream 2 to cut German dependence on Russian gas?