Zerzevan Fortress, a Roman military settlement in Diyarbakir, Turkey, is home to a castle, houses, and a newly excavated US button with the legendary eagle and the inscription ‘E Pluribus Unum’ on it.

The Zerzevan Fortress in Turkey’s southeastern Diyarbakir province was used as a military settlement during the Roman Empire, going back 3,000 years. Recent excavations unearthed a badge that created excitement: it bore a motif used in the United States, the Great Seal with the words ‘E Pluribus Unum’ (Out of many, one).

Excavation work, launched with the collaboration of the Ministry of Culture and Tourism, Dicle University, Turkish History Association and several other regional institutions, continues to this date.

The Zerzevan Castle was submitted by Turkey to be a UNESCO World Heritage Site, and is currently on the tentative list. “The Persian originated Mithra cult was first brought to the Roman empire by Roman soldiers after the expeditions to the east and became quite widespread in the Roman Empire at 2-3rd centuries AD,” the UNESCO website informs.

“Although the cult of Mithras is found in all the regions dominated by Rome, Mithraeum in Zerzevan Castle is the only temple on the eastern border of Rome and dates back 2-3rd century AD.  Therefore, it should be one of the oldest temples of this mysterious faith.”

Aytac Coskun, head of the excavation team and a faculty member at Dicle University, tells Anadolu Agency that the team found the US badge during the dig.

The motif on the surface of the badge, removed from a depth of 125 centimeters on the eastern walls of the Zerzevan Fortress during the ongoing excavations, was first designed in 1782, Coskun points out.

"Early examples of this type of badge or buttons were used in the US in the 1850s. Since 1902, this badge-like coat of arms has also been used by the US army. Similar examples were also used in World War I and belong to the general service unit," he explains.

He adds that the Latin inscription "E Pluribus Unum" was placed on the badge.

"This is the first official slogan of the US. This slogan, which is Latin (the official language of the Roman Empire), means 'from multiplicity to unity.' This slogan was used to mean the union of the 13 colonies that make up the US.

On the right paw of the eagle is an olive branch, on the left is a tightly drawn bundle consisting of 13 octaves. It is known that these symbols represent the 'power of peace and war',” he says.

“A scroll inscribed 'E Pluribus Unum,' the motto of the first committee, is seen on the eagle's beak. The shield, located on the chest of the eagle and representing the states, indicates the unity of the federal government. A bright constellation of 13 stars was used above the eagle's head."

"The unveiling of this badge of copper-zinc alloy at the Zerzevan Fortress is quite interesting and attractive," Coskun continues, adding that there have been no such findings in an archaeological excavation in Turkey or abroad according to their research.

"Similar examples are found only in the US and the UK. Detailed analyses … were performed on the badge. It turned out that post-15th-century technology was used.

“Also, the analysis showed that the badge remained under the ground for about 250-300 years, since the 18th century,” he says.

“Early examples of this type of badge or buttons were used in the US in the 1850s. Since 1902, this badge-like coat of arms has also been used by the US army,” he notes, mentioning how surprising it is to find such an item that probably belongs to the period of the US’ foundation. 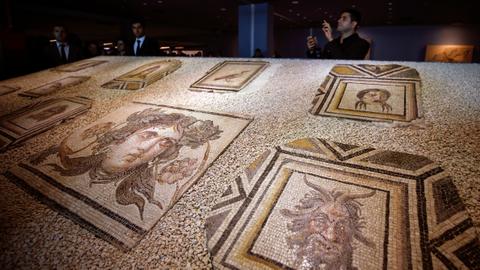