There have been numerous reports of discrimination against young Muslim students in Germany’s public school systems with no signs of any improvement, an official of the German Institute for Human Rights says.

There has been no improvement in the situation of Muslim students grappling with ongoing discrimination in German schools, said a leading human rights official.

“We see a need for action in this area and I have not noticed that the situation has improved," said Dr. Beate Rudolf, director of the German Institute for Human Rights, at a press conference in Berlin on Wednesday.

Rudolf acknowledged though that this issue was not addressed at all in this year's annual report on the developments in the human rights situation in Germany which was submitted to the nation’s parliament (Bundestag).

Within Germany’s public school systems, there have been numerous reports of discrimination against young Muslim students, specifically girls, leading to a climate of low expectations and discouragement.

There have also been frequent complaints by Germany’s Muslim community that teachers were less likely to recommend Muslim pupils for schools which would pave the way for a university rather than a regular vocational career.

'Negative attitudes toward Islam are widespread'

Discrimination against Muslims is widespread in Germany, according to research published in October by the Expert Council on Integration and Migration (SVR).

Nearly 48 percent of respondents said they believe "Islam is not compatible with German society,” while 29 percent suggested restricting the practice of Islam in the country.

"Negative attitudes toward Islam are widespread in all groups examined -- people with and without a migration background,” the researchers said in their report.

Nearly 44 percent of Germans surveyed said that Muslim organizations should be monitored by the state’s security agencies, while only 16 percent opposed such a move.

Anti-Islamic attitudes were slightly more common among migrants who arrived in Germany from non-Muslim countries.

People who had social contact with Muslims, however, were less inclined to hold anti-Islamic attitudes, according to the report.

At least 662 hate crimes against Muslims

A country of over 84 million people, Germany has the second-largest Muslim population in Western Europe after France.

It is home to nearly five million Muslims, according to official figures.

The country has witnessed growing racism and anti-Muslim sentiments in recent years, fueled by the propaganda of far-right groups and parties, which have exploited the refugee crisis and attempted to stoke fear of immigrants.

More than 46 mosques were attacked between January and December last year, and at least 17 people suffered injuries as a result of anti-Muslim violence. 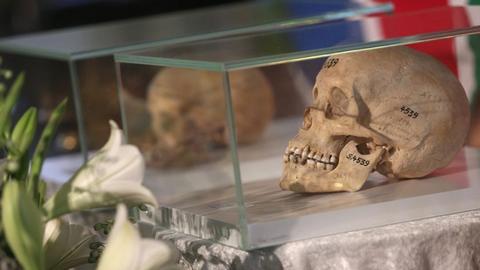