Gulsin Onay wears many hats: she is a state artist and a UNICEF Goodwill Ambassador, a Bilkent University Artist in Residence and has also been Bodrum’s Gumusluk Festival’s artistic consultant since its inception in 2004.

Gulsin Onay is a pianist with more than 20 albums to her name. Her latest, simply titled Ludwig van Beethoven, and recorded at the beginning of the year, was released in August 2020. It celebrates the 250th anniversary of the birth of the famed German composer.  It features works from three periods of his life. The three piano sonatas are Piano Sonata No.8 in C minor Op. 13 “Pathetique”, Piano Sonata No. 21 in C major Op. 53 “Waldstein” and Piano Sonata No. 32 in C minor Op. 111. There is also the F major WoO 57 Andante favori, which Beethoven often played in his concerts; he had originally composed it as the second movement of the Waldstein sonata but then changed it in favour of a shorter movement.

Making the best of a bad situation

“At the beginning of the year, I was looking at a very heavy concert schedule,” Onay says. Then came the pandemic. “For the past six months, we have all been talking about scheduling them for next year without any clear dates. I have so many concerts next year that I will have to play day and night to catch up!” she laughs.

“All joking aside, the concerts that are most difficult to schedule are those that feature orchestras, so we need to find works suitable for a smaller ensemble. For example, Mozart’s Concerto No. 12 requires only 12 to 14 players. There are arrangements of the Chopin piano concertos for quartets,” she says. “We will have to be seated apart on stage and the audience will have to be socially distanced, sitting in separate rows.”

“I embraced social media during the pandemic,” Onay says. “The first concert I performed on social media had 930,000 viewers. It gave me a great sense of camaraderie, a sense of union and a morale boost to be able to meet with listeners this way,” she adds. “I couldn’t hear the applause, but I could feel their presence.”

Onay’s husband Tony, who was able to join her in Ankara a day before Turkey shut down its air space as a protective measure against the coronavirus, helped her with a more elaborate setup which means she has been able to simultaneously broadcast on Facebook, Twitter, Instagram and YouTube.

“I play a wide repertoire,” Onay says. “Not on Sundays only, but I play almost every day, marking composers’ birthdays, death anniversaries, or for example playing the ‘Moonlight Sonata’ when there is a full moon,” she adds.

While “nothing compares to concert halls” in terms of acoustics and connection with a live audience, Onay says she still prepares for each transmission as if it were a physical concert.

Gumusluk is a seaside village and fishing port in Bodrum, Mugla Province, southwestern Turkey. This year it will play host to the 21st International Gumusluk Music Festival, which will take place over four weeks from August 17 to September 17.

Gulsin Onay is the artistic consultant of the event, and is excited about the musicians who have agreed to travel to Bodrum especially for it. She highlights the opening concert with Roseanne Philippens (violin) and Michail Lifits (piano) from the Netherlands.

There is also the commemorative concert being held for Benyamin Sonmez, a talented cellist who died 10 years ago at the age of 29. Her violinist son, Erkin Onay, will join her alongside cellist Cag Ercag. She also draws attention to the concert and masterclass by Jean-Marc Luisada.

This is also the first year that film screenings will play a part in the festival.

Why Beethoven is miles apart

“I was supposed to play Beethoven in many locations this year,” Onay says, “sonatas, and concertos too.”

The concerts either had to be postponed or cancelled. Onay still hopes to give her last concert of the year in December. “There will be different sonatas and we will record and put out another album,” she enthuses.

“I play Beethoven while feeling him deep in my bones, with a deep love in my heart. He gives voice to different characters and their extremes so well!” she adds.

“He can be utterly kind, then all of a sudden, follow it up with a grand explosion and a feeling of rebellion. He has sudden changes. I have been admiring him since I was a child, I am in awe of these opposite characteristics.”

“Before I was sent to Paris at the age of 12 by the state as a child prodigy, I had the opportunity to work for two years with Ahmet Adnan Saygun, as well as Mithat Fenmen,” she says. The programme was intense, and Onay was so well-prepared for Paris that she completed a five-year programme in one year when there.

“Ahmet Adnan Saygun has a very significant place in my life,” Onay reminisces. “And he has had an effect not just on my life, but on many others who have become big players in the music scene.”

The musician has been playing the works of Saygun and his pupils on her radio show on TRT3 every Tuesday at 3pm, following it up with interviews with his pupils on her social media channels every Wednesday at 9pm. 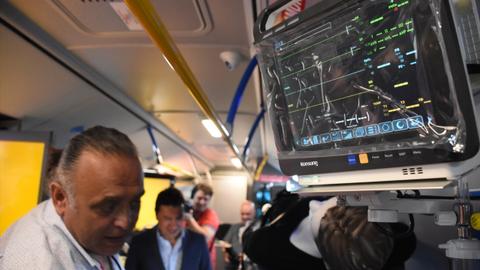