Akdamar Church, built in the 10th century AD in what is now Van province in Türkiye hosted guests from Türkiye, Armenia and beyond for its 10th special mass since reopening in 2010.

A church that was built centuries ago in Türkiye's eastern Van province celebrated its 10th special mass on September 4, 2022 since reopening in 2010 after a 95-year break.

Sahak Mashalian, the head of the Armenian Patriarchate in Türkiye, and Father Harutyun Damatian came to the island along with his clergy to conduct the ceremony in the Akdamar Church.

The mass was led by Damatian and attended by 46 clergymen from the patriarchate and some visitors from Istanbul, Armenia, and other parts of the world.

Speaking at the mass, Mashalian expressed gratitude to the authorities who granted permission to hold the ceremony.

He also made remarks on the ongoing dialogue between Türkiye and Armenia.

Stressing that Turkish and Armenian nations share a thousand years of co-existence, Mashalian said that the two nations can develop promising and brighter relations.

“Today, we prayed for the two friendly peoples to live in peace so that the Caucasus would turn into a land of peace. May God protects our county and humanity,” Mashalian said.

Akdamar Church, a medieval Armenian place of worship, was built between 915-921 AD by architect Bishop Manuel under the direction of King Gagik I Artsruni.

The church, which has a special place in East-West Christian art, carries the most important adornments and the most comprehensive wall reliefs of its time and was accepted on the UNESCO Tentative List of World Heritage on April 13, 2015.

On Sept. 19, 2010, the Akdamar Church hosted its first service after a 95-year break. The church opened its service every year for one day and the last service was conducted in 2021, which saw a gathering of thousands of local and international tourists in Van. 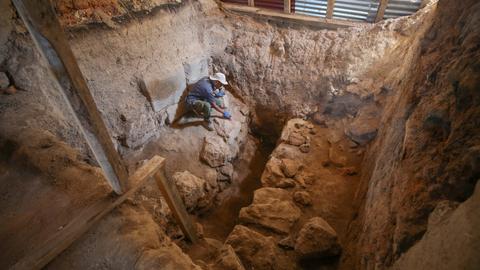