Thousands march through Madrid, Barcelona, Paris, London, and more rally in Guatemala and Honduras to mark International Day for the Elimination of Violence Against Women.

Thousands of protesters have hit the streets of Europe and Latin America to demand an end to violence against women.

The rallies took place on Thursday to mark the International Day for the Elimination of Violence Against Women, with thousands marching through Madrid and Barcelona, while others gathered in Paris and London and more rallied in Guatemala and Honduras.

Protesters were also expected in Chile, Mexico, and Venezuela.

In Spain, where the government has made the fight against domestic violence a national priority, thousands hit the streets of Madrid and Barcelona in a sea of purple flags, while others rallied in Valencia, Seville, and other cities around the country.

Demonstrations were also held in Turkey where President Recep Tayyip Erdogan stressed that violence against women is a global problem and "belief and effort" are needed to eliminate it.

"We have always sided with women, [and] will continue to do so," he said.

READ MORE: One in two women report ‘instances of violence’ during pandemic

"On a global level, it remains a scourge and a huge problem," Leslie Hoguin, a 30-year-old student and actor told AFP news agency in Madrid.

"It's high time that patriarchal violence against our bodies, our lives and our decisions came to an end."

"We are sick of the ongoing violence against us which takes many different forms," said Maria Moran, a 50-year-old civil servant.

"We want to see prostitution abolished and an end to the murders, the abuse, and the rapes."

Nearly one in three women worldwide has experienced physical or sexual violence, mostly by someone they know, according to UN Women, the United Nations' organisation for gender equality.

Pope Francis also weighed in by tweeting "Women victims of violence must be protected by society." 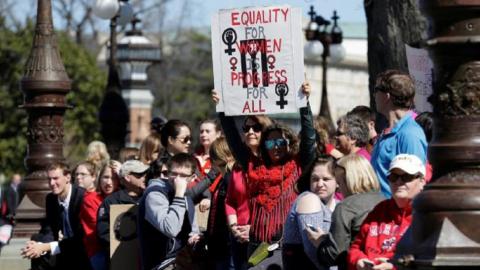