Soldiers, students and the Ottoman palace: A brief history of Turkish art

It’s a great time to be in Istanbul, with not one but two exhibitions featuring masterful paintings from the mid-19th century to the early 20th century, showcasing the best of the period.

The Reformation Period (Tanzimat Devri) in the Ottoman Empire was a time of reforms that can be traced back to Sultan Mahmud II. There had been attempts to reform the Ottoman state before the Reformation Period: “The janissary establishment was abolished, and Nizam-i Cedid army (the New Order army) was established [by Selim III in 1789] after the French model,” Nazan Olcer, the director of the Sakip Sabanci Museum in Istanbul, says.

Sultan Mahmud II’s reforms would be continued by his son Sultan Abdulmejid I, culminating in an Imperial Edict in 1839 (Tanzimat Fermani). The Reform Edict (Islahat Fermani) that followed was established in 1856 and promised equality to Ottomans of all ethnicities and origins.

According to the exhibition notes at Sakip Sabanci Museum’s From Reformation to Republic: Master Artists, Artist Students exhibition, “The period between the proclamation of the Imperial Edict in 1839 and the First Constitution of 1876 witnessed a series of reforms designed to regulate the political, social, and economic structure of the Ottoman Empire in a Western sense.”

An accomplished calligrapher, Sultan Abdulmeijd, in addition to political and educational changes, also supported “the development of an innovative cultural scene” during the Tanzimat period. For example, he commissioned a Western style portrait of himself by the artist Ferik İbrahim Pasha (1815-1891).

Abdulmejid’s younger brother and successor Sultan Abdulaziz (r. 1861-1876) was “interested both in calligraphy and painting, and he was a keen patron of the arts.” The SSM texts note that during his reign, “advised by his aide, the painter Seker Ahmed Pasha, he established a lavish collection of paintings at Dolmabahce Palace. Another innovation that took place under Sultan Abdulaziz’s regime was the Sergi-i Umumi-i Osmani (the Ottoman Exposition), an international fair held in Sultanahmet Square in 1863.”

Abdulaziz was also the first Ottoman Sultan to visit Europe for non-military purposes, when he went to see the 1867 Paris Universal Exhibition. During Abdulaziz’s reign, many European painters worked in the Ottoman palace in Istanbul, such as Ivan Konstantinovich Aivazovsky, Amadeo Preziosi (1816-1882), and Stanislaus von Chlebowski (1835-1884).

French national Pierre-Desire Guillemet “opened the first art academy in the district of Pera [Beyoglu] in 1874.” European painters in the Ottoman Empire were commissioned to paint portraits of sultans, or previous battle glories. Olcer says “Sultan Abdulaziz took art lessons from Chlebowski, that much we know.”

Sultan Abdulaziz, when he commissioned an equestrian statue of himself in bronze, also started a new era, breaking “the previously held prejudice against figurative sculpture.”

Of course, one must not forget their forefather, Mehmet the Conqueror, who commissioned the first Western-style portrait to Italian painter Gentile Bellini, in 1480. Yet painting was still not popular in the empire, as Mehmet II’s son Beyazit II disposed of his father’s portrait that over decades ended up at the hands of the National Gallery in London, Oguz Erten writes in his book Turk Plastik Sanatinda Ilkler (Firsts in Turkish Plastic Arts).

During the Tanzimat period, painting went through major changes, “which saw the baroque, rococo, empire, and neoclassical styles on the rise in European architecture, and genres such as theater, story, the novel, and concepts such as the motherland, nationality, and equality come to the fore for the first time due to engagement with Western literature,” SSM texts say.

The increased interest in painting meant a reduced interest in miniatures, and artworks tended to reflect portraits, landscapes and still lifes. Ottoman painters such as Osman Hamdi Bey and Halil Pasha, “went to Paris and attended lectures in the Ecole des Beaux-Arts studios, [and] became interested in figures, and in portraits by extension.”

Olcer says that miniatures were always a part of Ottoman arts, but as meticulously, beautifully and artfully they were produced, they were confined to the gilded pages of books and were seen by a select few. “When you say painting, it’s time to hang something on the walls. There is a transitional trend called ‘levha’ that spells out good will wishes in Ottoman script large enough to hang on the walls. The time to enjoy miniatures in books is slowly receding as wall hangings take precedence in the 19th century.”

During that era, paintings on canvas had primarily focused on imperial portraiture, until these Western-influenced artists, the SSM exhibition texts say, “increasingly turned to subjects in their immediate surroundings. These works often featured women, thus hinting at a new era of female visibility in Ottoman society after 1839.”

The focus on the representation of the body did not mean that landscapes and still lifes were out of the picture: “Soldier painters of the same or next generation, such as Suleyman Seyyid and Seker Ahmed Pasa, placed more emphasis on painting in a technically realistic manner.” Olcer says the science of topography made artists out of soldiers.

The significance of soldier artists is echoed by Directorate of National Palaces Painting Museum director Gulsen Sevinc Kaya. She says because there were “no painting museums or art schools yet in the Ottoman Empire,” soldiers who had a talent for art were sent to Europe to study under renowned painters.

Speaking of soldier painters, it must be noted that the first Western-style art lessons under Ottoman rule “began in military schools, where painting and drawing classes were introduced as part of training in cartography and were later added to the curricula of civilian schools as well,” Olcer says.

Olcer also points out that while math and physics classes were part of the curriculum, drawing and painting were also obligatory, in order to do reconnaissance about battle areas, to know the topography of the surroundings, to be able to ascertain where to place the cannons.

According to Kaya, the Ottoman court also had masters of Armenian origin, the Manas family, who specialised in ivory and oil portraits of sultans, as well as court painters such as Chlebowski and Zonaro, and foreign painters who presented paintings to the palace.

Kaya says the first painting collection in the Western sense during the Ottoman period was established in Dolmabahce Palace. She adds that the collection at the Painting Museum represents a selection as well as the process of how paintings were selected and whose tastes they reflect. She adds that “the Ottoman palace is integral in the efforts to promulgate art, the biggest supporter of Turkish painting.”

During the reign of Sultan Abdulaziz (1861-1876) young graduates, mostly from military schools, were sent to Europe to study art. Seker Ahmed Pasha and Suleyman Seyyid, as well as Halil Pasha, who also received support from his family, are among these artists. According to Olcer the soldier painters are a very significant group in the origin of Turkish painting.

Osman Hamdi Bey is an exception in that he was sent by his father to Paris to study law; yet once in France, he attended painting studios and trained as a painter. Upon his return, he founded the Academy of Fine Arts (Sanayi-i Nefise Mektebi) in 1883. According to Olcer, “classes such as painting, sculpture, live drawing and more were taught by foreigners, who would eventually be replaced by Turks returning from Paris.”

According to the Sakip Sabanci Museum texts, “In this early phase of Turkish painting, Ruhi Arel, Ibrahim Callı, and Hikmet Onat were among those who took the European scholarship examinations and studied art abroad. From the same generation, Nazmi Ziya, Huseyin Avni Lifij, Feyhaman Duran, and Namık Ismail went to Europe with the support of their families or private scholarships.” The so-called 1914 generation returned to Istanbul when WWI broke out.

Yet, Olcer says, one must not forget that in the palace there were already painters of non-Muslim origin. She mentions Raphael, who portrayed young princes as children, or another painter who depicted a hammam scene. Beyond the immediate circle of the palace, Olcer also mentions non-Muslim painters who were travellers, who worked for the embassies, or were part of political committees who had come to mend relations or sign treaties. “These lands are no stranger to painters, illustrators,” she says.

Samples of primarily Ottoman and Turkish artists’ works, as well as European-origin court painters’ art can be viewed at the Sakip Sabanci Museum’s From Reformation to Republic: Master Artists, Artist Students exhibition, which ends with paintings from Mustakiller (The Independents) who have brought new trends from Europe to Turkey and rebelled against the existing system.

The exhibition is open to the public from Tuesdays to Sundays from 10 am to 6pm. For a more comprehensive picture, TRT World also recommends visiting the National Palaces Painting Museum in Besiktas, likewise open every day except Monday. 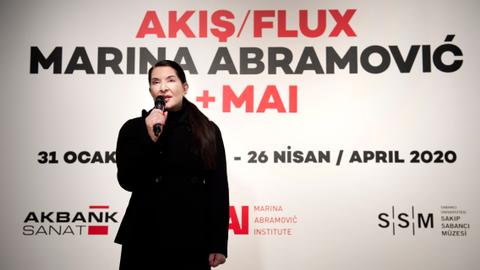 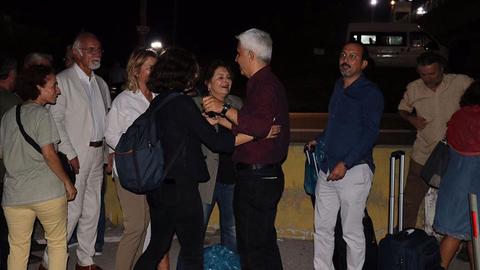