The director of a Turkish cultural institute in Johannesburg heralds the start of traditional Turkish archery classes, to be taught by two South African nationals who studied the craft in Türkiye.

Traditional Turkish archery is spreading its roots: a Turkish cultural centre in South Africa recently announced that it would start giving lessons in the sport, recognised by UNESCO as part of humanity's Intangible Cultural Heritage in 2019.

"We sent two South African nationals to Türkiye in April this year to study archery and they have now returned. They will teach the sport at our institute," Abdulaziz Yigit, director of the Yunus Emre Institute in South Africa, told Anadolu Agency.

The classes are scheduled to start in September, Yigit said, adding that traditional Turkish archery -- practiced both on foot and horseback -- had been shaped into a sport over the centuries with its various principles, rules, rituals, and social practices.

According to Yigit, the Yunus Emre Institute is also planning to open a Turkish cuisine school in South Africa's largest city of Johannesburg to cater to the ever-growing number of people seeking Turkish dishes in Africa's most advanced economy.

"During our Turkish Cuisine Week held in Johannesburg and Pretoria in May this year, people showed great interest in learning how Turkish cuisine is prepared," Yigit said.

The Turkish Embassy in the capital Pretoria offered free breakfasts and meals to South Africans to taste Turkish traditional dishes as part of Turkish Cuisine Week.

Türkiye has been promoting its cuisine in a series of events held across the country and all its missions abroad during Turkish Cuisine Week, held for the first time this year on May 21-27.

The events were organized under the auspices of the Turkish Presidency and with the support of the Ministry of Culture and Tourism.

"We hope once this school is open, it will train many Turkish chefs to cater to the ever-growing market of Turkish cuisine," Yigit said.

Since its establishment in South Africa in 2017, the Yunus Emre Institute has taught about 300 students Turkish language and art.

"Many people have attended our Turkish language courses for various purposes. Some want to learn the language for business communication, and some want to join higher education institutions in Türkiye, among other reasons," Yigit said.

The institute, which also promotes cultural relations by coordinating with local South African cultural institutions, previously taught only Ottoman Turkish calligraphy as an art form but it has now expanded with several other art courses.

These include ebru (marbling), ceramic tiling and traditional Turkish handicrafts among others.

Yigit said they suspended face-to-face courses during the coronavirus pandemic and would restart interactive classes this month.

Yigit added that the institute has been vigorously advertising the start of face-to-face studies.

"Many people have already responded by registering for the courses," he said. 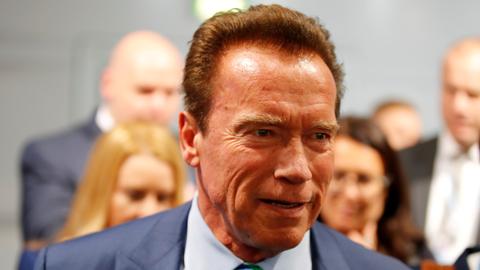 Schwarzenegger kicked in the back at global sports event