Where do old cellphones go? To this collection in Turkey if they’re lucky

A phone repairman who works in Van has amassed a collection of 1,000 cell phones over twenty years.

Sahabettin Ozcelik, a phone repairman living in Van province in Turkey’s east, has been collecting cell phones for twenty years. He now has 1,000 cell phones in his possession.

Ozcelik migrated to Van from Hakkari’s Yuksekova district four years ago with his family. He has a shop in the city centre where he fixes cellular phones.

Over the years as he practiced his craft, Ozcelik has decided to keep old cell phone models that he came across in his line of work and start his own collection.

In the twenty years he has been collecting cell phones, he has had a break in, with burglars getting away with 700 of his approximately 1,700 phones. Ozcelik displays the remaining cell phones in a separate room in his house, taking excellent care of the samples that used to be used by the thousands in their heyday.

Ozcelik told AA that he picked his profession of phone repair twenty years ago because of his interest in cell phones, and that he has been collecting ageing models ever since. Saying that the old models are constantly discontinued as new models hit the market, he added “Thinking people will eventually no longer be able to find these models, I decided to start a collection.”

There are phones that I buy and fix, I keep them in my house. All of the phones are in working condition, with their batteries intact. I used to have 1,700 phones. Two years ago, burglars broke into my house and stole 700 pieces that I cared deeply about.”

Ozcelik now has 1,000 phones remaining in his collection. “All of the phones are very rare and valuable. I’ve had various offers before, but I didn’t hand over my collection. I designated a room in my house for the phones. Sometimes I have a hard time keeping up with their maintenance. God willing another collector will look after them when I’m gone and carry them to the generations after,” he said. 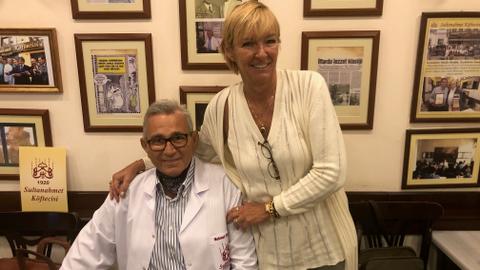