1
Capacity in Turkish sports stadiums to pass one million in 2021
2
Israel's autonomous 'robo-snipers' and suicide drones raise ethical dilemma
3
Endemic dune crickets unique to Turkey are ‘under threat from humans’
4
Lebanese politicians scurry to get Covid-19 vaccine ahead of citizens
5
A decade after the Arab spring, activism endures in the face of repression

Several gun repair and manufacturing shops have sprung up in Azaz city, and one particular weapon is in demand—the AK-47, locally referred to as the "Bin Laden".

He is a stocky man of medium height. His piercing blue eyes occasionally exude a sparkle of brilliance from behind the visor of a ball cap meant to hide his face. He uses an alias, calling himself ‘’Abu Ahmad.’’ And he says he is a hunted man.

“I do not want to reveal my face for security reasons, to protect myself from Syrian regime intelligence, Iranian intelligence, and all other intelligence agencies of the world,” said Abu Ahmed.

Abu Ahmed, the man with so many enemies, is one of the most prolific gunsmiths in opposition-held Azaz, a tiny city in northwestern Syria. He met us at one of the dozens of gun repair shops that have sprung up there.

“This workshop was started because of the atrocities committed by Bashar al Assad. We created it to defend ourselves against Bashar and his forces,” said Abu Ahmed.

Prior to repairing war machines, Abu Ahmed said he used to work at a textile factory near Aleppo, operating machinery and making moulds. As the country slipped into civil war, battering its economy, the factory shut down.

It is difficult to say how many weapons are currently being used inside Syria. But estimates run in the tens of millions, a majority since the conflict began seven years ago.

“There are an estimated 100,000 registered weapons in the hands of the opposition Free Syrian Army in northern Syria,’’ said Hisham Dalbarra, the military police chief of the opposition-led national army in control of Azaz.

Dalbarra said his forces were trying hard to crack down on unregistered weapons, usually smuggled in from regime-held areas, “but it had been difficult to keep track of the weapons out there.”

The weapons in Syria have come from places as far as Libya. In 2013, Qatar had reportedly transported Libyan Colonel Gaddafi’s weapons stash to the opposition fighters that it was supporting in Syria.

But weapons from Libya, other reports suggested, accounted for only a fraction of the total light weapons that have ended up in Syria since 2011. Russian arms and ammunition to the regime are by far the highest by any source, matched only by Iran, worth hundreds of millions of dollars.

After years of wear and tear, weapons used in the conflict end up in gun repair shops like the one where we met Abu Ahmed in Azaz.

Some were given to FSA units by the United States. Others are Russian made and supplied, used by the regime and smuggled to opposition-held areas, including this city of nearly 50,000 people.

The city of Azaz is witnessing a construction boom on the backs of a 2016 Turkish-backed mission which removed Daesh.

Azaz connects the land corridor linking FSA-controlled Afrin with Idlib to the south and Jarablus to the west. It’s an area Turkey says is “important for its national security and the future of the Syrian war”.

To incentivise its presence, Turkey has allowed at least 100 cement trucks to pass through the southern Oncupinar crossing to Azaz and beyond. New buildings, hospitals and schools are being constructed in and around the old city, including the area near the historic Azaz fort.

Truckloads of cement from Turkey whiz past security forces on newly tarmacked roads. The Turkish aid organisations are constructing a five-storey hospital with modern facilities near the old city. Shopping centres are also being planned in the now bustling town. But this economic boom hasn’t been restricted to regulated markets.

“Fighters love getting their hands on the 'Bin Laden,'" said Abu Ahmed pointing to a popular version of the AK-47. This version of the Russian-made assault rifle, which has a much shorter nozzle than the original, has earned the nom-de-guerre of its most well-known patron, Osama bin Laden. The founder of Al Qaeda turned the AK-47 into an international icon, and the weapon could be seen hung on walls behind or next to him in interviews with Al Jazeera and CNN.

“An original Russian 'Bin Laden' can fetch upwards of $1,500 depending on the condition,” said an excited Abu Ahmed. ‘’But originals are hard to come by,” he said.

To meet demand, Abu Ahmed has started to modify the longer Chinese version to resemble the Russian original. His retrofit is a huge hit among the hundreds of FSA fighters who frequent the weapons manufacturer.

“It is better for us as Syrians to make our own weapons instead of relying on weapons from China, Russia or the rest of the world," said Abu Ahmed.

To keep track of the weapons, Hisham Dalbarra’s FSA unit has started to issue blue-coloured weapons permits. It’s allowed opposition fighters under the FSA umbrella to carry guns that are registered with the national army.

“We have a big mandate which includes capturing black market weapons dealers, and putting in place a system for weapons licensing for people who need them,” he said.

Dalbarra said his men recently confiscated $100,000 worth of weapons on the road linking Azaz to Al Bab. The suspect was related to a senior FSA commander, who refused to intervene on his relative's behalf.

“We have a zero-tolerance approach,” he said. “It sends a clear message, that no one will be allowed to take the law into their hands.’’

But for Abu Ahmed, the business is brisk and he knows how to make the most of it.

“As long as the war continues, I will continue making weapons,” he said. “Of course this job is dangerous. As weapon manufacturers, we sacrificed many lives in this industry until we reached the current result in our fight against Assad’s oppression. We only have God and these guns,” he said. 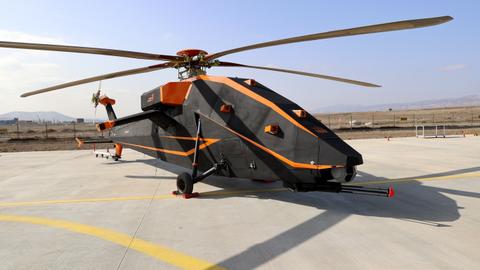 1
Capacity in Turkish sports stadiums to pass one million in 2021
2
Israel's autonomous 'robo-snipers' and suicide drones raise ethical dilemma
3
Endemic dune crickets unique to Turkey are ‘under threat from humans’
4
Lebanese politicians scurry to get Covid-19 vaccine ahead of citizens
5
A decade after the Arab spring, activism endures in the face of repression