If elected, the far-right candidate Jair Bolsonaro can turn the country's democracy upside down, experts warn.

Brazil will go to presidential and parliamentary polls on Sunday. Sixteen hundred lawmakers will be elected, including state level governors and legislators.

South America's biggest economy, Brazil has been grappling with a deteriorating economic situation since 2016. The political polarisation is likely to increase  after the elections, experts warn.

“The upcoming elections are the most crucial elections in Brazil’s history,” said Debora Thome, an academic at Brazil’s Universidade Federal Fluminense (UFF) and  the writer of the book Women and Power.

“The 1989 election was also intense because the military dictatorship ended in 1985. Then, it was a moment of fear about [the existence of] democracy,” she said. “Now we have fear about the stability of democracy.”

Jair Bolsonaro, a far right candidate with a military background, led the intended polls by 35 percent on Friday, according to recent surveys. He's running against Fernando Haddad, a leftist academic and a former minister of education.

While Haddad pledges to “make Brazil happy again,” Bolsonaro has been promising people to "make Brazil great again", a slogan that sounds similar to Donald Trump's slogan in the 2016 US presidential campaign.

“I am a Trump admirer,” Bolsonaro said in April.

Thome expressed her worries about where the country seems to be headed toward.

Across Brazil, particularly after the March assassination of Marielle Franco, a leftist progressive politician, who was overseeing a committee on the military’s actions in the poor suburbs of the capital Rio de Janeir, women activism has been on the rise against Bolsanaro and his right-wing allies.

But Thome thinks defeating Bolsonaro would need a stronger nationwide campaign, which can turn the public sentiment against the far-right politician. “It seems to me that in this conjecture, he has a lot of chances,” she told TRT World.

Bolsonaro defends Brazil’s former military dictatorships, which had ruled the country between 1964 and 1985 with an iron fist.

“We have very very high scores of homicide (in the world)” Thome said.

Growing vulnerabilities and insecurities of common Brazilians, she said, is what  Bolsonaro has been focused on during the campaign.

His tall promises and radical political stances have generated great enthusiasm among  the masses, making him yet another benefactor of populism, which has spread from Europe’s Hungary to Trump’s America to Duterte’s Philippines.

“Populism is a form of politics where the leaders are coming up with simplistic answers to complex questions. But answers that appeal to your average person who does not know a lot about the complexity of issues. That’s happening everywhere,” said Matthew Bryza, a senior fellow at the Atlantic Council, a US think-tank.

On the other hand, Haddad, the Workers’ Party (PT) candidate, is unable to reach the core of Brazil’s electorate. Some of the party’s top officials including the country’s popular former president, Lula da Silva, have been faced with corruption charges.

But a significant number of Brazilians are still associating Haddad with the PT’s legacy of corruption. Plus in the  face of recent financial crisis, there is a strong dissatisfaction about the PT’s economic policies which could further hurt Haddad’s chances.

“He is a very good candidate,” Thome said. “But the polls say right now it’s not possible that he can beat anti-Workers’ Party feelings. It’s really really strong in the country right now.”

People have mostly preferred to stand up against the far-right candidates across Europe by rallying around moderate candidates like France’s Emmanuel Macron who won the elections thanks to the coalition of anti far-right-minded parties.

But in Brazil, just like in the US, the Workers Party's moderate outlook doesn't seem to be convincing enough for the majority electorate, as per various poll surveys.

According to Gallup, a US polling organisation, less than 20 percent of Brazilians believe that Rio is doing the right thing for the country.  A decade ago the Brazilian confidence to the federal government was more than 50 percent.

She is also concerned that Brazil does not have strong institutions and civil society movements like the US to protect the South America’s largest democracy from shifting toward authoritarianism if Bolsonaro is elected to power.

Bolsonaro has courted several controversies in the recent past. He is accused of making insulting remarks about gay people, women, and minority groups.

The church issue, which is one of the decisive factors in Brazilian elections, might also favour Bolsonaro, who was able to secure most of the Evangelical support in the country. Brazil has a 30 percent of Evangelical population.

Behind the scenes, Israelis might also bid for a Bolsonaro, since various arms of the Israeli state and the Jewish lobby have long collaborated with evangelical groups in the country.

“He is a pro-Zionist man. He has visited Israel many times,” Thome said for the far-right front-runner for the Brazilian presidential elections.

Bolsonora, whose parents were of Italian descent, also holds a Catholic faith in a country which has the largest Catholic population in the world. Haddad, Bolsonaro’s most powerful opponent, has a Lebanese origin and believes in Orthodox Christianity.

“They [the Catholic church] did not make a clear statement” about their choice for the upcoming elections, Thome said.

“But they previously said that they will not vote for a non-democratic candidate.” 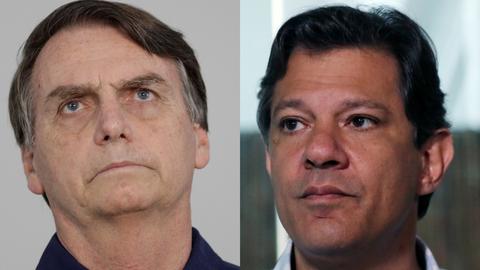 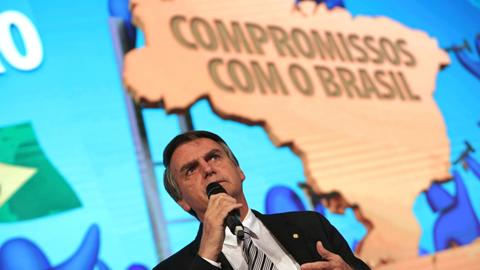 Crackdown on crime at heart of Bolsonaro's Brazil presidency bid