Can Pakistan’s controversial envoy fix ties between Islamabad and DC?

The outgoing administration’s decision to nominate a young businessman as the country's top diplomat in Washington has angered the country's powerful military.

Ali Jahangir Siddiqui, a Pakistani investment banker, wouldn’t have liked the reason for which he made the news in April 2013 –  a fistfight over a bonus.

The Cornell University graduate, who had carefully cultivated his image as a philanthropist by working for Pakistan’s perennial flood victims a few years earlier, was a director at Jahangir Siddiqui and Company Limited (JSCL) –  an investment firm controlled by his father.

JSCL wanted to reward Ali, who was also a shareholder, with a bonus of around $4 million for a deal he had helped secure. Other stockholders weren't too happy about the hefty payout to just one shareholder – apparently the biggest of its kind in the country's history.

On the day bonus was supposed to be finalised, men barged into the annual meeting of JSCL shareholders in a Karachi hotel. A fistfight broke out and people threw chairs at each other.

"I’d never seen anything like this," a journalist who witnessed the commotion told TRT World. "The worst that could be expected at such gatherings is to see shareholders elbowing each other for free snacks."

Ali, now in his late thirties, is in the news again. This time he made the headlines, over a tussle in Islamabad between the government and a military establishment unhappy with Ali’s recent change of careers.

Prime Minister Shahid Khaqan Abbasi, from the ruling Pakistan Muslim League-Nawaz party, nominated Ali as Pakistan's ambassador to the US in early March.

Ali, who also runs a local bank, has close commercial ties with Abbasi. They own stakes in the private airline Air Blue and Ali serves as special assistant to the prime minister.

His appointment as an ambassador to the most important capital in the world has annoyed career diplomats of the Pakistan Foreign Service who feel sidelined. It is also opposed by the opposition leaders.

But it's the military establishment that is particularly unhappy to see "a boy" take over as Pakistan's next man in Washington, which has taken a harsh stance against Islamabad in recent months, symptomatic of the fraught relationship the two countries struggle with.

"This a political appointment, which means Ali would have to step down when the term of the government ends in few months," Salman Bashir, Pakistan’s former foreign secretary, tells TRT World.

Pakistanis will elect a new government after the incumbent administration completes its tenure in June. Under the rules, political appointees in official service such as Ali will have to step down the day the government leaves the building.

Just days after Ali's appointment, Pakistan’s top anti-corruption authority opened an investigation into him. It dug up old corruption allegations, including the 2013 bonus. Though a government organisation, the National Accountability Bureau works independently.

NAB's move has discredited Ali's reputation which makes it difficult for the government to press ahead with its decision, Naeem Khalid Lodhi, a retired lieutenant general of the Pakistan Army, says.

"Washington would be wary of hosting an ambassador who faces corruption allegations."

Since Ali's nomination, more allegations have surfaced linking his businesses with the government's.

Just days before he was appointed the prime minister's adviser in 2017, billions of rupees from government pension funds were moved to prop up the deposit base of Ali's JS Bank.

Pakistan's civilian and military leaderships have been in a disruptive relationship since the country's independence in 1947.

The country has been through three direct coups, four military dictators, and multiple civilian political upheavals before a democratic transition from one elected government to another finally took place in 2013.

Pakistan’s powerful army still holds sway over the foreign policy especially when it comes to India, Afghanistan and the United States.

"I have no knowledge of what actually happened. But I would be astonished if a prime minister, who wants a decent relationship with the army, could have selected an ambassador without consulting with the army leadership," Zafar Hilaly, a former diplomat, says.

"The army is a major player in Pakistani politics. It has to be. Its soldiers are fighting and dying to preserve the integrity of the country."

Islamabad complains the country has lost more than 6,000 security personnel fighting militants, including multiple factions of Taliban who have attacked mosques and schools, post 9/11 compared to 2,410 American soldiers killed in Afghanistan.

The United States has foolishly given Pakistan more than 33 billion dollars in aid over the last 15 years, and they have given us nothing but lies & deceit, thinking of our leaders as fools. They give safe haven to the terrorists we hunt in Afghanistan, with little help. No more!

In his first tweet of 2018, US President Donald Trump announced he was suspending hundreds of millions of dollars in aid to Pakistan.

The US says Pakistan is playing a double-game in Afghanistan by backing the Afghan Taliban who are fighting coalition forces. Pakistan in turn says Washington tries to cover its own failure in the 17-year-old war by blaming Islamabad.

Earlier this year, the Trump administration went out of its way to ensure that a global money-laundering watchdog censured Pakistan.

The US also sanctioned five Pakistani firms for having ties with the country's nuclear programme. All this has reinforced concerns among Pakistanis that Islamabad needs to be careful in dealing with the US.

"They (the US leadership) would definitely like to have Pakistani diplomats who have a soft corner for Washington," Lodhi says.

The men behind the ‘boy’

One of the largest news organisations in Pakistan has backed Ali –  Jang Group, a media behemoth which owns a host of newspapers, websites and television channels in multiple languages.

"He is such an honest, hardworking and affable person and also possesses such a quality that if he puts his hand on a stone, it will turn into gold," read one story on Ali in Jang Group's English-language daily The News.

The story, which has since been removed from website, received criticism on social media.

"He is such an honest, hardworking and affable person and also possesses such a quality that if he puts his hand on a stone, it will turn into gold."

Tahir Khalil of The News was asked to write a grade two essay on "My Best Friend" so he wrote an ode to Ali Jahangir Siddiqui.

Ali's brother is the son-in-law of Mir Shakeel ur Rehman, the media mogul behind Jang Group.

"I don't have any evidence to back this up but I seriously think some people in government want to safeguard their own interest with this (Ali's appointment)," Lodhi says.

"They want someone to lobby for them in Washington. And what's better way to do that than to have your own guy there."

The government insists that Ali could use his business credentials to build relations with the Trump administration's key players, some of whom are also investment bankers.

Pakistan's current ambassador Aizaz Ahmad Chaudhry and his predecessor are both career diplomats with decades of experience.

Yet, it is not unusual for a government to appoint an ambassador in Washington based on politics rather than credentials, says Zafar Hilaly.

"We have had journalists and generals as ambassadors in the US," he says. "Our policy has been really inconsistent."

NAB has recommended that Ali be barred from leaving the country pending the investigation.

A request sent to Ali through his spokesman went unanswered.

In 2011, US special forces killed Al Qaeda leader Osama bin Laden in Abbottabad, a Pakistani city with a heavy military presence, a three-hour drive from the capital, Islamabad. That was the first time a foreign military force ran an overt operation deep inside Pakistani territory.

The country's leadership was still coming to terms with the enormity of the bin Laden operation when it emerged that Husain Haqqani, Pakistan's then-ambassador to the US, had asked US government to rein in the military.

The episode drove the wedge between civilian and military leaders even deeper.

Haqqani now lives in the US and as an analyst remains critical of the Pakistan army's role in Afghanistan and Kashmir, a region contested by both Pakistan and India.

Sharif was a member of the opposition at the time of the Haqqani debacle and played a crucial role in taking him to court. A week ago, Sharif told reporters that he regretted his involvement in the Haqqani case and allowing accountability laws “promulgated by a dictator” to remain unchecked. The same laws which could be used against Ali, whom Sharif’s ruling party has nominated as the US ambassador.

Prime Minister Abbasi recently held a one-on-one meeting with the US Vice President Mike Pence while he was on a private visit to the US with no minutes released, leaving some worried about the kind of support the outbound government was seeking before the elections.

“Countries like the US, Britain and Saudi Arabia enjoy a great deal of influence in Pakistan’s politics. When our ruling elite are in trouble, they reach out to either Western powers or Arab dignitaries for help,” Kanwar Dilshad, a former top Pakistani bureaucrat, told The Express Tribune.

Can a banker fix nightmarish relations?

That was the first high-level contact between the US and China in decades. And the man who made it happen was Zafar Hilaly's father, the late Agha Hilaly. He was Pakistan's ambassador in the US and a senior diplomat.

"I still have the letters which (President) Nixon wrote to my father, thanking him for his help. They –  my father, Kissinger, Nixon and Yahya Khan (Pakistan's former president) –  had a very good relationship."

Agha Hilaly ferried letters back and forth in the run-up to the historic meeting.

That trust no longer exists.

Pakistan is still a US ally and partner in the war on terror but differences between the two have reached a point where Islamabad is reconsidering the relationship, officials say.

"This relationship is causing so much headache and heartburn, the sooner it ends responsibly the better," says Zafar.

The US constantly blaming Pakistan for its own failure in Afghanistan has widened the gulf, Zafar says. "Washington supports a regime in Afghanistan that has lost half the country [to the Afghan Taliban],” he says.

“This (Trump’s) administration doesn’t want to lose the war in Afghanistan. It’s very difficult  to make progress in Afghanistan as long as Taliban have sanctuaries in Pakistan," Ronald Neumann, a former US ambassador to Afghanistan, says.

While Pakistan is not completely responsible for the continuing war in Afghanistan, Neumann says its interference has become an issue.

And while Agha Hilaly managed to patch Nixon through to Beijing, no one is convinced an investment banker could have such success at a time of complex overlapping conflicts of interest in local and international politics. But even a career diplomat might not have the answer.

"The ambassador cannot make black into white. Diplomats cannot change policies of their governments," says Neumann, who is also the president of the American Academy of Diplomacy.

"If you have a really big difference in political views of two countries, even a good diplomat cannot make much difference." he says. 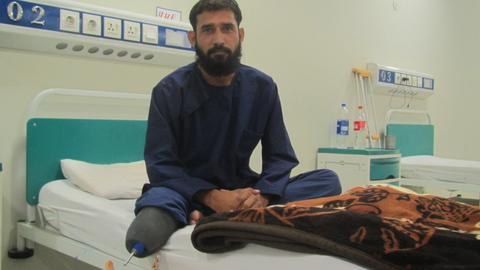