Indians spend billions buying the precious metal as a status symbol, dowry for daughters, investment and a gift to temples.

If there’s one thing that Indians love more than cricket, it has to be gold. The South Asian nation is the world’s second largest buyer of the precious metal, spending over $28 billion importing gold last year.

Demand for gold generally goes up in times of uncertainty as people move savings to more secure assets that preserve value for a longer duration.

Indian households save roughly 30 percent of their income. A large part of it goes into buying gold. For many, that’s not even spending but simply an investment to preserve their wealth.

The belief that the price of gold will continue to rise is at the heart of the sustained Indian interest in the metal. But the novel coronavirus pandemic has dampened its demand to what could be a 30-year low.

In some ways that’s a good omen for the Indian government, which is facing a hard time stopping the slide of the currency, the Indian rupee. Lesser gold import means a narrow trade deficit, which can help stop the rupee’s depreciation against the dollar.

The main driver behind demand is Indian weddings where parents give gold jewellery to their daughters, and relatives and friends buy it as gifts.

New Delhi has imposed a strict lockdown to contain the coronavirus spread by shutting down schools and businesses. This has also forced people to postpone weddings.

More than 50 percent of India’s gold demand originates from weddings, according to some estimates.

Parents spend years saving money for their daughters’ dowry, which mostly consists of gold jewellery. Gold bangles, necklaces and rings are passed on as family heirlooms. A dowry is what a girl takes with her when she moves in to her in-laws’ home after marriage.

Every year more than 10 million Indian couples tie the knot and over the years, as consistent economic growth has lifted tens of millions out of poverty, the expenditure on weddings has shot up. As a matter of fact, wedding ceremonies of the super-rich have become phenomenally expensive.

In 2016, G Janardhana Reddy, a mining baron and a politician, spent $74 million on his daughter’s wedding, sparking outrage in a country where millions of people still live in abject poverty.

With households delaying wedding plans, the All India Gem and Jewellery Domestic Council says gold consumption this year may drop to between 350 and 400 tons, much lower than the 690.4 tons in 2019, according to Reuters.

The importance of gold is interwoven with Hindu mythology. Across the country, devotees spend a considerable sum of money to buy the precious metal to mark holy occasions.

For instance in the southern Kerala state, gold plays in an important part during the Vishukkani new year celebrations. People buy gold on the first day of the Diwali festival as they consider it a good time to bring wealth into their homes.

Hindu temples in India are sitting on thousands of tons of gold coins and bars that devotees have gifted over the centuries. It is estimated that Hindu temples have a reserve of 20,000 tons - many times the annual global supply of 4,776 tons.

An audit of Kerala's Sree Padmanabhaswamy Temple in 2011 found that the historic structure had $20 billion worth of gold ornaments in its vaults. To put that in perspective, the total amount of gold in circulation in 1923 was roughly $6 billion.

In 2015, the Indian government introduced a monetisation scheme to mobilise the metal from temples and households in a bid to cut imports. Under the scheme, gold can be deposited against an interest income. The gold thus collected could be resold to meet domestic needs. 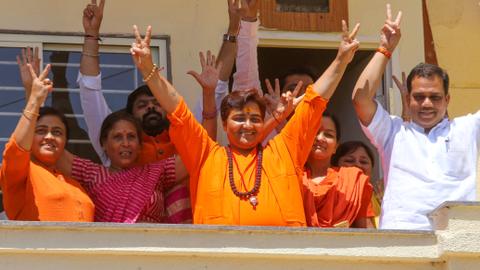 The Indian parliament welcomes members accused of terrorism and rape