Croatia accused of physical and sexual assaults against refugees

Testimony from asylum seekers on the Balkans migrant trail presents evidence of push-backs and inhumane treatment by the Croatian police, a Danish Human Council report says

Refugees and migrants crossing the Bosnian border with Croatia have sustained serious injuries. They allege they have been whipped, beaten and sexually abused by Croatian authorities.

The Danish Refugee Council (DRC) has documented testimonies of more than 70 refugees at the Miral Camp in western Bosnia who detailed the attacks at the Bosnia and Herzegovina border with Croatia between October 12 and October 16.

All of the people interviewed by DRC had visible signs of extreme violence, including bruises and cuts, all a result of alleged Croatian police attacks, the report said.

“The testimonies collected from victims of push backs are horrifying,’’ said Charlotte Slente, DRC secretary general. “More than 75 persons in one week have all independently reported inhumane treatment, savage beatings and even sexual abuse.’’

In one incident, on 12 October, the Croatian police officers stopped five Afghans, including two minors, as they crossed the border. One ran away and 4 others were detained at the police station.

“Two days later they were taken to court, where they say they were to ‘appear as witnesses in the case launched against the fifth member of the group – the one who escaped,’ who had been accused of violent behavior towards police," DRC said in the report.

Asylum seekers told DRC officials that what followed was gruesome sexual assault and robbery. They said they were taken “to some unknown location, where they were put in a van in the charge of 10 armed people, dressed in black and with full face balaclavas, army boots and with flashlights on their foreheads.”

Their belongings were taken, forced to strip down to their underwear and forced to lie face down on the ground. One migrant said a man using a branch sexually abused him while the refugees were “punched, kicked, whipped and beaten.”

“One man in black was standing on the victim’s hands, preventing any movements,” reads the report. Medical reports confirmed that injuries were sustained with the use of a whip.

Mustafa Hodzic, a doctor in Velika Kladusa, who examined the man who said he had been sexually abused, said he can confirm the signs of clear sexual violence.

“The patient had wounds all over the back of his body, on his back and legs...I have never seen anything like it. Even if it isn’t the first time as a doctor [that] I have seen signs of sexual violence on migrants, which, according the asylum seekers’ accounts, were perpetrated on Croatian territory by Croatian officials dressed in black uniforms,” he said.

Another migrant, a Pakistani, said he was ordered to strip naked along with two other migrants as they were put in a van. Once they arrived at a garage-like venue, five other migrants were waiting there, as well as men dressed in black.

“They started to beat us with batons, and the third one took his mobile phone and took a selfie with us without clothes,” the Pakistani man said.

The migrant said one group was forced to lie on the ground, and the other on top the other group, all naked and beaten.

A minor, who tried to tell them his age, fainted as a result of the beating, the Pakistani migrant said. His friends tried to intervene, but they were beaten, too.

“We don’t care where you are from or if you will return to Bosnia or to your country, but you will not go to Croatia. Now you have all your arms and legs because we were careful how we hit you. Next time it will be worse,” were the threats they heard before being deported, the report said.

The DRC shared its report with the European Commission and demanded action while the UNHCR asked the Croation government to set up an independent assessment group.

The EU Commissioner for Home Affairs, Ylva Johansson said she’s taking the reports of inhumane and degrading treatment of people at the Croatian border very seriously, in a series of tweets on Wednesday.

“I am planning a thorough discussion with the Croatian authorities on these and other reports of fundamental rights violations,” she said.

“Croatian authorities have committed to investigate reports of mistreatment at their external borders, monitor this situation closely and keep the Commission informed on progress made,” adding that she reminded the Croatian authorities that effective border management must be conducted in full respect of fundamental rights.

In the past, the EU has been accused of covering up Croatia’s failure to protect migrants at the border. A Guardian report on June 15 revealed that emails written by Brussel officials had decided against the full disclosure of Croatia’s lack of commitment to a monitoring mechanism. This is due to the fear of a backlash.

Stranded in a Serbian border town, refused the right of asylum 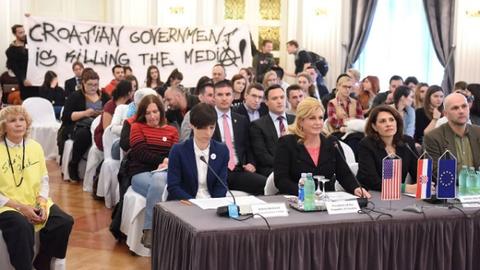