How one woman’s rape is challenging Japan’s patriarchal culture

A journalist who went public with her rape allegation is changing the rules in a country where male privilege dominates culture and consent is a blurred line.

Seoul —  Shiori Ito switches on the hotel television five minutes before 6pm. Sitting cross-legged on the double bed patted down with white covers, she briskly flips through the channels in search for one which will air the Nobel Peace Prize announcement.

Ito, 29, has heard a rumour the peace prize might go to the #MeToo movement to recognise women who have spoken up against sexual assault. When the prize is announced at 6pm, it is instead shared between Congolese gynaecologist Denis Mukwege and Yazidi survivor of war crimes Nadia Murad, who respectively have been fighting against sexual violence in war and conflict.

She sighs, both pleased and moved. “Rape is used as a weapon because it affects the person, their family and the community for the long term,” she says.

“It’s such a powerful and horrible weapon... I’m really happy [these two people] received the Nobel. We need to talk more about how rape happens and why.”

Ito would know. She was a young journalism intern working in Tokyo three years ago when she says a prominent journalist raped her following a dinner meeting.

Ito lodged a complaint against Noriyuki Yamaguchi with the police, which in itself was fairly unusual. When her case stalled after a warrant against Yamaguchi was suspended, Ito did something even more unusual: she went public with her claims in May 2017.

This was an astonishing decision in Japan, a country where until then, conversations around assault had been few and the rape laws dated back to 1907.

“It is very rare, Shiori is perhaps an exception in speaking up about her experience,” says Tatsuro Hanada, director of the Institute for Education in Journalism at Waseda University and a journalism professor.

Japan is in some ways still deeply patriarchal, despite its modern trappings and economic progress.

Japan’s ranking dropped from 101 in 2015 to 114 in 2017 in the annual Global Gender Gap Report released by the World Economic Forum (WEF). It is ranked 165th in the world when it comes to women’s political representation. Boardroom diversity has been a problem, with recent efforts to include more women at the top.

“Japan is a very male-dominated society still and in these circumstances it is difficult for women who are victims of violence. But I think it is slowly changing thanks to Shiori and others,” Hanada says. “The discussion has begun.”

It was April 2015.  Ito was 25 years old and new to journalism when she went to dinner with Yamaguchi, who was the Washington bureau chief for Tokyo Broadcasting System at the time and Prime Minister Shinzo Abe’s biographer. The two ate and drank, and then left the restaurant together in a cab.

But she has no memory of leaving, as she had passed out already. Ito believes her drink was spiked.

Later, Yamaguchi told the New York Times she was too drunk to go home alone so he took her back to his hotel. He also said he never sexually assaulted her.

When she came to, she found herself on a bed in a hotel room, with Yamaguchi on top of her. She says tried to get him to stop, but he didn’t.

Ito went to the police soon after and lodged a rape complaint.

Few women who have been raped in Japan report it; less than 5 percent. Rape, until recently, had a limited definition and the system to report it is incredibly difficult to navigate. This all makes it extremely difficult to know the frequency of rape or the prevalence.

Rape cases that are reported are not always prosecuted. According to police data from 2015, 53 percent of such cases were not prosecuted.

Ito was accused of being a honeytrap and publicity seeker, her clothes were judged and the standard insults were hurled at her from a skeptical public.

“Some didn’t believe her, they called her names,” says Chisato Tanaka, another journalist. “There is so much pressure from society as a woman in Japan.”

Ito was viewed with suspicion because she wasn’t teary enough, she says.

Later she had to reenact her rape for the police with a giant doll, an event that some have likened to a second rape.

The police did collect CCTV footage of the two entering the hotel, a statement from the cab driver who drove them home that night and DNA from her clothing.

Though a warrant was issued, Yamaguchi was never arrested and in August 2016 the prosecution said there wasn’t enough material to proceed. Japanese lawmakers later held hearings to understand whether the case had been dropped because of political influence.

Ito’s appealed the decision not to prosecute and the appeal was turned down in September that year.

“That was when I was seriously thinking of giving up my life,” says Ito. “The man I had accused had so much power, I was scared for my life and my family. I felt it would be better to end it.”

Since childhood she had wanted to be a journalist and to tell stories. Now she was becoming the story.

“First I thought as a journalist I should not talk about it; you need a third person to talk about your story,” she continues. “But I thought I should do my best and that was by telling my own story. I would never think of that as ‘journalism’ but I thought that’s the only thing I could do."

Anonymity, she believes, would have never worked.

In May 2017 after the police stopped pursuing her case, Ito — until then a nameless complainant —  appeared before the media and, her face to the world, declared what had happened to her.

“Rape was never talked about, it was so taboo, and there was a strong stigma around it,” she says. “I never really imagined how it is to be sexually abused or be raped. When it happened to me it was shocking that we have almost no support from the police, hospitals and rape crisis centres. Most of these places failed for me and that’s why I felt we need to talk about it.”

Now as the #MeToo movement slowly makes itself heard in Japan, Ito has become a prominent advocate for speaking up.

She published Black Box, a book detailing her account in Japanese and it is now being translated into various different languages. The BBC released Japan’s Secret Shame, an hour-long documentary featuring her struggle against the hostile environment for women reporting assault in Japan.

Now Ito is fighting a civil suit for damages against Yamaguchi, her accused rapist.

In the past year, other women have also come forward publically.

In April, a finance ministry official resigned after a magazine reported that he had sexually harassed a female television journalist; he denied the accusation. In May, a group of 86 female journalists formed the Women in Media Network Japan (WiMN) to expose harassment and abuse in the profession.

Ito’s struggle began before the movement crystallised, but it has given her renewed confidence and visibility.

“There were so many voices on the same issue.”

Her family too became more understanding. “I felt like they started seeing me as not that crazy,” she says.

Though Japanese society is hesitant to talk about sexual abuse or misconduct, Japan is highly sexualised.

“It’s so funny, we can’t talk openly about sex, but if you go to a kiosk or convenience store you can see photos of naked women and in daily life women are sexualised. There is such an imbalance. It’s so wrong,” Ito says.

Consent has been ambiguously treated in Japanese society and popular culture.

“In our culture there is no hard line of ‘no’ so then how do you know [what consent is]?” she asks. “If they take ‘no’ as a ‘yes’ what kind of language can we use?”

As she narrates her story in the hotel room she is staying at for the conference, the room resonates with the memories of another hotel from a more traumatic time.

“When I couldn’t sleep at night because of how the bed is located and the room is similar, I had a panic attack and I was thinking it has been three years since what happened, why is it still here, why is it still haunting me?” she says.

She sometimes still relives the trauma when she sees a story about herself with Yamaguchi’s picture printed alongside. “Sometimes it hits me, my body shakes, I suffer a lot,” she says.

“But I have to find a way to separate myself. You have to tell this story and see it as a third person would.”

In the BBC documentary, Ito renders her tale with minimum fuss, reliving the events of the night again, visiting a rape crisis centre and checking for bugs in her apartment.

And in the public eye, this story has inextricably tied her up with a single event. In one scene, you can see a flicker of recognition in a group of women as they see Ito walking to court. “She’s not the Ms Shiori who was raped, is she?” one woman asks another, as if she spotted a celebrity.

“It happens. I’m living my life and for them. I’m the girl who was raped and I don’t want to have that label. The word ‘rape’ follows me, and I didn’t want that,” she says.

“At the same time I am confident and good at what I do, so one day people will forget about this and remember something else. That’s what I hope.”

Ito now works as a freelance filmmaker and journalist in London. Though the criminal proceedings failed, Ito hopes to win damages for the trauma she says the incident left her with. She isn’t sure when the next hearing will be. Or how she might react when she faces the defendant in court.

In the meantime, she has been receiving letters from people who have come across her story and in listening to it, found the strength to tell their own.

“Most aren’t able to tell anyone and it’s their first time talking about it,” she says. “It makes me feel like this is why it’s worth it."

Something happens at the journalism conference, after Ito’s session.

During the interactive segment, a short, bespectacled woman goes up to the mike in the aisle to ask what should be the last question of the day.

After identifying herself, she begins: “I don’t have a question really.”

Then pauses. “Me too,” she says, her voice breaking. “I lived with this pain for a very long time.”

The woman goes on to briefly narrate an episode of childhood sexual assault, and how she was never believed. She begins to weep silently.

At the front of the room, Ito’s face crumples. She too begins to weep silently.

When the woman finishes, Ito walks down from the dais to the centre of the aisle. The two women hug.

Bhavya Dore is a Mumbai-based freelance journalist who has written for Caravan, Quartz, Scroll, Forbes, Hindu, BBC, Mint, ESPN and others. Her reporting in Sri Lanka is being supported by the IWMF. 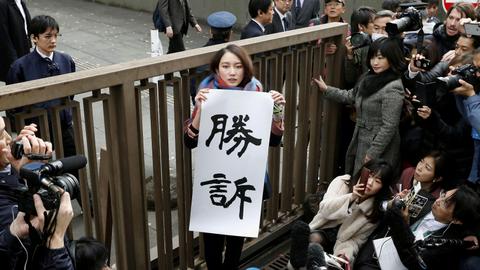