In the southern Sindh province, where powerful feudal lords have decided the fate of elections for years, a new breed of politicians has come forward to upset the status quo.

In a part of Pakistan where people live in mud houses and children die of malnutrition before they turn five, a woman has decided to take on powerful feudal lords in upcoming parliamentary elections.

Sunita Menghwar, 30, is among a new breed of politicians consisting of ordinary citizens who say they are tired of an elite that rules the southern Sindh province where many towns and villages lack basic necessities such as drinking water and electricity.

“Women in my village spend their whole day  fetching water for their children,” she told TRT World. “The politicians come seeking votes, but they never do anything about our problems once they get elected.”

Sindh has been a bastion of support for the Pakistan People’s Party (PPP), which has given the country two of its most charismatic prime ministers —  Zulfiqar Ali Bhutto and his daughter Benazir. PPP has governed Pakistan a record four times.

Zulfiqar was hanged by a military dictator in 1979 and Benazir was assassinated by Taliban militants in 2007.

The party is now being led by Benazir’s Oxford-educated son, Bilawal.

Menghwar is a lower-caste Hindu from the desert region of Tharparkar, which borders India. Her community is often referred to as the ‘untouchables’ —  the disadvantaged class that lives under the shadow of rich and well-connected upper caste Hindus.

But besides people from her village many other lower castes such as Kohli and Bheel have come forward to support her election bid as an independent candidate, she says.

Women in Thar, with white bangles circling their hands up to the elbows and wearing colorful hand-embroidered dresses, struggle to bring home water everyday, yet most of it is  contaminated with arsenic and fluoride, according to local NGOs.

“Our men go to the fields. Our children become herdsmen at a young age instead of going to school. And women have to wake up early every morning to fetch the water.”

Walking long distances multiple times under an intense sun is a grueling task. “We use buckets and then haul them back to the village, sometimes covering two kilometers during just one trip,” she says.

Half of Pakistan’s Hindu population lives in Tharparkar, which makes it an important vote bank. More than two-thirds belong to the lower castes, considered ‘untouchable’ by the wealthy and well-connected Hindus.

Until a few years ago, it was inconceivable for people from Menghwar’s  village to even talk about the possibility of contesting elections against powerful landlords. But things began to change in 2015, when lower middle-class Hindus known as Dalatis emerged as power brokers in the local elections.

“Around that time, women in my village encouraged me to contest elections. I guess I was too vocal,” says Menghwar.

“If I get elected, I will be the first woman from this area to have challenged the status quo and see the parliament.”

Dr Sono Khanghrani, a Dalit social activist, says despite a sizeable chunk of voters in Tharparkar belonging to lower Hindu castes, the established political parties hesitate in nominating a candidate from among them.

"Only upper class Hindus represent us in parliament and assemblies.”

Menghwar says she’s lucky that her husband has stood behind her decision, and villagers have come forward to support her financially even with their meagre incomes.

Around 17 percent of the members of national parliament are elected from Sindh, where the PPP has been in government since 2008.

“After the assassination of Benazir Bhutto, PPP lost political credibility because of rampant corruption, bad governance, and nepotism amongst its ranks,” says Ali Rind, a senior journalist and editor of a current affairs magazine.

Rich landlords, spiritual leaders who use their family ties to manipulate devotees and tribal chiefs who exercise control over villagers replaced the committed working-class leaders  of the party.

“These influential people get the vote and rule without accountability,” says Rind.

Now people from unlikely backgrounds have risen to challenge them.

In Larkana, the hometown of PPP leaders, where politicians roam around in 4x4 Land Cruisers, a college principal, Liaquat Mirani, is going from house -to-house on a donkey-cart seeking votes for a provincial assembly seat.

“I have the support of poor peasants, labourers, writers and those who want to see change,” he told TRT World.

Until very recently, signing up for elections was a family business in this town. An ordinary person wanting to contest the elections risked being kidnapped or put behind bars on false charges at the behest of more established politicians, says Mirani.

But that is slowly changing.

“People didn’t have an alternate before. I’ve become that alternate. Now let’s see where the wind blows.”

Mirani comes from  a family of fishermen, but over the years he worked his way up to earn a computer science degree from a university, something he is really proud of.

“My opponents are political heavyweights, they are rich and powerful. So I don’t mind even if I lose in the contest. The important thing here is that I have showed people that we can resist and challenge those who are corrupt.”

Successive governments in Sindh province have been accused of corruption that involves giving lucrative contracts to friends and leaders of the politicians. It also ranks poorly on many social indicators.

Menghwar and Mirani are not alone in trying to upset that system. More than 300 independent candidates are contesting for the election from national and provincial assembly seats in the province, according to the Pakistan Election Commission.

Even a senior journalist has jumped into the fray. Ali Qazi, editor of a leading Sindhi-language newspaper Daily Kawish, has established a political party of his own. “People from same political dynasties who have tyrannical mindset get elected time and again. We must change that.”

Qazi is running against Sharjeel Inam Memon, a senior PPP leader, who is currently in jail on graft charges.

“These have influence, political muscle and money to buy votes. They consider voters as commodity. But their days are numbered,” he told TRT World.

Better internet connectivity and social apps such as Facebook and Twitter, which help move information and news instantaneously, have also emboldened people to take on political elites.

In the run-up to the elections,  videos have surfaced that show the once-arrogant politicians pleading before voters they have long ignored in their constituencies.

“How can we vote for you? The last time we saw you was five years ago during the previous election campaign … we can’t vote for you,” a young man in the impoverished Kashmore district shouted at PPP’s former parliamentarian Saleem Jan Mazari. The video of the incident went viral.

Other politicians including the opposition leader in the national assembly, Khursheed Shah, also faced the wrath of the people who shouted at them and shoved them in front of mobile phone cameras for lack of jobs, poor healthcare and dilapidated roads.

“This is a time of social awakening. Young people have phones and they are connected. Influential politicians cannot exploit voters so easily now,” says Ali Rind, the journalist.

“I remember the days when these politicians would visit villages and towns, but no one had the courage to question them about anything. Now even the villagers are resisting.”

Another shift that has shaken the old political order is the participation of non-Muslim minorities in a big way.

Traditionally Hindus, Parsis, Christians and Sikhs had come to the parliament on reserved seats for the minorities — and not as a result of general contest at the ballot.

Dozens of non-Muslims are contesting this election as independent candidates, according to the electoral body.

“I am up against two powerful people. One is a chief of his tribe and the other is a spiritual leader,” says Neelam Walji, a candidate of the party of former prime minister Nawaz Sharif.

According to the election commission record around 11 non-Muslims — both men and women — are contesting the election on behalf of various political groups.

These candidates from a middle-class background say they have stepped in to fill a vacuum left behind by elite politicians who are unaware of the problems an average citizen faces.

For Mirani, the college principal, the attitude of the voters is shifting.

“We have shown you don’t need millions of rupees to contest the elections. The change can come only when voters have options. Now let’s see what happens.” 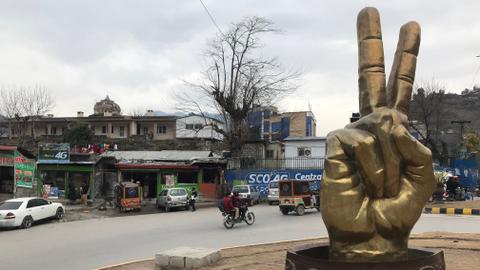 On Kashmir Day: A look into Pakistan-administered Kashmir