Visited by more than four million people in 12 countries in four years, the NASA Space Exhibition has arrived in Turkey, featuring special pieces from outer space and dozens of high-tech space instruments.

The National Aeronautics and Space Administration (NASA) has put on display the mysterious dimensions of the universe and some of the remnants of space travel at an Istanbul mall.

Starting from December 8, the exhibition is hosted at the Metropol Istanbul Mall, attracting space enthusiasts and people from diverse backgrounds. The event allows them to closely experience the mysterious dimensions of the universe and space travel.

“NASA, which carries out studies to shed light on the unknown face of space, takes us on an exciting journey with this magnificent exhibition,’’said the company representative Merve Timurlenk Sengul, who kickstarted the exhibition with her opening speech.

The exhibition includes more than 200 pieces, displaying life-size artefacts that have been used for actual NASA space missions.

One of the most fascinating pieces in the exhibition is the real Moonstone brought from space that visitors can touch.

Here's a picture of Moonstone!

Moreover, there are replicas of space rockets, full-size spacecraft, and a 10-meter-long model of the Saturn V rocket. The picture you see below shows inside of one of the spacecrafts. Feel free to imagine yourself lift off!

The visitors get a chance to observe the personally worn clothes of astronauts, the equipment used in missions, astronaut menus and the models of the Apollo capsule, Sputnik 1 satellite and the International Space Station (ISS).

Here you see an astronaut trainer that is programmed to familiarize the astronauts with the space atmosphere.

Additionally, the exhibit consists of a prototype model of Elon Musk’s SpaceX Starship that was initially developed for Mars exploration.

Speaking of Mars, here, have a look at a simulation that seems to be a mission on Mars.

According to the ITU ETA Foundation Doga College, one of the main sponsors of the exhibition, it aims to spark not solely information but also desires to improve students and children's scientific curiosity and analytical thinking.

In this regard, various activities are planned to be organized in one of the exhibition areas called Doga Space Shuttle that will both entertain and arouse curiosity for students and young people.

Young people would get a chance to wander inside the international space station established in Minecraft, a digital video game.

‘’Apart from that, we established a Mars campus where we define different missions on the surface of Mars,’’ Ozkan said while emphasizing that they collect the materials necessary for this campus from the surface of Mars and simulate a journey from Earth to Mars.

Previously, a person wearing an astronaut outfit has drawn great attention by walking around the metro stops in Istanbul for the pre-opening promotion of the exhibition.

The exhibition is scheduled to continue between December 9 and December 30. 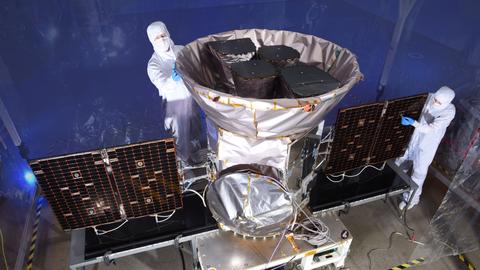