In Syrian province, babies are abandoned on streets, trash bins

As impoverished parents abandon newborns, a new generation of children with unknown parentage emerges in the war-ravaged country.

IDLIB, Syria — On a balmy June evening earlier this year, Ahmed Al-Saleh, 33, was walking home from work when he heard the cry of a baby piercing through the dark in this war-ravaged city in north-western Syria. As he looked around, he saw a cardboard box lying by the roadside. And inside the box was a newborn baby— a girl.

One look at the baby was what it took for Ahmed to make up his mind. He would raise this girl as his own. And when he reached home with the baby in his arms, his wife too felt the same way. He bought milk for the girl, and also took her to a doctor to check on her health. ''The girl I found came into my life as a gift from God, and I will not abandon her, no matter the circumstances,” Ahmed told TRT World

Ahmed’s story is not rare in Idlib, where incidents of parents abandoning newborn babies, and even older children, have become one of the biggest social crises in recent times. Babies have been found abandoned on the streets, in mosques and even in trash bins. Most of the cases are attributed to impoverished parents unable to support their children. Deaths of children due to starvation and cold weather have also been reported.

The only opposition-held province in Syria, Idlib’s economy lies in tatters, like in the entire country, after 10 years of a violent conflict. Millions of displaced people have found sanctuary in Idlib province where they live in temporary shelters, struggling to pick up the pieces of their lives.

The Turkish NGO, the Orphan Foundation, estimates the number of orphans — including abandoned children — in Syria to be more than 1.2 million in a population of around 17.5 million in the country.

Finding a baby might be easy but the process to legally become foster parents is not, as Ahmed found out.

“I was able to save the girl from inevitable death, but her future remains unclear due to difficulty in registering her in the official departments or obtaining identification papers," he said.

“I am unable to go to the Syrian government-controlled areas in Hama governorate, for fear of being detained by Syrian security forces.”

Murat Yilmaz, President of the Orphan Foundation, told TRT World that there are many different authorities in the region and each authority has its own orphanages.

"When it comes to caring for orphaned children, a child that is found will be brought to the orphanage administered by the respective region. However, I want to say this - orphanage culture is something that is more common in the west. In the east - in Iraq, Syria, and so forth, there isn't such a culture of orphanages because there are large families. In this context, even if a mother or father passes away, there are maternal and paternal aunts, maternal and paternal uncles, grandparents to take care of children," Yilmaz said.

Even in cases where there are no relatives, he said a neighbour will take the responsibility of raising the orphaned child.

"For instance, there was someone I knew in Idlib - he was caring for 3 children he didn't even know on top of his own children. This is how the situation is in Syria. .... So yes, there are abandoned children, but these are not in great numbers. It is seen as a matter of namus (honour) - if there is a child who has nowhere to go, a relative will definitely step forward to take care of the child - even if he has, for instance, 6-7 children of his own. Family ties are very strong. So in that sense, you won't find a lot of abandoned children on the streets."

Lawyer Walid Al-Awad, 44, based in the city of Sarmada, north of Idlib, explained that though Islam forbids adoption there are legal, alternative ways to become foster parents. “We call it ‘guarantee’ or ‘alternative care’,” he said.

A family willing to take in a child must write a pledge in the presence of four witnesses. The pledge includes agreeing to hand the child over to his relatives in the event they appear. After examining the house and ascertaining the family’s ability to raise a child, it is agreed to name and register him as a child of unknown parentage.

Samer Al-Qasim, 40,  decided to hand over a baby he found near a mosque, to the police in Harem. “I asked people in the area about the baby but no one knew about the boy’s parents,” he said. Police handed over the baby to a care home, House of the Child in Sharmada, a city north of Idlib.

The spurt in the number of children of unknown parentage prompted Syrian activists to set up the centre to take care of these children and others abandoned by their families.

Director of the House of the Child, Younes Abu Amin, told TRT World: "The Child Home Organisation opened the child care centre in the city of Sarmada, and the number of children registered has reached 167, from the age of one day to 18 years, who receive all the needs — food, clothing, education and health care.”

The centre works to reunite the child with her family, relatives or an alternative family. Working with 19 employees, the centre provides psychological support and education.

Activists say that helpless parents abandon their children mostly in the hope that they would find a better home and life elsewhere.

“Children of unknown parentage are rising due to the war, displacement, the spread of early marriages among underage girls, and family disintegration,” says Idlib-based social worker Nour Al-Daghim, 34.

Unemployment is high among the displaced populace, leaving parents with no means of supporting families.

As a new generation of children with unknown parentage emerges, Nour expresses concern that in a society that stigmatises orphans, these children could grow up with deep psychological scars as they face abuse, humiliation and bullying all along the way. 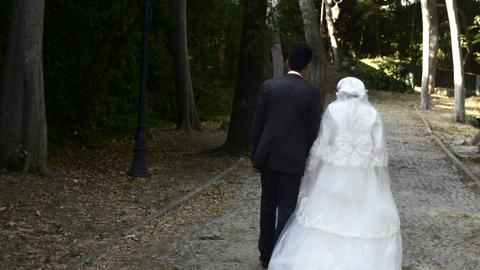