After taking refuge in north India's Jammu City five years ago, the Rohingya refugees from Myanmar are now facing death threats – and the possibility of another displacement – from the politicians and groups linked to the ruling government.

JAMMU, India — Muhammad Younis sits in the corner of his small, tin-roofed shanty, and wipes the sweat from his forehead. The sweltering heat of June has turned his hut into a furnace but the weather conditions don't bother him much. Something else is eating at him from deep inside.

Younis, 41, is a Rohingya Muslim from Myanmar, an identity that has sometimes proved fatal in recent years. A February report by the United Nations revealed that Burmese security forces have committed mass murder, tortured and raped several thousand Rohingya in the past few years. As a result, tens of thousands of the vulnerable minority, stripped of citizenship, have fled the country. Although Bangladesh is hosting a majority of the displaced, several hundred have trickled into India as well.

But for them, life isn't easy in India either. Younis moved to north India's Jammu City five years ago. There he managed for two years to scrape up some work at local construction sites and built a makeshift shelter on the outskirts of the city, where he lives with his wife and three children. But the circumstances turned unpleasant soon after the Hindu far-right Bharatiya Janata Party (BJP) won India's national elections in 2014 and formed the government in India, replacing a secular Congress Party.

Ever since, the Jammu branch of the BJP, which runs the city in an alliance with a Muslim-majority Peoples Democratic Party (PDP), feels emboldened to propagate hostility toward Rohingya refugees.

Local BJP legislator Ravinder Raina is at the forefront of a campaign, seeking expulsion of Rohingya Muslim refugees from the state.

Raina, who is in his mid forties, is short and sturdy with salt and pepper hair. A man known for his bouts of anger, he shot into the national limelight in the fall of 2015, when he beat up an opposing Muslim legislator in the local assembly for hosting a party where beef was served. Since Hindus consider the cow sacred, the BJP government has banned the slaughter of the animal in several states. The move has spurred vigilante violence across the country, with armed groups attacking and killing Muslims they suspect of consuming or storing beef.

In Jammu City, Raina's activism is another expression of the party's anti-minority agenda. He has now turned his focus on Rohingya refugees, describing a few hundred of them as a demographic threat to the city's Hindu majority population.

Raina has manufactured a perverse narrative that's based on the poverty of Rohingyas. "They (Rohingyas) are foreigners. They are very poor people and can be used by the ISI (Pakistani intelligence agency) or the Islamic State (Daesh). They can destabilise the state," he told TRT World.

He's been claiming that after the refugee influx, the crime rate in Jammu City has shot up. "There has been increase in various crimes like molestation, abduction and thefts," he says.

Raina's politics are not only troubling the Rohingyas, but also antagonising the PDP leadership, who are at the helm of the local governance with the BJP's support. The two parties entered in what many critics have described as an "unholy alliance" in early 2015. While the PDP rose to power on Muslim support, the BJP's core electoral base lies among the region's ethnic Dogra Hindus.

The coalition partners have had disagreements over a range of issues, including the fate of Rohingya refugees. Since the PDP leadership is dominated by Muslims, they are sympathetic toward Rohingyas. "I don't think Rohingya refugees are any way harassed by the government. This is a humanitarian issue and we have to handle it likewise," says senior PDP leader Nizamuddin Bhat.

Raina has been warning the PDP of consequencesif the Rohingyas were allowed to permanently settle in Jammu or the neighbouring Kashmir province. "They should be placed in one camp anywhere close to West Bengal from where they enter India," he suggested.

Over time, his campaign has gained crucial support. The city's trade union has echoed his demand and allegedly threatened to killRohingyas if they don't clear the area soon.

Several billboards have sprung up across the city. Some of them read: "Wake up Jammu. Rohingyas and Bangladeshis. Quit Jammu." And the others carry a rallying cry to "unite and save the history, culture and identity of [the] Dogras."

Witnessing this growing hostility, Younis is unable to sleep at night. There are 1,200 Rohingya families living in the city and they are feeling equally vulnerable.

"We are not living illegally here," Younis says. "We have the UNHCR cards. How can these parties threaten us when we have gone through all the legal formalities?"

The first three years were peaceful in Jammu, he says, as most of the refugees began working as unskilled labourers at private construction sites. Though they were paid half the wages compared to local labourers, they chose not to complain.

"If we start negotiating prices, then nobody will give us work," says Mohammed Ali, a Rohingya refugee labourer. "At the end of the day, we are refugees, not citizens."

Now the looming threat of physical assault from the far-right vigilante groups has affected their mobility. Most of the refugees have stopped exploring the city for work.

A few months ago, Ali, learned that his sister, who was stranded in Myanmar, had fallen ill and was in need of financial support. Ali sold his cell phone and raised $250, including his savings.

"I have been totally broke after sending [financial] help to my sister," he says.

"And my sister could not live."

The Rohingyas have faced tragedy after tragedy. The cycle is endless. Last November, a major fire broke out in a refugee settlement in the city's Narwal neighbourhood, killing five Rohingyas and destroying 56 shanties. The families spent several weeks under the open sky, braving the cold weather. The cause of the fire is unknown since the police didn't investigate it.

The refugee slums are littered with heaps of trash: plastic bottles, polythene bags, rotten food and old newspapers. The refugee kids rummage through the trash to extract renewable waste.

Mohammad Noor organises the ragpicker kids and buys their collections. He then sells the trash to hawkers outside the state.

Noor, 25, wears a skull cap and sports a pitch-black beard. He fled Myanmar in 2012 and came to Jammu. There he married a woman from the refugee community and began working as a labourer in private construction. He also collected junk in his free time.

After becoming the father of two, he rented a piece of land in a suburb and built a hut out of wood and polythene sheets. Of late, he has been struggling with pangs of paranoia. He envisions a future full of uncertainty. He believes the far-right groups will succeed in forcing the local government to evict them, pushing him and his family back onto the streets.

Noor says ever since the local trade union joined the BJP's anti-Rohingya campaign, the contractors have stopped hiring them.

"There isn't much work left for us here. Initially contractors would come and take large groups of labourers from our slums, but everything has changed now," he says.

Tahira Begum, 25, recently became a widow after her husband was electrocuted while fixing a high-voltage power line that supplied electricity to their refugee settlement.

The mother of two children, Begum now works at a walnut factory, where she extracts the nuts from their shells. She earns $1.20 per day.

Tahira is in the process of reconciling herself with the loss of her husband. The thought of facing another displacement in his absence is making it harder, however. She is just one of more than 450 widows from the refugee families who are unlikely to survive another displacement.

The anti-Rohingya campaign has gained momentum in the past few weeks. Other political outfits have joined the BJP's chorus, accusing the community of all sorts of crimes – from selling drugs to aiding local Kashmiri militants involved in the region's indigenous freedom struggle against Indian rule.

On April 11, another right-wing Hindu group, Bajrang Dal, hosted a rally in the city. They were far more menacing than other groups. Brandishing swords and tridents, they drove across the city on motorbikes, chanting anti-Rohingya slogans.

The rally sent shivers across the refugee settlements. "If we would have known earlier that we would be treated like this, then we wouldn't have come here," Tahira says. "We would have preferred to die in Myanmar." Majid Maqbool is a journalist based in New Delhi, India. Raqib Hameed Naik is a journalist based in Jammu City, India. 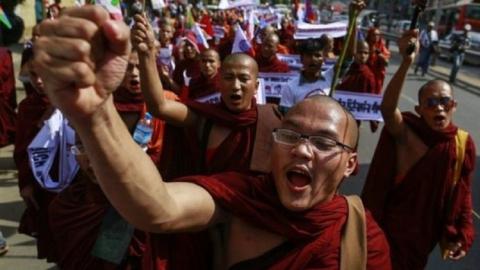 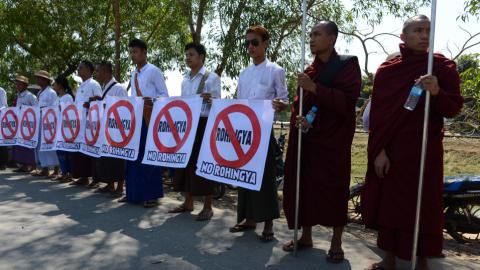