Is the US seeking new YPG-free alternatives in northern Syria?

A US special envoy to Syria recently held a meeting with the Kurdish opposition to the YPG in Turkey's south, sparking speculations about Washington’s long-term goals.

ISTANBUL — The US Special Representative for Syria Engagement, James Jeffrey, met with senior members of the Syrian Kurdish National Council (ENKS) on December 8, to discuss several possible scenarios for the war-torn country.

The ENKS also fought against Bashar al Assad's regime, but their political campaign was later sabotaged by the YPG.

Jeffrey's outreach to the group is an interesting turn of events, especially considering Turkey's long-standing concerns with its NATO ally over Washington's growing partnership with the YPG in northern Syria. The YPG is the Syrian wing of the PKK, which is recognised as a terrorist organisation by both Turkey and the US.

Ankara has long maintained that there are other 'legitimate' Kurdish groups like the ENKS that Washington could rely on in its fight against Daesh. The US, however, stuck with the YPG, causing a severe strain to bilateral relations between the two countries.

TRT World spoke to a senior ENKS member Ali Ibrahim, who was part of the five-member delegation the US representative met in Turkey's southeastern Gaziantep province over the weekend.

“What we noticed was that the US needed to take the views of all [other than the YPG],” Ibrahim said, adding that Jeffrey's approach in the meeting indicated the US was keen to build new relationships in northern Syria.

Ibrahim said though the meeting lasted for one-and-a-half hours, nothing concrete about the US's future plans in northern Syria were discussed.

Washington denies any connection between the YPG and the PKK, though Ankara has produced concrete evidence to prove the two are related.

“The YPG is part of the PKK. And we emphasised this to the Americans,” said Ibrahim.

Ankara has long suspected the US of favouring the YPG, with designs on creating a Kurdish-dominated autonomous region, which would pretty much be a mirror image of the Kurdish autonomous region it carved out in northern Iraq in the 1990s soon after the first Gulf War.

The YPG claimed “cantons” or autonomous regions across much of northern Syria in 2012 in the wake of the civil war after the Assad regime withdrew from the region.

TRT World previously reported that the withdrawal was orchestrated in an alleged deal between the YPG and the regime, setting forth conditions that the group would prevent any Kurdish support of the anti-Assad opposition.

The PKK and the Assad regime share a history of working in tandem. For two decades from the late 1970s, Syria provided safe havens and training camps for the PKK and its founding leader Abdullah Ocalan, who stayed in the country until 1998.

Since Turkey has a 900km border with Syria, “it’s not possible to accept [any future YPG-run] Kurdish state alongside its border,” Ibrahim observed.

Can the ENKS replace the YPG?

Ibrahim said the ENKS represents the diverse social fabric of the region and compared to the YPG the group can do a much better job in tackling any security threats.

“The ENKS believes in accepting others. It’s not only the council, but other [Syrian Kurdish] parties and NGOs that also believe in coexisting with the people of other backgrounds,” he said.

The YPG has been accused of suppressing the Kurdish opposition, including the ENKS, and of fomenting demographic shifts across northern Syria. The group's role in forcing Arab populations to leave has been widely criticised. Ibrahim himself is one of the Kurdish exiles who has been living in Turkey since 2014.

In the past, the ENKS challenged the emergence of the PYD, the political wing of the YPG, in northern Syria on the grounds that the political group and its militant and ideological mentor, the PKK, have long collaborated with the Assad regime, silencing the voices of opposition.

According to Ibrahim, the meeting in Gaziantep was part of the new US initiative to engage with  different players in northern Syria. The US officials also met with locals in Manbij, a contentious Syrian town located to the west of the Euphrates River, where Washington and Ankara recently agreed to hold joint patrols.

US officials held another meeting in Kobani, a Syrian town, where the YPG has established one of its so-called cantons. Ibrahim is from Kobani and he's remotely leading a branch of the ENKS there.

“The future is cloudy," he said. "But we need a conference where all [the stakeholders] can agree on the future of Syria. The wounds must be healed.” 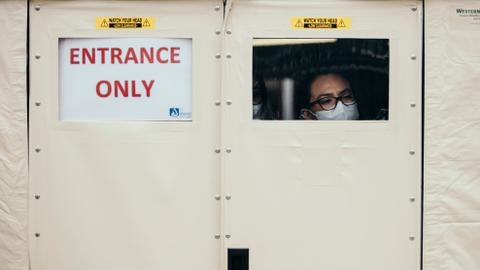 Why are black Americans suffering more from coronavirus?

In pictures: Life in migrant camps in times of the coronavirus pandemic 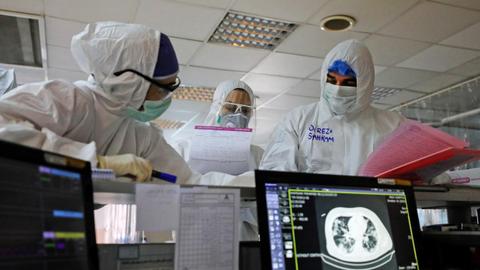 How Muslims, from businessmen to sports stars, are helping fight Covid-19