What did YPG and Daesh gain from fighting each other?

The moderate Syrian Kurdish leaders argue that YPG expanded its reach, fomented demographic changes while fighting Daesh and also drew a deep wedge between the Arab and Kurdish communities.

MERSIN, Turkey — Prior to the fateful battle of Kobani in northern Syria in 2014, Mustafa Ali Mousto says that he played the dangerous role of being an arbiter between Daesh and the PKK's Syrian extension YPG. The PKK is regarded as a terrorist group by Turkey and the US.

The 49-year-old Syrian Kurdish lawyer, Mousto, took up the challenge in hopes of saving tens of thousands of civilians from coming between the barrels of the two fighting forces. Both Daesh and the YPG have bad human rights records. While the former shocked the world with brutal beheadings and a rampage across Syria and Iraq, the latter adopted iron-fisted tactics to crush dissident voices emerging from within the Syrian Kurdish community.

By July 2013, the two sides were coming close to fighting a full-fledged war. "We saw the clash between Daesh and YPG was going to hurt people," Mousto told TRT World.

Mousto was a member of ENKS, an acronym for Syrian Kurdish National Council, a political group that believes in an inclusive Syria with all the ethnicities living peacefully alongside each other. "As one of the leaders of  ENKS, I was responsible for mediation. I along with two more ENKS leaders went to see Daesh representatives. The YPG knew about it," he said.

As the war in Syria culminated into several proxy groups fighting under different regional and international agendas, Mousto's attempts to broker a truce between Daesh and YPG ended up pushing him into exile in Turkey.

He now lives in Turkey's southeastern province of Gaziantep. His wife and five children accompany him.

He's a chain smoker and speaks with a mild rasp, fitted to a man on whom smoking has taken a toll.

Mousto said he engaged in talks with Daesh for more than three days in a small town west of Kobani named Shuyukh, where the members of Daesh, YPG, Al Nusra, and leaders of other opposition groups participated.

Mousto said Shuyukh, a predominantly Arab town, was central to the negotiations. Daesh and other Arab-dominated fighting groups like Al Nusra Front wanted towns like Shuyukh and Jarablus under their control. But the YPG had different strategic ambitions for the Arab towns ringing its Kobane canton.

Why was he chosen as a negotiator? He said there is one reason: he is a Syrian Kurd but has earned a reputation for speaking against both the YPG and the Assad regime. His political affiliation, the ENKS, challenged the emergence of the PYD, the political wing of YPG, in northern Syria on the grounds that the PYD and its militant and ideological mentor, the PKK, has long collaborated with the Assad regime, silencing the voices of opposition.

ENKS opposed the PYD’s oppressive policies toward other Kurdish parties, such as banning them for disagreeing with the PYD, imprisoning and assassinating anti-PYD figures.

On the first day of talks in late July, Mousto returned home with fatigue and a feeling of discomfort.

“I feared very much for his life,” Mousto's wife Nadya recalled. “I tried calling him several times but could not reach him at all.”

Nadya said since Mousto was engaging with groups that are known for carrying out deadly violence, she had sleepless nights until her husband returned home.

But the following day, Mousto went back to the Arab town Shuyukh to continue the reconciliation talks, hoping to strike a deal. Against all odds, he managed to secure a deal.

According to the deal, Mousto said, the Arab-populated territories would be held by the fighting groups led by Arabs, and the Kurdish enclaves would be held by the YPG, even though it meant going against the will of the majority and sidelining groups that defied both Daesh and YPG. A prisoner exchange between the YPG and Daesh and free movement of people between the Kurdish and Arab territories were some of the main features of the deal.

They also agreed on standing against the Assad regime in Damascus, he added.

But as Mousto made it back to Kobani, he was met with bad news. “When we got to Kobani, the YPG said they can't accept these conditions,” Mousto said, betraying a hint of frustration.

Mousto said that some FSA-affiliated commanders warned him that if the YPG doesn't follow the terms of the deal, things were going to get complicated.

Soon after, Mousto said, the YPG began to take over Arab-populated towns. And in return, Mousto's wife Nadya said, Daesh killed some of the Kurdish prisoners – doctors, engineers and lawyers – in Jarablus. "YPG wasn't affected by those killings because the prisoners were well-educated and most of them did not support the YPG," she said.

But by March 2014, Daesh started launching "surprise attacks" in YPG-held territories. About 10 days later, the YPG and its political wing PYD called on "all Kurdish groups"  to unite against Daesh.

Prior to the March attack, the YPG leadership was raising its pitch, seeking US support. By September 2014, the US-led coalition, following the YPG's inputs, bombed Daesh-held areas in northern Syria.

Over time, as Daesh lost territories to both the US-backed YPG and the Syrian regime, the terror group was also facing resistance from other Arab-dominated fighting groups.

Beneath the showdown between the YPG and Daesh, however, one significant dynamic changed in northern Syria. The moderate political groups like ENKS that espoused secular, democratic ideas were first overshadowed and later persecuted by the US-backed YPG.

Mousto said the region was divided along stark ideological lines with the YPG claiming to be the sole representative of Kurds and Daesh peddling its own radical agenda by mobilising Arabs.

For Assad, Mousto said, chaos in Syria gave him an opportunity to portray himself as a better option compared to other extremist groups in the country.

Amidst the chaos, he said, the fighting sides and their proxies forged new alliances and often switched sides to survive. Sometime in early 2013, he added, the YPG made a deal with Jabhat al Nusra, which translated into both sides "trading in arms and oil." Many senior ringleaders of Nusra reportedly joined Daesh as the armed group gained ground by 2013.

After capturing Raqqa from Daesh, the US-backed SDF, whose backbone is the YPG, allowed hundreds of Daesh militants to leave the self-proclaimed capital of the group last October.

The YPG, according to the Turkish government, has used Daesh militants to fight against Turkey-backed FSA forces during the country’s Afrin operation.

Cevat Ones, former deputy director of Turkey's national intelligence agency, MIT, said Daesh and the YPG are poles apart when it comes to examining their ideological grounds. But he maintained that "in terms of psychological warfare, sometimes certain nation-states tend to find links between ideologically distant terrorist groups."

“In war zones like Syria," Ones told TRT World. "There have been constant changes and shifting alliances on the ground. As a result, armed groups can have tactical alliances on a temporary basis. In Syria, it's possible Daesh and YPG could have had such an alliance.”

ENKS, Mousto's political organisation, also tried to find new allies in Syria. They cultivated support in Liwa Tawhid, an armed opposition group with a moderate political outlook that fought against the Assad regime under the supervision of the FSA commanders.

"But Liwa Tawhid couldn't do anything either. Al Nusra eliminated Liwa Tawhid. And eventually, Daesh emerged as a strong force,” he said.

A year later in July 2014, Mousto said he left Kobani, citing threats to his life. Soon after, he moved to Turkey, his house was targeted by the US-led coalition. Mousto said it was a hit job, accusing the YPG of feeding the US-led air raid with the coordinates of his house, which was completely demolished.

Mousto said both the YPG and the Assad regime needed an enemy like Daesh to render genuine opposition groups irrelevant, which also resulted in the weakening of ENKS.

The way the Assad regime used Daesh's presence as an excuse to carry out large scale massacres, he said, was the same way the YPG played up Daesh's threat to silence or eliminate opposition from within the Syrian Kurdish community.

"So YPG and Daesh gained a lot by fighting each other," Mousto said. 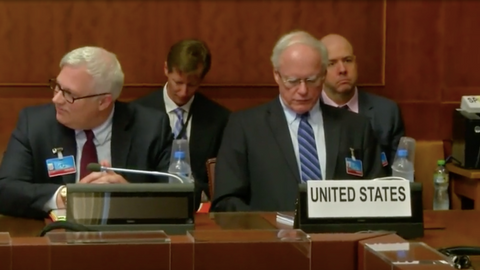 Is the US seeking new YPG-free alternatives in northern Syria?