With the Lebanese currency in free fall and steep hikes in rent prices, Lebanese and refugee families are increasingly unable to keep a roof over their heads.

Insecurity has been a fixture of Fahed’s life ever since he left his hometown of Raqqa in Syria nearly a decade ago. But over the last year, the 31-year-old has had to struggle to even keep his family together amid the country’s economic meltdown.

When the pandemic hit and the government imposed a strict lockdown last year, Fahed saw what little work opportunities he had – working day jobs, mostly in construction – evaporate. The Lebanese pound was going into free fall, losing as much as 90 percent of its value in two years. Inflation skyrocketed and the average cost of food increased by more than 400 percent between October 2019 and June 2021. Increasingly, families have to make difficult choices about how to spend their money.

Last April, Fahed’s landlord gave him an ultimatum when the young family of three fell behind with rent payments.

“He told us he would seize our belongings and furniture,” he tells TRT World from the Bekaa Valley town of Ali al Nahri in eastern Lebanon.

“I tried to talk to him, tell him to take it easy, but he just said I have been patient enough with you.” At the time, the family had a couple of months of rent arrears.

They had no choice but to leave the house and separate. Fahed moved back in with his parents, three brothers and little sister, while his wife and three-year-old went to live with her family so that she could have privacy, Fahed says.

“My parents' home is very small. It's a one bedroom place, formerly a stable,” he says. “It’s got no windows, it’s not a proper home. It was already very cramped because of my family.”

Lebanon, a country of just over six million people on the southern coast of the Mediterranean, hosts at least 1.5 million Syrian refugees, the largest per capita refugee population in the world. Still turning the corner after the end of a 15-year civil war in 1990, since 2019 the country has been in the grip of a financial collapse that the World Bank has ranked among the top three most severe crises since the mid-19th Century.

His family is now back together, after two NGOs intervened to resolve the dispute with his landlord and provide rent assistance. But Fahed worries that once the cold winter sets in the Bekaa Valley, he could have to separate his family again. In October, the government removed state subsidies on all fuel products. Now, 20 litres of gasoline costs nearly half the monthly minimum wage.

“In Lebanon you have two choices now: either you buy food or you buy fuel,” said Fahed.

Just like every crisis, Lebanon’s economic downfall from a middle income country to one where even the middle class is unable to make ends meet, has surfaced existing inequalities and distortions. These have now left a large segment of the population in inadequate and insecure housing conditions, while more and more families live under threat of eviction.

“In pre-crisis Lebanon, housing was already way too expensive for the [average] person, especially in the city,” Jana Haidar, an architect and a member of the Public Works Studio collective in Beirut, told TRT World.

Haidar coordinates a project called the Housing Monitor, which has an online platform for reporting evictions and other housing-related issues.

Unaffordable rent, she explains, has led to the mushrooming of informal settlements on the one hand, and informal renting on the other. Their sample data on migrant workers and refugees shows that less than four percent of those surveyed had a written agreement with their landlord, while UNHCR data shows similar figures for Syrian refugees.

“You have landlords who rent units that are not meant to be housing units, like garages or basements or makeshift spaces,” Haidar explains.

“It's a situation which disproportionately affects migrants and refugees, who are by default in worse economic conditions,” she added.

“What happened in the crisis is that these situations were exacerbated. People who were able to afford better are now doing worse, so they are going to have to resort to such housing situations.” Legal status and the lack of a social network of support further expose the most vulnerable.

According to Elena Dikomitis of the Norwegian Refugee Council (NRC), an increasing number of families are approaching the NGO’s community helpline in Lebanon for housing assistance.

“We see an increase in people requesting financial support to cover the rent compared to previous months,” Dikomitis told TRT World. “Most of them mention having at least three months’ debt in rent payments.”

Haidar says the Housing Monitor has received several reports of large rent hikes in the last few months, particularly in Beirut. Out of 40 cases the Monitor documented in their latest quarterly report, more than half reported huge rent increases. In one case, a Lebanese family living in Bourj Hammoud, a suburb in north-east Beirut, had seen their rent double over the last year. When they raised objections, the landlord asked them to leave. There was no written contract.

Less commonly, some landlords have been requesting payments in US dollars, pricing housing out of reach. Many homes lie empty in Beirut and elsewhere due to an inflated real estate market.

For his part, Fahed was no stranger to evictions before last year. Not long after he arrived from Syria with his family, they were evicted because, he claims, “the landlord didn’t want any Syrians."

UN data shows eviction threats in Syrian refugee communities have been on the rise since 2018, but Dikomitis points to a fundamental difference in that the majority today are due to rent arrears.

“The trend is mainly seen for individual eviction threats,” she explained.

“In 2019 and before that time, most of the eviction cases we came across in refugee communities were of a collective nature where a group of refugees was being evicted for reasons mostly unrelated to late rental fees.” Human rights groups have condemned such evictions in the past as discriminatory.

Fahed has been mulling the idea of paying smugglers to get out of Lebanon, even if it would mean once again separating from his family, and it could take years before they are reunited. The journey, depending on the destination, costs thousands of dollars, and for now he doesn’t have the money for it.

“One person should go, the rest will follow,” he says. “It's only going to get worse here.” 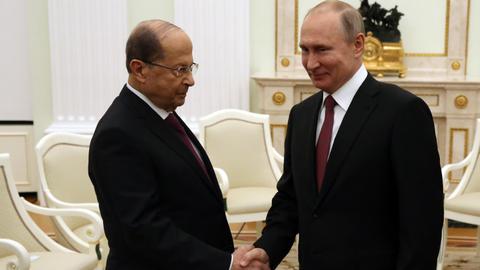