The rampant use of pellet guns has destroyed the lives of several thousand people, but New Delhi still considers it a 'non-lethal' weapon. Here's a view from the hospital where the newest victim, a toddler, was treated.

SRINAGAR, India-administered Kashmir — Twenty-month-old Heeba is one of the youngest victims of India's recent clampdown on protesters in the disputed Kashmir region.

On November 25, the Indian paramilitary forces shot at Heeba using a pellet gun, a volley of round metal balls puncturing her right eye.

TRT World  meets Heeba at a local hospital in Srinagar, the capital city of India-administered Kashmir.

Heeba struggles with pain. Her mother, Mursala Jan tries her best to comfort her, sometimes with a candy or roasted chickpeas.

On the morning of November 25, Jan and her children were at home in south Kashmir's Shopian district. Outside, people were protesting against India's rule as a firefight between local rebels and Indian armed forces raged.

The police fired several rounds of tear gas shells to quell the protests, heavily polluting the air. Jan and her children felt shortness of breath and a choking sensation.

“The second storey of our house has no windows, so a lot of tear gas smoke came inside,” says Jan.

The 25-year-old mother grabbed her children, made an attempt to leave the neighbourhood and save her family from suffocation.

But the moment she opened her front door, she heard a loud bang.

"I shut the door back, but pellets already ripped through the door net," she said.  "Some pellets hit my right hand and some hit Heeba's right eye."

Jammu and Kashmir is a Muslim-majority region with several districts and provinces. It's a disputed territory between India and Pakistan since the British left the subcontinent in 1947. Both countries are controlling parts of this Himalayan region.

Heeba is one of the latest victims of this long-standing dispute. The United Nations has called for a plebiscite, but both India and Pakistan have failed to agree on having one.

“Perforation by pellet has led to vitreous haemorrhage and traumatic cataract," said a doctor who has been treating Heeba for the last few days. "Though she’s showing good improvement, we can’t say anything right now about the eyesight. There’s possibility she might regain 40-60 percent of vision, but first we'll have to see if her retina is in a good shape or not.”

Heeba will have to undergo another surgery this week. If it succeeds, the doctors can ascertain whether she can regain her full vision.

From 2016, at least 1,400 eye injuries inflicted by Indian armed forces have been reported in the ophthalmology department of Srinagar's SMHS Hospital, where Heeba is also receiving her treatment.

About 22 patients were completely blinded in one eye and about 80 people were partially blinded.

A pellet gun is a pump-action shotgun, commonly used for hunting, which fires a cartridge containing up to 500 small round or irregular shaped lead balls. Once shot, the cartridge bursts and the pellets disperse in all directions with high velocity.

The Indian government considers the pellet gun a ‘non-lethal’ weapon, even though it has killed  at least 14 people and damaged the eyes of several thousand people since its introduction in 2010.

Amnesty International India launched a postcard campaign and online petition to #BanPelletGuns in January this year. Aarabu Ahmad Sultan is a freelance photojournalist based in India-administered Kashmir. 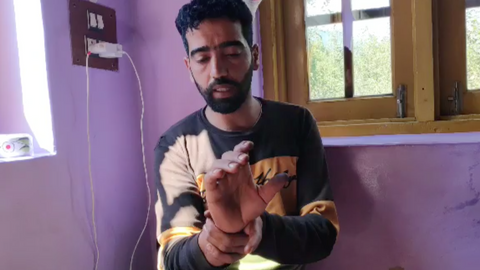