We speak with health experts to make sense of the latest data coming out of South Africa, and how far it will apply elsewhere.

Three weeks after the new Omicron variant was first reported in South Africa, prompting several countries around the world to close their borders to much of the south of the continent, scientists see early signs that the new variant may be milder than previous ones. Omicron has now been detected in around 60 countries.

A study published on Tuesday by Discovery Health, South Africa’s largest private health insurance company, suggests that while Omicron is highly contagious, the country has seen a flatter trajectory of hospital admissions compared to previous waves – indicating it causes a less severe illness. The study, which is based on real-world data looking at the first three weeks of the Omicron outbreak in South Africa, also shows that existing vaccines may not be as effective against the new variant, but still provide a good level of protection. This early-stage conclusion is based on more than 211,000 positive Covid-19 test results.

This appears to align with insights from virologists and hospitals since the World Health Organisation (WHO) designated the new variant as “of concern” on November 26. Scientists were alarmed by the number of mutations detected on its spike protein, the main target of the body’s immune responses, which would make it more likely to reinfect people previously immunized through either vaccination or infection. There was also concern that some of the changes had previously been found in other variants, and were linked to the ability of the virus to spread more quickly.

But experts have warned that the rest of the world should apply caution in taking the South African case as an indicator of how the variant could behave elsewhere.

“A good example is that when Covid-19 started in Europe, we expected more or less the same to happen in Africa in terms of the mortality rate and the severity,” Dr. Portia Mutevedzi, a senior epidemiologist at the University of Witwatersrand in South Africa told TRT World.

Among others, epidemiologists and policymakers should take into account that South Africa has a large youth population compared to, for instance, some European countries and North American countries.

“But we can use some of what is happening in South Africa to inform on what will probably happen to the rest of the world in terms of disease severity,” she added, “and we need to take into account vaccination levels.”

While preliminary data and anecdotal evidence from South Africa suggest the Omicron variant may be less lethal, caveats remain.

The study published by Discovery Health shows that after adjusting for vaccine status, the risk of hospital admission with Omicron was 29 percent lower for adults. The variant now makes up for more than 90 percent of infections in South Africa, where it has fuelled a fourth wave characterized by a steep increase in new infections and test positivity rates – indicating high transmissibility. Deaths have also not reached the peaks of previous waves.

But the researchers warn the high levels of previous exposure to the virus may explain the low levels of hospitalisation. WHO chief Tedros Adhanom Ghebreyesus similarly advised this week against underestimating Omicron as a mild disease.

According to accounts shared by researchers, patients admitted to hospitals during the three weeks accounted for in the study had milder symptoms and shorter stays, while only 16 percent of those admitted to ICU were vaccinated.

Gauteng province, which has been the epicentre of the Omicron outbreak in South Africa, is a case in point. 72 percent of the population in the province is thought to have been previously infected, particularly during the Delta wave. It remains unclear then how the new variant is going to evolve in other countries with lower rates of previous infection.

The latest study shows that two doses of the Pfizer-BioNTech vaccine provide less protection overall than with previous variants.

However, the two doses still provide 70 percent protection against severe complications requiring hospitalisation. This is a drop from 93 percent in South Africa’s Delta-driven variant, but still a good indicator overall, researchers say.

Protection against infection is significantly lower than with previous variants: just 33 percent, compared to 80 percent in earlier waves.

The new data confirms that the risk of reinfection with Omicron is significantly higher compared to previous variants.

“Overall, the risk of re-infection has increased over time, with Omicron resulting in significantly higher rates of reinfection compared to prior variants,” explained Shirley Collie, Chief Health Analytics Actuary at Discovery Health. People infected with Delta in South Africa’s third wave face a 40 percent relative risk of reinfection, while those infected with Beta in the second wave go up to 60 percent.

Are children more at risk?

The preliminary study suggests that while serious complications are less likely to appear in adults, children appear to be at higher risk of hospitalisation with the new variant compared to the first wave. But researchers point out that the number of admissions of children to hospital remains low in absolute terms.

“In as much as we're seeing an increased number of children being hospitalised in this wave compared to the previous three waves, this is not to say that the disease is more severe in children. A lot of the hospitalisations that happened in the first few weeks were due to cautionary measures,” Dr. Mutevedzi told TRT World, explaining that children are more likely to be put under observation than adults are.

“That said, we need to keep a close eye on children less than 12 years old, the group of people that have not been vaccinated,” she added.

Responding to speculation about how the virus could be mutating to become a mild seasonal flu, Mutevedzi said “it's really still too early for us to say that the virus has adapted and we need to stop worrying.”

“What this story can show is that vaccination really is one of the most important public health interventions in terms of controlling infectious diseases.” 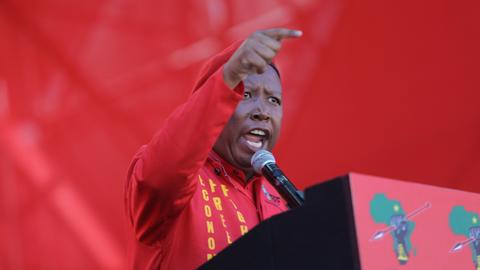 What does Julius Malema want?