France's Republican party has held a primary that has whittled down the number of Republican presidential candidates to two. There's also the far-right National Front's Marine Le Pen as a formidable rival. And the Socialists? Don't ask.

France is headed for presidential elections in April 2017, and the contenders are slowly emerging. With the left in shambles, many think the race will come down to a showdown in May between the right and the far-right.

Nationalist rhetoric has figured prominently in the recent elections of other key Western powers. The British public voted to leave the European Union, then Donald Trump won the US presidency. Other European countries, such as Hungary, have seen growing support for their respective far-right parties, in part as a reaction to public resentment to migration policies.

"It's the whole political spectrum that shifted to the right that's really a major trend in French politics," said Philippe Marliere, professor of French and European politics at University College, London.

He believes it has to do with Marine Le Pen, the leader of the far-right National Front, who has driven the other parties to move more toward the right than they were in the past. She has been successful at making anti-Muslim and hardline secularist rhetoric mainstream.

Le Pen is the national-conservative leader of the National Front and the daughter of Jean-Marie Le Pen, its founder. The party defends economic protectionism, which aims to protect national industries by placing tariffs and quotas on foreign imports, and opposes immigration. It also wants France to stop using the Euro, and is sceptical of the European Union and its supranational policies.

Marliere says, in addition to Le Pen's influence on the right, "you could argue the Socialist party in office has been also not very left-wing."

The Republicans, France's leading centre right-wing party, held their primary on November 20. Because none of the seven candidates were able to win 50 per cent of the vote, there will be a runoff on November 27 between Francois Fillon and Alain Juppe, the top two candidates. Former French president Nicolas Sarkozy came in third, which eliminates him from running for the presidency.

Whoever wins the Republican party runoff has a good chance of becoming president of France by beating the far right's Le Pen. However, pollsters have been wrong before: most recently about the outcomes of Brexit and the US election.

Even though President Francois Hollande, the incumbent Socialist, is eligible to run again, he hasn't yet said whether he will.

"No incumbent president has ever done that, Marliere says, contemplating the possibility that Hollande might not run again. "He's so weak that he might decide not to."

Manuel Valls, Hollande's his prime minister, also hasn't yet indicated whether he will run in the Socialist primaries.

The Socialist party, France's leading force on the centre-left, will be holding primaries on January 22, 2017 to elect their presidential candidate. Should any candidate fail to receive 50 per cent of the vote, as happened in the Republican party's primary, there will be a runoff election the following weekend.

The Socialist party is struggling to find unity. The party's yet-to-be-announced candidate is predicted to have a hard time winning enough votes in April to win the French presidency. Hollande is suffering from approval ratings of a mere four percent -- the lowest of any French president in decades.

In addition, the right-wing opposition has called for his impeachment for disclosing classified information to journalists.

Hollande gave about 100 hours of interviews to two journalists from the French daily Le Monde. The resulting book, whose title translates to A President Shouldn't Say That..., stirred controversy among his allies and enemies alike as soon as it hit the shelves in October.

Claude Bartolone, the Socialist president of the National Assembly, told the French newspaper La Provence that Hollande was lacking "a certain discretion."

"A president shouldn't make so many confessions," Bartolone said.

Sarkozy criticised Hollande for being "talkative."

Meanwhile, Emmanuel Macron, Hollande's former economy minister, announced last week he would stand as an independent, not as a Socialist.

Marliere says he's never seen the left "so weak and desperate." So desperate, in fact, that there have been reports that some left-wing voters have participated in the Republican primaries.

"They did that with one idea in mind, which was to stop Sarkozy," Merliere says. "He came back with a very right-wing campaign again and he lost because that was really too much. He led a campaign which was borrowing very much from the National Front themes on immigration, on identity, talking a lot about Islam, and even the conservative electorate was put off by that."

Merliere says the left's involvement in the Republican primaries was a sign that "electorate voters have already accepted that the left will not feature strongly in the elections."

Jacques Reland, senior research fellow at the Global Policy Institute, argues that Hollande's bad image is not necessarily deserved. He predicts, however, that if Francois Fillon becomes the presidential candidate, he will have a better chance at winning the presidential election than Hollande or any other candidate from the left.

"If the left were united they would probably win the election, but they're not united so (Francois) Fillon will probably sneak in," he says. "When you look at Hollande's record he's quite good, he's fulfilled most of his promises and there's been loads of little reforms."

Back at the Republican party, Fillon, who has been endorsed by Sarkozy, will face off with Alain Juppe.

Fillon served as Sarkozy's prime minister for five years, after a stint as foreign minister. He had been trailing Sarkozy and Juppe until the final days of the two-month campaign, yet he ended up getting more than 44 percent of the vote.

"I fought for my beliefs with passion… I did not manage to convince the voters," Sarkozy said. "I have great respect for Alain Juppe, but Francois Fillon's political choices are closer to mine."

Sarkozy's loss came as "a big surprise, a good surprise" to M'hammed Henniche, secretary of the Union of Muslim Associations (UAM) in France. Henniche says after Sarkozy's elimination from the presidential race, "all Muslims (in France) are happy."

Speaking about Marine Le Pen, Henniche says she has shrewdly changed many of her positions, building bridges with Jews, homosexuals and other minorities, for example, while "remaining only against Muslim or Arab citizens." He thinks her "politically correct" stance - except when it comes to Muslims - "is a big danger… because we (French Muslims) are isolated."

Several polls suggest that Juppe, Fillon's competitor, would beat Le Pen, but there's less data about how Fillon would fare against Le Pen. A September poll by BVA shows Fillon beating Le Pen 61 per cent to 39 per cent, and Juppe beating Le Pen with 66 per cent.

A moderate, inclusive conservative, Juppe seems to be popular with the divided left. A Socialist voter who spoke to AFP said he participated in the right-wing primary so that he could vote "against Sarkozy."

"I'm fed up with that guy, he thinks he is all-powerful and he has been involved in too many scandals," said Eric, a sports teacher in his fifties, who declined to give his surname. "Juppe, despite everything else, is the opposite."

Fillon has been called "the epitome of the traditional provincial right" by the British newspaper The Guardian. A Catholic from a small French village, he voted against same-sex marriage and rejects adoption by gay couples.

"Economically [Fillon] appeals to the more liberal wing of his party. They want tax cuts for the rich, they want cuts in public spending, and so on," Reland said.

"On social issues he's very conservative. There are many on the right who are not socially conservative -- they would have preferred Juppe."

Fillon wants to increase weekly working hours for the public sector from 35 to 39, as well as cutting 500,000 jobs. He is an admirer of late British Prime Minister Margaret Thatcher, and wants to introduce economic liberal policies that would break with decades of mainstream French policy.

"He wants the same policy which is the same as Thatcher in the 1980s and the French people won't like that at all," Reland says with a chuckle. 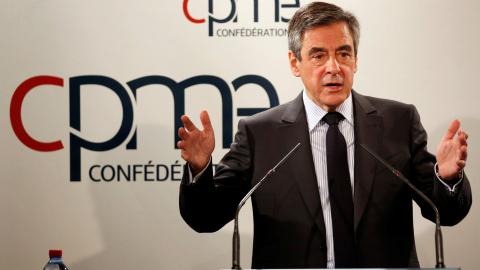