1
Is the US trying to woo Turkiye over the Ukraine crisis?
2
Israel orders probe into police misuse of controversial hacking tool
3
Iran, Russia and China begin naval manoeuvres as tensions with US persist
4
Can a cancer drug inducing weight loss in mice work on humans too?
5
Crashed World War II aircraft discovered in Himalayas after nearly 80 years

Egypt’s Al Azhar, central to Islamic education and religious life for centuries, has lost a lot of its shine under Sisi’s regime.

Across the Islamic world Egypt’s Al Azhar and Tunisia's Al Zaytuna are regarded as the two oldest functioning educational institutes, both of which were originally built as mosques respectively in the 10th century and the 8th century.

For over 1000 years, the two educational institutions have served as the main centres of Islamic learning alongside natural and social sciences, graduating an untold amount of students, including an historical icon like Ibn Khaldun.

But more than any other Islamic learning institution and organisation, which included Al Zaytuna, even in modern times, Al Azhar has stood as a symbol of traditional Islam, where authentic Muslim texts have continued to be taught by its traditionally dressed scholars.

Al Azhar was built by the Fatimids, a Shia dynasty, in 972. It became a Sunni institution after Egypt was conquered by the Ayyubids, a Sunni dynasty, in the 12th century. Al Azhar currently has more than 2 million students and 4,000 teaching institutes across Egypt.

“What makes Al Azhar unique among its contemporaries is its history. Few Islamic institutions of learning have been around for over a thousand years. The only comparable institutions are Al Zaytuna in Tunisia and Al Qarawiyyin in Morocco. Everything else has disappeared,” said Usaama al Azami, a British-Muslim academic and a lecturer in Contemporary Islamic Studies at the University of Oxford.

“Those institutions are older, but don't have the very vibrant and diverse scholarly environment that Al Azhar can boast. Egypt has also historically been a major centre for Islamic learning that has allowed for the existence of all four Sunni schools,” al Azami told TRT World.

The continuous suppression of dissent under successive autocratic leaders from Gamal Abdul Nasser to Anwar Sadat, Hosni Mubarak and most recently Abdul Fattah al Sisi, has taken its toll on Al Azhar and most other institutions.

The loss of its prestige has become particularly apparent after the latest military coup in August 2013, when Sisi ousted the country’s first-democratically elected President Mohammed Morsi, who passed away in a courtroom hearing last year today.

“The era of the coup is considered one of the worst ages that passed on Egypt and Al-Azhar. The da’wah [invitation to Islam & Islamic learning] and preachers suffered a great scourge that caused the decline of the da’wa in various fields,” says Dr Jamal Abdul Sattar Mohammed, a former Professor at the College of Islamic Dawah at the Al Azhar University.

After the coup, Dr Mohammed was one of those academics forced to leave Al Azhar. He arrived in Turkey in 2014 and has since lived in exile in Istanbul along with several others.

“The coup and the military-dominated rule resulted in Al Azhar losing a lot of its status and respect in the hearts of people in the era of Sisi because it implicated the institution in shameful situations that contradict the intuitions of religion and its constants,” Mohammed told TRT World.

Mohammed is of the opinion that  Al Azhar has lost its reputed status as a leading Islamic learning institution.

“It became clear that the security services are the ones that manage Al Azhar, and that they control [much of what the institution produces],” Mohammed said.

Al Azami from the University of Oxford also thinks that Al Azhar has been increasingly politicised in modern times under Egypt’s autocratic regimes.

“The modern Egyptian state became extremely aware of the significance of Al Azhar, going back at least to the time of Gamal Abdul Nasser [former Egyptian president]. For him, there was always a concern about independent centres of power. A 1961 law brought Al Azhar into the domain of the state, so the institution no longer enjoys any financial independence,” al Azami said.

Before the autocratic takeover, the Sheikh of Al Azhar or the Grand Imam of Al Azhar, which was institutionalized by the Ottoman Empire in the 16th century following the conquest of Egypt by the Ottomans, would be elected by the Committee of Senior Scholars.

Under Nasser, the committee, which was founded in 1911 as an organ of the independent waqf or foundation, was replaced by the Center for Islamic Research, which became part of the government structure under the Ministry of Awqaf or Endowments, five decades later.

“Al Azhar had complete independence from an administrative point of view. The election of the Sheikh of Al Azhar was one of the tasks of the Committee of Senior Scholars only, but the committee was canceled during the era of Abdel Nasser,” Mohammed, the former Al Azhar scholar, said.

As a result, the Egyptian president began appointing the Sheikh of Al Azhar according to his own criteria, which has more to do with politics than Islamic learning or any proper scientific status, according to Mohammed.

“This made the Sheikh of Al Azhar as more representative of the [oppressive] political system than that of scholars,” Mohammed reflected.

While most regular scholars at Al Azhar have apparently done their best to continue independent research, the top management of the institution has been under the thumb of autocrats in Cairo.

Al Azhar’s politicisation process has shown its results. During the Arab Spring protests, the Grand Imam of Al Azhar, Ahmed al Tayep, issued a statement in favor of the Sisi regime.

“The Sheikh of Al Azhar Ahmed al Tayep called the then-President Hosni Mubarak as the legitimate ruler and he found any participation in the protests against his rule (religiously) illicit,” Sen told TRT World.

Tayep was also a former member of Mubarak’s National Democratic Party’s policies committee. Since the late 1970s, the party had led Egypt single-handedly without any real contest until its collapse in 2011 after the Arab Spring protests.

Following the short-lived democratic transformation, Tayep also backed the military coup of Sisi in 2013 against the democratically elected president and its government.

The Sheikh of Al Azhar also leads an important organisation, the Supreme Council of Scholars, whose top management has also been dominated by pro-regime personalities.

“A lot of its leadership are respected scholars. But a number of them are also extremely closely associated with the military autocracy of Egypt. The obvious person is the Sheikh of Al Azhar [its rector]. But you also have people like Ali Gomaa, the former Grand Mufti of Egypt,” al Azami said.

“These sorts of people have very often been supportive of the Sisi regime, broadly speaking. Gomaa in particular supported its massacre of hundreds of unarmed pro-democracy protesters in 2013," al Azami said.

"I think such behaviour has done much damage to the reputation of Al Azhar today,” Azami concluded. 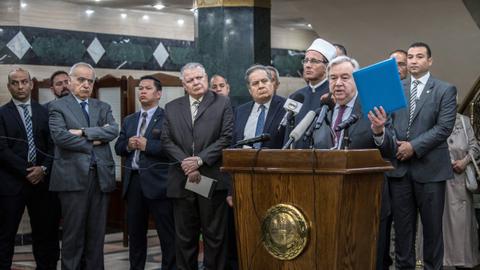 1
Is the US trying to woo Turkiye over the Ukraine crisis?
2
Israel orders probe into police misuse of controversial hacking tool
3
Iran, Russia and China begin naval manoeuvres as tensions with US persist
4
Can a cancer drug inducing weight loss in mice work on humans too?
5
Crashed World War II aircraft discovered in Himalayas after nearly 80 years