Syrians reject Denmark's claim that Damascus is safe for their return

Denmark wants to send Syrian refugees back to Damascus while avoiding any diplomatic arrangement with the Syrian regime. Who will ensure the returnees’ safety?

Joud Jannar Bashour can’t recall any good memories from Syria. Much of the country’s younger generation vividly remember the protests against the autocratic leader Bashar al Assad, leaving their memories scarred with events like military men setting up checkpoints at street corners and men disappearing for speaking up against the regime.

At the age of nine, Bashour spotted two strangers outside his school looking for him and his 11-year-old sister Tulip. Sensing danger, they managed to escape from them and reached home. Their father told them that the men were sent by the regime.

Bashour's father had a friend who was kidnapped for speaking against the Assad regime. The regime sought a heavy ransom from his father, who had no savings.

Bashour said his father feared that he might be the next target, even though he had never criticised the regime in public, so he decided to leave the country.

“Before we left, we had one problem. Now we have two,” tells Joud TRT World.

“I’m at the age of mandatory military service and my father is at the risk of getting killed,” he say, contemplating what is likely to happen if they return to Syria.

For 18-year-old Bashour, returning to Damascus would mean forced enlistment for the very same military that hounded him and his family out of Syria.

This ugly prospect of getting conscripted in the Syrian military seemed all too real after Bashour received a letter from Danish Immigration Service on March 3. He was asked to return to Damascus and abandon everything he had built in Denmark in the past few years.

Bashour arrived in Denmark in 2015 after taking a long, arduous journey from Lebanon, where he had spent three years, via Turkey and Greece. He is one of those refugees who made it to Europe after taking a dangerous sea journey on a dinghy. But that means nothing to the Danish authorities who told him to return immediately or face consequences: a transfer to one of the country’s so-called departure centres in a remote rural area, where he may be stuck for an unknown period of time.

In the north of Damascus, the city where Bashour is asked to return, there’s Saydnaya, the notorious military prison known as the signature “slaughterhouse” of the regime. It is still up and running. The regime has issued hundreds of death certificates in the past few years including the ones belonging to people who had disappeared or were picked up, tortured and killed in prison cells.

“Damascus or Syria can’t be safe for anybody to return to Syria,” Omar Alshogre, the director of detainee affairs of Syrian Emergency Task Force, an NGO closely tracking down disappearances in Syria tells TRT World. “The regime doesn’t forget.”

Alshogre is also a former prisoner. A torture survivor from the Saydnaya prison, his testimonies became a means to build cases against top Syrian regime officials who were sanctioned by the United States’s Caesar Act.

“After I came to Sweden, the guard who tortured me in prison in Syria called me and threatened me,” he says. “What do you think would happen if I return? They’d slaughter me”.

His conviction is not solely based on his own experience but also based on the stories of refugees who attempted to return under different kinds of pressures.

If you return to a regime-held area in Syria after fleeing Europe, it’s almost certain that you’ll be a prisoner, he says. Mazen Hamada, a former prisoner and refugee in Berlin, was among many others who returned to Syria.

Many wondered why Hamada, a well known activist in the Syrian exile community, decided to return despite being aware of the risks. Alshogre explains he was tricked into believing that he will be safe in Syria and that the regime wouldn't harm him. His flight via Beirut was even paid by the regime.

“We can imagine him being tortured, if not killed yet,” he says.

If Damascus was safer, 33-year-old Nevien al Rahlal would be the first person to book a ticket back from Denmark. She left her children behind in Syria in 2014, thinking she would make her way into Europe and then bring her children too.

Rahlal said her options were stark and limited. “I’d either stay (in Syria), get arrested, or most likely get killed and my children would miss me forever,” she says on the phone, sobbing quietly.

“Or, I’d leave them for a year or so, take the risk of dying on the way to Europe. But if I survive, then we could be together again.”

Rahlal's fault was that she had shared a Facebook post criticising the regime -- an act of dissent many pro-regime teachers couldn't digest and reported their colleagues to the police.

One of her colleagues informed her that if he showed up at school the day after sharing the post, she would most likely be arrested.

She went into hiding for three months until she sneaked into Lebanon with her father, thanks to a regime soldier whom they bribed for a safe passage.

In search of asylum in Europe, the father and daughter lived in Lebanon, Algeria, Tunisia and Libya until they arrived on the shores of Denmark, which seemed to have lighter restrictions on family reunions at the time. She learned the Danish language, and now prepares to study in college again. She wants to become a nurse.

Her residency will expire on April 23. If the country’s Refugee Board won’t overturn the decision she would be pushed to the edge again and the future will be full of dangers and uncertainty.

“They wanna show the anti-refugee (Danish) people that they’re doing something 'good' by sending us back,” she says. “Some people blame us for not being fully integrated, not learning the language, not paying taxes.”

She feels even if she comes up with all the evidence proving she will be in danger in Syria, it would most likely mean nothing to the Danish government. 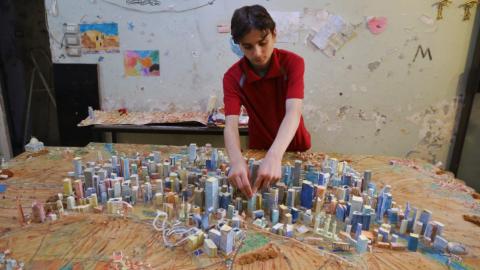