The far-right has managed to overpower most of Europe's law enforcement and judicial systems, encouraging the perpetrators of hate crimes to feel emboldened.

On a cool Saturday evening, Sinan Kog, a Turkish-German factory worker, had a family reunion at an ice-cream parlour in Wiesloch, one of the old towns with a mere 20,000 people in midwest Germany.

Kog, his wife Sevda, their 13-year-old daughter and a family cat were joined by Kog's brother, who came with his wife and children. Kog had been living in the neighbourhood for over a decade. The ice-cream shop had become one of their favourite spots for weekends.

“Everybody knows us and we know everybody here," Kog told TRT World.

The brothers and their families were having a good time until a crowd of men walked down the street, chanting slogans that sounded like a military marching song.

They thought the crowd was full of football fans because a friendly match between Germany and Peru was scheduled for the next day in Hoffenheim, a city near Wiesloch.

But a man in black clothes came out of the group, stared at the Kog family and shouted "Heil Hitler.”

The family ignored the man, thinking he was drunk, but they again heard him say, “We are Germany!” and “We are the people.”

In recent years, Russia's President Vladimir Putin has been engaging with his Turkish counterpart Recep Tayyip Erdogan to resolve the Syrian crisis.

Hearing that, another German man who watched the scene from his apartment window above the ice-cream shop, shouted at the unruly group, asking them to back off. By now, it was clear the marchers were neo-Nazis and known for their hatred for Germans whose parents or grandparents have moved to Germany from elsewhere, especially from Turkey.

The neo-Nazis went berserk, throwing chairs and tables at the family gathering and beating the brothers up.

While hitting the family, not even sparing women and children, they chanted racist slogans, "Foreigners out" and “You f**king foreigners."

“They smashed my head with beer bottles. My whole body smelled like beer,” Kog said.

The family cat ran away out of fear. Kog’s daughter followed the pet. She found a police car. She told the officers that her father was being beaten by neo-Nazis. Though the police station was just 500 metres away from the ice-cream shop, the policemen said they were short on men and wouldn't prefer to stop the assault.

“If the police came, the attackers would have left,” Kog said. “My daughter and wife were yelling and crying out of fear. When they finally arrived late, they began berating them instead.”

Far-right or a new European current

For the Kog family, Wiesloch was the "city of love." The attack left a deep psychological scar on them.

They became yet another testimony of rising hate crimes fuelled by the rise of the far-right and neo-Nazi groups not just in Germany but in several parts of Europe.

Many observers think these far-right movements are mostly gaining strength from both the continent’s long-standing misunderstanding of Islam and the rise of populism.

“For a long time, we have argued that the rise of the far-right is strongly related to [Europe’s] hostility toward Islam,” said Burhan Kesici, a German-Turkish political scientist, who is leading the Islamic Council of Germany.

“In recent years, historical [Western] resentments toward Islam resurfaced as Islamophobia,” said Musa Serdar Celebi, a prominent Turkish nationalist, who is the founder and the honorary president of Turkish-Islamic Union in Germany.

There is no particular enmity or hate toward Italians or French in Germany, Kesici said, adding that Arabs or Turkish people are more likely to face hate and acts of violence.

“Because of the religion factor, it happens. We have concrete data from 2017, which has documented more than a thousand incidents. Most of the hate acts are against Muslims.”

The anti-immigrant hatred has even penetrated Sweden, a state where liberalism was considered to be at the heart of the government. The far-right Sweden Democrats (SD) made significant gains in recent elections. The party is driven by neo-Nazi ideology. Sowing seeds of hatred against the immigrant communities is one of its main agendas, jeopardising the country's reputation of being one of the most welcoming nations for migrants.

Similarly in France, the far-right National Front (FN), which was renamed the National Rally by the party’s leader Marine Le Pen, has been maintaining third place in French politics. Le Pen has often made anti-migrant remarks and vocally despised the presence of Muslims in Europe.

In May, she hosted the leaders of Europe’s far right movements in France’s Nice to develop a continental political alliance. Her father, Jean-Marie Le Pen, the founder and the previous leader of the FN is known for making statements like  Hitler’s gas chambers were a “detail” of WWII, even calling the Nazi occupation of France "not particularly inhumane." The senior Le Pen came second in the 2002 presidential elections

The Freedom Party (FPO) in Austria became a part of the country’s coalition government. Its presidential candidate  lost the election with a small margin.

Italy, a key member state of the European Union besides Germany and France, is also experiencing the rise of right-wing populism. The League party clinched an unexpected win in recent elections, even taking power in leftist strongholds. The League’s leader, Matteo Salvini, became the country’s interior minister after the elections.

Like Western Europe, other far right movements are also making strong showings in Eastern European countries like Hungary, Poland and Slovenia. Hungary overwhelmingly reelected Viktor Orban as president. An anti-migrant and Islamophobic politician, Orban hasn't shied away from launching racist tirades, which led the EU to put sanctions on Hungary.

Back in Germany, in the face of strengthening neo-Nazism, the political picture is getting grimmer than ever. Most of the far-right movements around the world have roots in Germany’s Nazism founded by Hitler in the 1920s.

Despite numerous witness testimonies and strong connections between German intelligence agencies and the NSU cell, a German court gave a life sentence to just one defendant, sparing others who reportedly worked for the country’s intelligence apparatus.

Less than two months after the weak NSU court verdict, east Germany witnessed anti-migrant protests led by neo-Nazi groups because a Cuban-German man was allegedly killed by two migrants from Iraq and Syria.

The Alternative for Germany (AfD), a far-right German party, is now the third largest political group in the parliament. Even Germany’s newest leftist Stand Up party, which aims to unite the country's divided left to oust Merkel’s conservatism, perceives  Europe's so-called “welcome culture” for migrants as a problem. The party has unabashedly taken controversial stances on several issues to please the German right, and essentially agreeing with the terms set by them.

“We have all kinds of programmes on deradicalisation, anti-radicalisation, anti-terrorism, and anti-extremism concerning so-called “jihadi” movements. But we have little or too few efforts to develop programs to prevent right-wing extremism,” said Cemil Yilmaz, a Dutch-Turkish social psychologist.

While the European political class is proactive in dealing with radicalisation in minority groups, the surging right-wing groups that are violent in nature have been ignored, Yilmaz said.

“If you look at anti-extremism policies, you will see a double standard about what they do against minority groups compared to [what they do] with the far-right,” Yilmaz told TRT World.

European media also plays a big role in the rise of far-right movements. “Most of the media professionals are white,” who often want to discuss issues related to multiculturalism, ethnicity and identity in an aggressive and biased manner, Yilmaz said.

The lack of discourse on racism alienates minority community, pushes them away from the German mainstream.  It leaves people like Kog confused about his family’s future in the country.

“I used to fear only car accidents, when my daughter went to the city centre to hang out,” Kog said. Considering the fast changing circumstances in Wiesloch, he and his wife are now discussing the possibility of selling their properties in Germany and moving to Turkey.

“I've lost my trust in people,” he said. 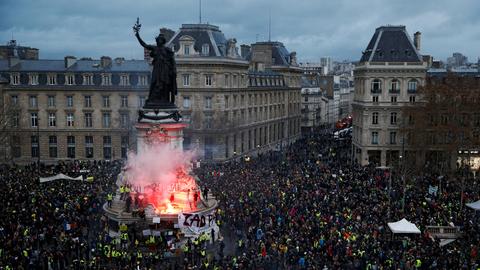