In the wake of the recent Tunis terror attack, a group of artists performed before a young audience in the capital city, encouraging them to reject the 'the culture of death' and embrace 'the culture of life.'

TUNIS — “Stop, Wait, Rethink” reads a poster inside the auditorium at Tunis Business School. Some students are coming in, others are hanging around by the coffee shop. In the great hall, on stage, three young people are ready to give an opening speech and introduce the first guest of their event entitled No Labels: Humanize.

Less than a month after the suicide attack in central Tunis, a group of young enthusiastic change-makers named Gravel the Label stepped forward and organised a cultural event to raise the voice of tolerance in a society where extremism is starting to take a violent turn.

“We realised that young people are not engaged on the issue of extremism. We felt like we would take the lead and speak up on that”, said Hamdi Abidi, co-founder of the youth movement.

“Terror attacks are to instil a culture of death in the community. I insist on fighting for a culture of life,” said Anis Couchène, a renowned artist performing slam poetry. On October 29, he was on Habib Bourguiba Avenue near where the suicide bomber blew herself up.

Showcasing some of his poems, he charmed the audience with his words of peace and tolerance switching between Tunisian dialect and classic Arabic.

His wise and moving lyrics in Peace be Upon You speak out against racism and fanaticism.

“Peace that we are not living in,

“I don’t fear that you’re different from me because I am part of you and you are part of me.

“Today let’s try to dive deep in understanding each other.

“Let’s try to embrace, with our souls, our differences.”

In This Land is for All  the poet invites people to consider diversity and difference of views an asset.

“Be a Jew, a Christian or a Muslim, whether Sunni or Shia.

“Or even be an atheist. Be black or white. But be yourself. Don’t be ‘them’

“And in your uniqueness, excel,

“Live freely oh son of Adam! For this Earth is for ‘all.’”

The artist explained: “Through my poetry I speak to my own society and the wider Arab society. I call on the human being, I focus on the importance of human values.

“A lot of people follow me. I just do my part and I’m happy it works,” he added.

Although Couchène’s poems are particularly known among Tunisian youth, his words reach a large audience of every age and social class. He seeks to create a public conscience among young people since, he believes, they are the ones who can make a change. The poet often gives talks in Tunisian schools.

The highlight of the event came when Raouf Ben Yaghlane entered the scene. He is an acclaimed playwright, theatre director, actor and cultural producer, active in both Tunisia and France.

Bringing bags of energy on stage, the actor gave a mind-blowing performance spanning a special selection of his multiple black comedy plays that death with corruption, illegal immigration and terrorism in Tunisia in a provocative yet funny way.

“He’s one of the greatest artists in Tunisia, and he has a big influence on youth. Inviting him in this event was crucial”, commented Abidi.

Back in 2013, Ben Yaghlane was shaken by the double assassination of opposition leaders Mohamed Brahmi and Chokri Belaid, two political killings that took place in the same year. Never before had his native country known terrorism, he noted.

“Faced with this, the artist cannot stay quiet. It’s not just a threat against our security but also against thought and culture”, he observed, saying that following the twin murders of 2013 he felt he had the duty to explore extremism in his artistic work.

That’s when the preparatory work for his famous play Terroriste moins quart started.

The playwright dipped his toes into an investigative project that took him around his country consulting security experts, sociologists, criminologists, university professors, Muslim religious leaders and talking to young people.

Travelling from north to south, stopping in cities, towns and villages, he went to meet young people in universities, schools, poor neighbourhoods, public places and cafes especially where a large number of Tunisian youth are detected as potential targets by terrorist recruiting networks. He ran workshops and organised discussions over terrorism inside cafes.

“Cultural action can expand the perspective of a young person at risk of brainwashing and recruitment for terrorist activity”, Ben Yaghlane argued. “In that sense, preventing and combating terrorism is a cultural fight, and the artist must be on the frontline.”

An explorative journey into radicalisation that the actor says was worth two-and-a-half years.

Troubled by the new emerging threat, he asked himself why his peaceful homeland could have young people potentially ready to fight alongside Daesh (ISIS) or carry out terror attacks. Then, he came to realise that any young man with the potential to become a terrorist is a “terrorist minus a quarter”, in which the quarter equals to the “battle field”, or the socio-cultural conditionings, during which the young person can be either drawn to join an extremist group or be saved.

He said: “I have a terrorist minus a quarter in front of me. How can I stop him from becoming a 100% terrorist?”, adding that it is crucial not to let obscurantism be the answer to the young people’s worries.

In his successful social comedy, the main character blames his author for an unfair presentation of himself refusing to comply with the profile of "terroriste moins quart" which would justify his eventual acceptance into a terrorist group that promised him access to heaven. The author rejects his excuses considering that nothing would justify joining terrorists, and opposes categorically the character’s desire to become a whole terrorist and not a quarter. He makes the public his witness insisting that people should resist the danger of turning to terrorism. The character is convinced and seeks the help of the author to be freed from the illusion that trapped him.

Ben Yaghlane recited some dark humorous passages from his play: “If you’re the author, and you say you won’t abandon me to them, find me a solution. The terrorists look for me and find me, and you do nothing to save me from them.

“You’re the author. Write that I can find a job not far from where I live, that there is a school nearby, a hospital, a bus that takes me back home. Just to improve my situation. So when the terrorists come to me, I can tell them ‘No’.

“They did everything to trick you, get you to believe that your fate is to join them. Well, it’s the opposite. As an author, I won’t let you go with them. I’m the author, I’m the one who decides. You’re the character, I’m your creator.”

As soon as he finished his performance, the artist joined the young crowd in the auditorium to interact with the students and open a debate. The audience was very responsive answering his questions, giving their opinions about the show, encouraging him to present the play widely across the country, expressing great interest in the idea of tackling the terrorism issue through theatre. The students insisted on the need to give young people a cultural input, provide them with the means to express themselves.

In the aftermath of the latest terror attack in Tunis, the No Labels: Humaniz event served as a wake-up call to Tunisian society giving the microphone to motivated young people who are willing to break through discrimination and extremism. 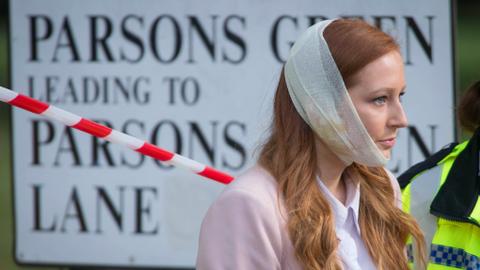 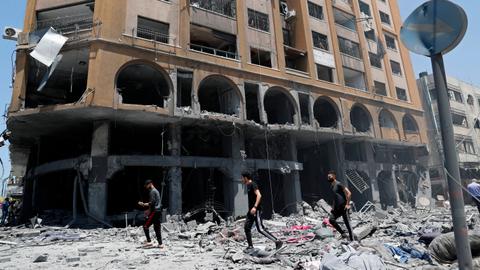