The southeastern district neighbouring both Iran and Iraq was affected by the PKK’s armed campaign for about three decades. But now the city is hosting its first ever film festival, a sign of it moving toward peace and normalcy.

HAKKARİ  —  On the evening of September 25, the central district of Hakkari in eastern Turkey had a festive atmosphere. A procession of people dressed in colourful clothes with drummers taking the lead passed through the streets of the city centre. The mostly Kurdish-populated district is hosting its first ever film festival, which started in early August. Turkish celebrities have been thronging the district ever since.

A decade ago, it was hard to imagine Hakkari in a state of celebration. Enmeshed in a deadly armed campaign led by the PKK, which is considered to be a terrorist organisation by the US, EU and Turkey, the people of Hakkari survived violence for about three decades. The PKK launched its first attack against the Turkish state in Hakkari in the summer of 1984, announcing its secessionist agenda across the country. The security situation deteriorated in the following years. The threat of armed assaults loomed so large that various governors who served the district at different times chose to live alone, keeping their families away in different cities.

But in Hakkari today, people seem to have left their grim past behind. With the government hosting the first ever film festival in the district, announcing the screening of 14 movies for a month, a crew of Turkish celebrities featuring in the upcoming movie Goc Yolu (The Migration Road) visited the city on September 25. Goc Yolu was screened at a local community hall.

“Frankly, me and my friends feared a little bit before our arrival here,” Turkish actress Hulya Diken, who has a leading role in Goc Yolu, told TRT World. “But it was not like what we thought. Locals welcomed us with great enthusiasm. They are all friendly and beautiful people.”

It was Diken's first visit to Hakkari. “The mountains here are a bit high — and a bit scary,” Diken said. “But people are warm. They take all the fears out.”

Hakkari has produced some of Turkey’s finest actors and directors like Yilmaz Erdogan, whose plays have inspired millions of Turks.

For people in big cities like Istanbul, Hakkari is a remote frontier town, which evokes nothing but a sense of tragedy and loss.

After the collapse of Turkey’s peace process, which attempted to disarm PKK groups in a peaceful manner in 2015, a large scale military operation was conducted to clean up some cities of the southeastern and eastern Turkey from the PKK groups. As a result, 483 security forces and 400 civilians lost their lives. The military cleared the area, killing 4,949 PKK members.

In the last two years, the Turkish government started rebuilding infrastructure in several conflict-ridden districts. As a result, Hakkari's city centre has seen development with new buildings and freshly paved roads. The presence of armoured vehicles, however, is the only reminder of Hakkari's troubled past, but overall life seems be limping back to normalcy.

"If these kinds of art activities were organised more often, it will help people and the state embrace each other and things will be much better shape,” said Hadi Sonmez, a 64-year-old native of Hakkari.

Cuneyt Orhan Toprak, the provincial governor of Hakkari, came across as a happy administrator with signs of relief clearly visible on his face. “You see our Hakkari. It’s lively,” he said, as he accompanied Turkish celebrities in the street procession.

“In recent years, we have thankfully had a peaceful atmosphere. We are able to host nice events. We are conducting activities in various fields like sports, culture, movies," Toprak told TRT World, as he walked in the procession along with the celebrities and several hundred people.

The governor said that he was proud about another milestone that for the first time in Hakkari’s history, the district's female football team has made it to Turkey’s premier football league.

Unlike previous governors who usually lived a secluded live, Toprak lives with his wife and children in the city centre.

“We can’t take our eyes off Hakkari,” he said."My daughter goes to [a government-run] Cumhuriyet Primary School here. We live here like any common resident lives here and we always tell locals that we like you and embrace you.”

A 13-year-old Hakkari resident, Ozgur Demirel, told TRT World that he would like to see more entertainment-driven events in the future.

“The festival is so beautiful,” said Demirel.

A senior Cultural Ministry official said the local cultural directorate decided to screen Goc Yolu because the movie features the majestic mountains of the Balkans that look similar to the mountains of Hakkari.

Goc Yolu portrays the struggle of Turkish families in the Balkan Wars and how the Christian militias forced them to migrate from their native towns to former Ottoman-controlled territories.

“We always want to create a difference [by showing movies like Goc Yolu],” he said, as he sipped tea in a local cafe, facing the gigantic mountains. 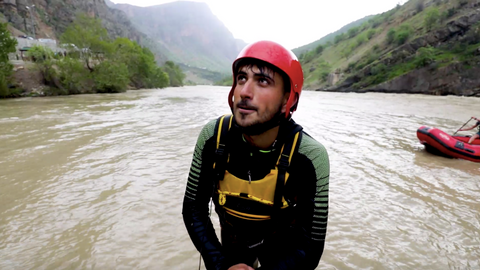