Turkey will not deport dissident journalist to Iran

Mohammad Mosaed, an award-winning journalist whose work, including his reporting on the coronavirus, led Iran to sentence him to nearly five years in prison, won’t be deported.

Mosaed applied for international protection in Turkey after taking an illegal smuggling route from Iran at the eastern border city of Van, the report said. Turkish sources say he will be kept in a deportation centre until his application is resolved.

An investigative business journalist, Mosaed was reportedly about to freeze to death when he contacted the emergency services to ask for help. This led Turkish police to detain him after his treatment in a state hospital.

“We simply won’t deport him, because there is capital punishment in Iran and he is a journalist, not a mobster,” MEE quoted the Turkish security force saying.

Turkey’s decision came after press freedom watchdog the Committee to Protect Journalists (CPJ) released a statement warning that Mosaed may face persecution if he’s deported to Iran, and invited the Turkish authorities to “consider any request for political asylum that Mosaed may make.”

Mosaed’s work, including his reports criticising the government's response to the spread of the coronavirus led the Iranian government to press charges against him, while his work earned him a Freedom of Speech Award by Deutsche Welle. He previously spent two weeks in prison for posting a critical tweet using 42 different proxy servers to access the internet during an Internet shutdown.

An Iranian court in August sentenced him to four years and nine months in prison on charges of “colluding against national security” and “spreading propaganda against the system.”  The court banned him from practicing journalism and using any communication devices for two years. He says his equipment was also confiscated.

“According to the judge of Branch 26 of the Revolutionary Court, my media activities were ‘blackmailing’, ‘crisis-making’, ‘provoking an empty-minded audience’ and ‘breaking the foundation,’” Mossad said, announcing his verdict in a tweet in September.

According to CPJ, Mosaed fled the country after being summoned by the Iranian authorities to begin serving his jail sentence in two days’ time.

Turkey took a similar decision in September, when it detained a prominent Iranian activist Maryam Shariatmadari over an expired residency, then released her instead of deporting her back to Iran.

Concerns about freedom of speech in Iran

Human rights organisations say that in Iran it’s common for journalists to face intimidation, arbitrary arrest and long jail sentences imposed by revolutionary courts at the end of unfair trials.

“State control of news and information is unrelenting and at least 860 journalists and citizen-journalists have been imprisoned or executed since 1979,” said Reporters Without Borders in a statement.

Only in 2020, 15 journalists were imprisoned in Iran, according to CPJ. Iran is one of the world’s top executioners.

Ruhollah Zam, another dissident journalist, was executed by Iran on December 12, 2020 after being abducted in Iraq by Iran’s Revolutionary Guards. Zam was reportedly tricked into travelling to Iraq from France, where he lived in exile since 2009.

The Iraninan government blamed Zam for inciting violence after his work became inspirational in the nationwide economic protests in 2017.

Habib Chaab, an opposition figure was also abducted by Iraninan intelligence in October in Istanbul, Turkey, where a community of dissidents reside. Chaab has been living in exile in Sweden for 14 years. 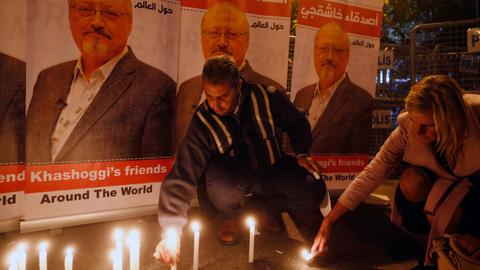