Can the push for an 'Arab NATO' take off if the GCC can't agree on its purpose, and what's behind the US interest in pushing for it now?

The Trump administration is moving forward with its plan to form an ‘Arab NATO’, dubbing it the Middle East Strategic Alliance. The plan is for US-allies in the region to form an alliance with a mandated focus on Iran.

The ‘Arab NATO’ is contentious given Trump's latest statement that became public on Tuesday that King Salman would “not be there for two weeks” without US-backing.

“I love the king, King Salman, but I said, ‘King, we’re protecting you. You might not be there for two weeks without us. You have to pay for your military, you have to pay.’"

Investigative journalist Bob Woodward’s book Fear: Trump in the White House alleges the Trump administration negotiated a $4 billion deal with Saudi Arabia to fund operations in Syria, according to a leaked conversation between Trump and his chief-of-staff John Kelly.

While the idea of an NATO-styled Arab security regime is not new, the push to form it is likely tied to Trump's election bid, as seen in his latest comments regarding his Saudi ally.

This is in line with Trump’s pressure on his Saudi ally to curb rising oil prices and pay for military support.

“All participants agreed on the need to confront threats from Iran directed at the region and the United States” said US State De­partment spokesperson Heather Nauert.

The statement pointed to “productive discussions” on forming the ‘Arab NATO’, based on “a united Gulf Cooperation Council”, without making mention of the ongoing Gulf crisis

Ratcheting up the pressure

The meeting came days after Saudi Foreign Minister Adel al Jubeir called for the overthrow of the Iranian government, asserting that the Islamic Republic was unlikely to change on its own.

"Unless the pressure internally is extremely intense, I don't believe they will open up," al Jubeir said at the United Against Nuclear Iran (UANI) summit on Tuesday in New York.

UAE ambassador Yousef al-Otaiba added his voice to the chorus, claiming that the Iranian threat was "existential".

"Gulf countries, Israel and the countries in the immediate vicinity are the ones at immedi­ate risk," he went on to say, seemingly building rapport with Israel over their common interest in countering the sphere of Iranian geopolitical influence.

The GCC states in attendance do not officially recognise Is­rael, yet seem to have found a common foe in Iran.

Otaiba himself reportedly met Israeli Prime Minister Benjamin Netanyahu last May during a 'chance encounter', where they discussed Iran, according to the AP.

Bahrain itself had publicly backed Israel's right to defend itself in a tweet by its top diplomat in May 2018.

"Some of you might recall our foreign minis­ter tweeted a few months ago and said that every country has the right to defend itself, including Is­rael," said Bahraini envoy Sheikh Abdullah bin Rasheed bin Abdullah supporting the tweet, after claiming Iran was responsible for instigating the mass uprisings in his country.

While the true extent of the Saudi-Israeli alignment remains unclear, a diplomatic source claimed in mid-September that Saudi Arabia had purchased the Israeli Iron Dome defense system to defend itself against Houthi rebel missile attacks.

Can a new alliance work despite the failures of the GCC?

Analysts suggest Trump’s  proposed ‘Arab NATO’ is “structurally flawed” and given that the GCC, which forms the core of the group, has yet to resolve its standoff with fellow-GCC member Qatar. This is further compounded by the proposal of a ‘collective defence clause’ for the alliance, with no comment being made on how it would operate in the current climate.

“The idea of an Arab NATO is wholly unconvincing,” comments Yezid Sayegh, senior fellow at the Carnegie Middle East Center.

“The GCC has failed time and again to agree a joint defence capability, and Saudi Arabia and the UAE have not even been able to wage a properly coordinated war in Yemen, so there is no evidence to suggest they can now organise something as ambitious as an Arab NATO,” he adds.

This view is not shared by the GCC however. Retired Kuwaiti Air Force Col. Zafer Alajmi, believes that the proposed military alliance could unite Gulf countries to an unprecedented level.

“Military structures worldwide proved it can cross all political boundaries. Just as the UK abandoned its economic and political attachment from Europe, it remained a part of NATO” he said

When asked if MESA is meant to restrain Iran from expanding its influence in the region, Sayegh said, “the alliance already exists between certain Arab countries and the US to contain Iran, at least de facto.”

“Is this really only about Iran?” Sayegh questions. “At one level, the idea is about keeping Iran out of the rest of the Gulf or MENA region. But at another, it may serve as a means of ostracizing countries like Qatar, which the Saudis cannot kick out of the GCC or Arab League.”‎

While Saudi Arabia and the UAE have established stances on Iran, the alliance may present a menu of difficult choices to Kuwait and Oman who have historically held good relations and occasional cooperation with Iran.

Qatari Foreign Minister Sheikh Mohammed bin Ab­dulrahman Al Thani spoke out on the developments, emphasising that the alliance should have a strong foundation. He questioned how this could be achieved when key Gulf states remain in a protracted dispute.

"The real challenge facing the US-led alliance is to solve the Gulf crisis," he said.

This is relevant given reports that claim Saudi Arabia and the United Arab Emirates had planned to invade Qatar, until US Secretary of State Rex Tillerson intervened.

The Arab NATO would also struggle with differing threat perceptions, which would pose a challenge to unity.

The Arab index reports that Iran is perceived as the most threatning country to Arab security in Saudi Arabia and Kuwait alone. The remainder of the Arab world prioritises Israel and the US.

Moreover, it found that Arab external threat perceptions take a backseat to pressing problems of challenge of unemployment and poverty. 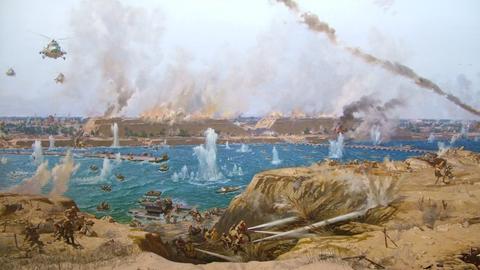 Why can't the Middle East have its own 'Arab NATO'?