The protesting parents say the HDP helps the PKK terrorist organisation recruit their sons and daughters, using brainwashing tactics. And they want their kids back.

In an unprecedented situation, middle-aged and old Kurdish men and women are camping outside the main office of the Peoples' Democratic Party (HDP) in Diyarbakir, one of the most populous cities in Turkey’s southeastern region and an HDP stronghold.

"I came here for my son. I can not leave here without getting my son," said Necla Cur, a 43-year-old housewife from Eleskirt, a district in Turkey's eastern border province of Agri.

Cur and her husband Bedirhan completed an eight-hour drive to join the group of worried and anxious parents in Diyarbakir. Holding photographs of their missing family members, they say the PKK, which is recognised as a terrorist organisation by Turkey, the US, NATO and the EU, used force and coercion to compel their sons and daughters to join the terror group.

PKK's three-decade-long terror campaign against Turkey has led to the deaths of tens of thousands of people across the country. The group deploys various coercive tactics to recruit young men and women as foot soldiers, ripping apart their families.

"We are poor people. We are not  [financially] well-off. He [Vahid] was helping our livelihood," Necla told TRT World.

After a long, harrowing search for Vahid, Cur said she found her son somewhere in the nearby mountains. She pleaded the people living in the area to help her rescue her son, but they told her the PKK commanders bluntly refused to release him.

She said she yelled at a group of men who looked like the PKK militants. They had a heated exchange and in desperation, she wrangled with some of them and eventually lost her consciousness. "When I woke up, they were all gone," Cur said. She remembers spotting several underage children, including a neighbour’s teenage son, at the same location.

"I just want my kid back. It feels like my heart has been torn into pieces," Cur's husband Bedirhan told TRT World.

The sit-in started on August 22, when Hacire Akar, one of the Kurdish mothers, stood outside the HDP building, demanding her son Mehmet's release from the PKK stranglehold. In the following days, the protest gained momentum with at least 20 families with similar stories joining Akar.

According to Aytekin Yilmaz, a former PKK member, who wrote a book titled "They Were Only Children" about the PKK’s policy of recruiting child soldiers, the terror group has recruited 20,000 people under 18 in the last 35 years.

Most Kurdish families in the sit-in accuse the HDP of being the political front for the terror group, facilitating its recruitment of Kurdish young men and women.

Cur said the HDP can help them bring their children back from the PKK camps.

"If they [HDP] tell the terror group 'mothers are crying a lot, they are sad,' they'll return our kids. It’s up to the HDP,” Cur said.

Cur and her husband make a living from farming. Like her, almost every family at the protest site are facing immense financial strains. Many of them suffer from diabetes and other serious diseases.

Fevziye Cetinkaya and her husband Sahap are among the distressed parents from Diyarbakir.

Their 17-year-old son Suleyman went missing two weeks ago. Sahap told TRT World that unemployment made his son vulnerable to the PKK trap.

The PKK from the beginning has been conducting attacks aimed at crippling infrastructure, frightening off investments and threatening small businesses in southeastern Turkey, which has contributed to the impoverishment of local residents.

“You cannot trade your child for anything. Even if they promised to give you all of Diyarbakir, you would not give up your kid,” Sahap said.

"The arrival of offspring brings you major solace, which is worth the world," Sahap said, tears welling up in his eyes. Pointing at the families in the sit-in, he said "there is no rich family here."

"Look at this guy coming from Agri, [pointing Bedirhan Cur]. His clothes are shabby, he's old, out on a limb and looks miserable. You cannot believe how he made it here," Sahap said.

Haci Rifat Yilmaz, a businessman of Kurdish descent and a native of Diyarbakir sees the sit-in as "an internal rebellion" against both the HDP and the PKK.

"For the Kurds, it’s an internal rebellion. Families now openly raise their voice [against the PKK] saying that 'you kidnapped and killed our kids'," Yilmaz,  who is also a member of the American-Turkish Business Development Council, told TRT World.

In the sit-in, there are also families of soldiers kidnapped by the PKK on various occasions. The Altintas family, which is originally from Sanliurfa's Halfeti district, is one among them. The family currently lives in Gaziantep, a southeastern province.

Another victim in the protest was Sevket Altintas, whose son Muslum was kidnapped by the PKK on October 2, 2015. Muslum was on his way to join his military unit in eastern Turkey.

Altintas is enraged at the HDP politicians because they promised him that Muslum would be released soon.

"For years, we have been tantalised by believing lies. But those [empty promises] were exposed as lies at the end. Now I understand that I have to make my decision on my own terms," Altintas told TRT World.

"I am Kurdish. The ones who are inflicting this cruelty on me are also Kurds," Altintas said, adding that the PKK has been brainwashing vulnerable teenagers and young unemployed youth into accepting the radical aspects of the Marxist-Leninist ideology.

"We are here to support the cause of getting our kids back. They have been either kidnapped or deceived or brainwashed."

Despite the hardships that come with rescuing young people from the PKK's hold, Altintas came across as an optimist. "All of this will end at some point," he said.

Aslihan Bedier, Saliha Eren and Hatice Mollaalioglu have contributed to this article. 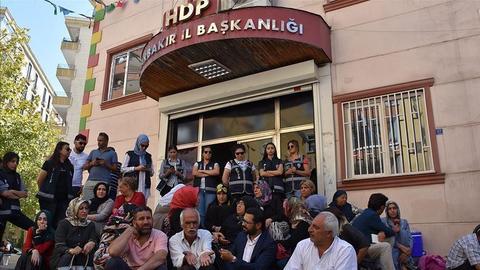