Residents said at least 15 civilians were killed when warplanes targeted workers drilling for water in Beit Saadan, according to Reuters.

At least 21 civilians were killed in northern Yemen in two separate air strikes by the Saudi-led coalition on Saturday.

According to Reuters, residents said at least 15 civilians were killed when warplanes targeted workers drilling for water in Beit Saadan, Arhab district, north of Sanaa, and that 20 other people were wounded.

Residents said Saudi-led coalition warplanes, apparently mistaking the drilling machine for a rocket launcher, bombed the site and killed four workers. The planes returned for a second bombing run when residents of the village rushed to the scene, killing at least 11 more and wounding 20.

A spokesman for the Saudi-led coalition could not immediately be reached for a comment.

At least 21 civilians killed in Saudi-led airstrikes in #Yemen, as fighting intensified before #EidAlAdha https://t.co/CD9ztACsRg

The coalition, which has been fighting to roll back gains made by the Houthi rebels since 2014 and restore ousted President Abd-Rabbu Mansour Hadi to power, says it does not target civilians.

Saturday's attacks were the latest in a series of strikes that have hit schools, hospitals, markets and private homes.

Local media put the number of dead and wounded at the water-drilling site at around 100 and published pictures of burned bodies and mangled equipment, and videos showed workers collecting mutilated bodies and carrying them away in blankets.

The United Nations says more than 10,000 people have been killed in the fighting, many of them civilians. 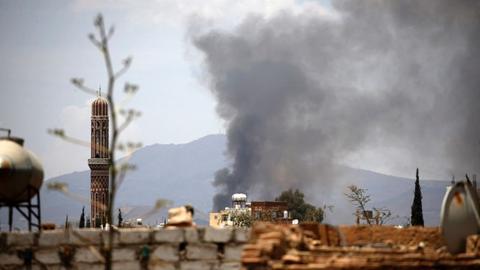