The Syrian regime's offensive in southwest Syria has caused an estimated 270,000 people to flee their homes, the United Nations said earlier. These newly-displaced Syrians require shelter and aid.

Russian air strikes against the opposition and rebel groups in southwest Syria resumed on Wednesday, residents and a war monitor said, after the Free Syrian Army (FSA) said ceasefire talks had failed.

The air strikes targeted the towns of Tafas, northwest of the provincial capital Daraa, and Saida, to its east, the Syrian Observatory for Human Rights said.

Syrian regime leader Bashar al Assad is waging a campaign in the southwest with Russian air support to recapture the region from opposition and rebels and has seized a large chunk of their territory.

Russian air strikes paused on Saturday evening, the Observatory said. The Observatory, along with residents and rebels in Saida, said barrel bombs were also dropped on Saida on Wednesday evening.

Fighters have been negotiating with Russia since Saturday over a deal to end fighting by accepting the return of regime rule and giving up heavy weapons, but they have not been able to agree to the terms.

"The talks with the Russian enemy in Bosra al Sham have failed because of their insistence on handing over heavy weapons," Abu Shaima, a spokesman of the central operations room representing the main Free Syrian Army factions negotiating with the Russians said.

Another opposition spokesman Ibrahim al Jabawi said the talks did not reach any conclusion.

Russia wanted heavy weapons handed over in one go. The opposition wanted to surrender them in stages after tens of thousands of displaced people returned home, he said.

The first round of talks on Saturday prompted the opposition to walk out, saying Russian terms amounted to a humiliating surrender. Jordan persuaded them back to the negotiating table, official sources said.

Numerous towns in the southwest had already struck their own surrender deals with the regime in the teeth of the army advance and aerial bombardment, independently of the main opposition factions.

Warfare in southwest Syria is sensitive to neighbouring Jordan and Israel. The area is also a "de-escalation zone," as agreed by Jordan, the United States and Russia last year to reduce fighting.

Although Washington warned it would respond to violations of the agreement, it has done nothing so far and the opposition groups have said the United States told them to expect no American military help.

Jordan's Foreign Minister Ayman Safadi held talks in Moscow with his Russian counterpart Sergey Lavrov earlier on Wednesday, and said a humanitarian catastrophe risked unfolding in southern Syria if there were no ceasefire.

Lavrov said all Syria-related issues were likely to be discussed at the coming summit meeting between US President Donald Trump and Russian President Vladimir Putin.

The fighting in southwest Syria has caused an estimated 270,000 people to flee their homes, the United Nations said on Monday. 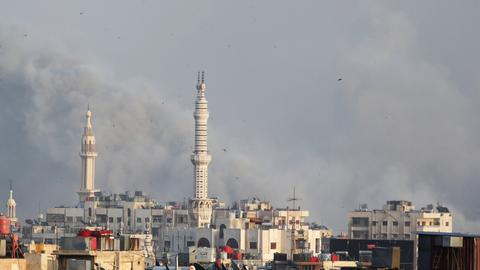